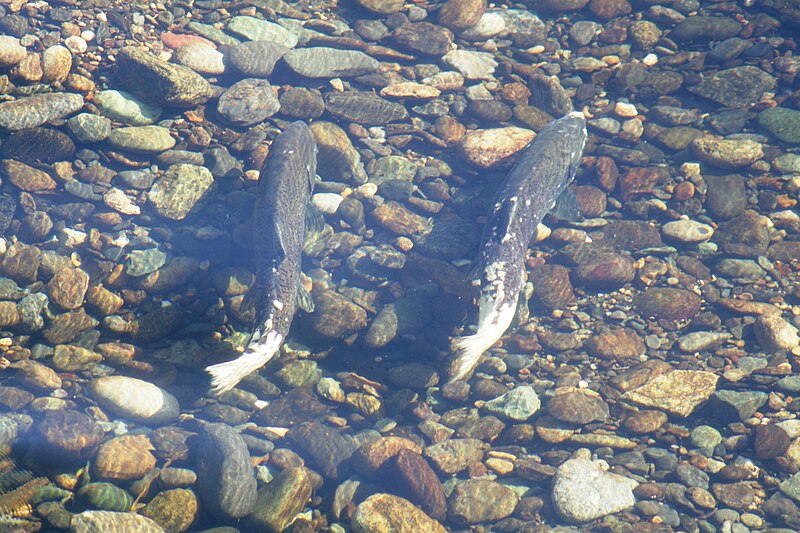 It didn't start out that way.

My trout buddy grew up in a life like a lot of us: something good, something bad.

One of the very good things in his life was his buddy George. I never met George. I only met the outcome of George's efforts.

George must have been a helluva guy.

Anyway, George liked a salmon trip and when he became ill enough that he couldn't make the trip, I was offered a chance to step-in. I had a blast.

And it's my seat in the boat now.

I'd name this run for George but that somehow doesn't seem quite right, either. A lifetime perfecting the outdoor pursuits cannot be tied to something as small as a single trip. This is the Amber Liquid crew's trip and if George were around, he'd be a welcome member.

Salmon run here in Michigan and with a little cool and a little rain, it can be just the entry into fall that does a fellow right. You need hot coffee from a thermos in the morning - and maybe a little whiskey chaser.

Hook-ups do all the better with a little scotch in the drizzle. Helps break the disappointment of not setting the hook hard enough or not keep the slack out of the line on that first hesitation before the run.

Don't look at the cards until they're all dealt out.

I'm going with a guide who keeps his mouth shut except when there is something important to say - and that important means about the fish. Outside of the boat the rest of the world doesn't exist. He'll answer any direct question, ask the requisite niceties in the most abbreviated fashion, and focus on the fish.

Nothing like a guide who helps you focus on the fish. Can't stand any other type.

I've got an outfitter in Canada I love. He's a great guy. Put him in a boat and he can't stop jabbering. Wears a fellow out. It's his boat and his cabin and his airplane and he's damn nice about everything even when you're being a damn fool. He won't shut-up, however.

I like fish because they don't talk. They're the opposite of young women.

Close friends have vices like expensive whiskey and trout and sometimes fast cars and occasionally airplanes.  Politics maybe. Yes, politics. They don't have women vices - unless they married it.

I marry women I cannot afford. I fish for trout. See a pattern?

Moreover, it's salmon with a guide who will keep me from making a damn fool of myself and look the other way quietly when I do. He'll put me on fish and let the rest come.

Pretty good outing - but then I'm fishing with a good friend who will be in the front of the boat and what good is a fish-of-a-lifetime if not for someone who shares that joy?

Even if I'm just filling in for someone else's lifetime.

The barrier to entry is however too damn high.

Email ThisBlogThis!Share to TwitterShare to FacebookShare to Pinterest
Labels: salmon