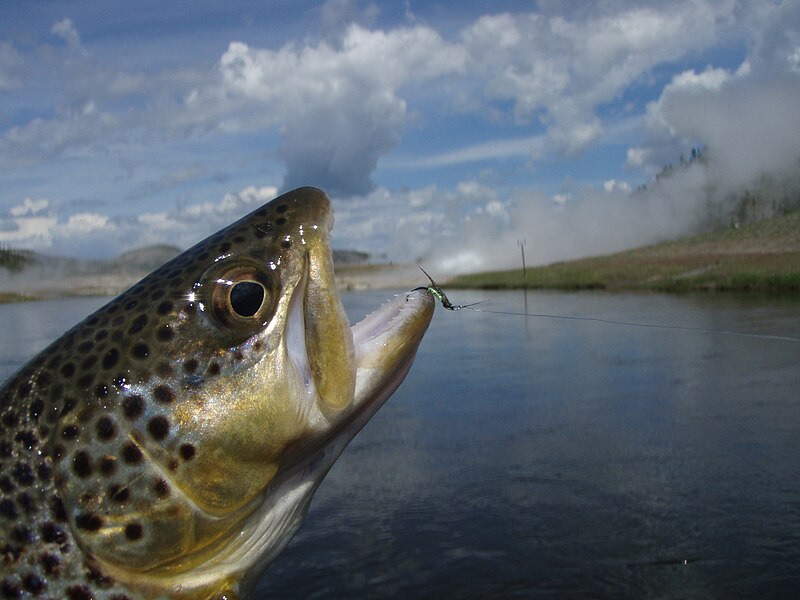 At left, a brown trout on the Firehole River courtesy Mike Cline who graciously released this image to the public domain. Thanks, Mike! Image hosted on wikicommons.

The trout has taken a soft hackle fly. Lovely picture. Tons of personality in that trout.

I'm gathering intel for the big outing to Yellowstone.

I'm putting in my roadwork to be ready both for Rocky Mountain National Park (8200' at Beaver Meadows) and Yellowstone (8000'). I'm a flatlander and I suspect I need more than a three mile trot endurance. I'm working on it.

I need to get out on the water but the vocational concerns bit hard this spring as I knew they would. Things should get better as we age into June. Should help.

The rivers are coming down and bug are coming up. Could be an epic bug year.

I need to go trout camping.

Back to the salt mines. 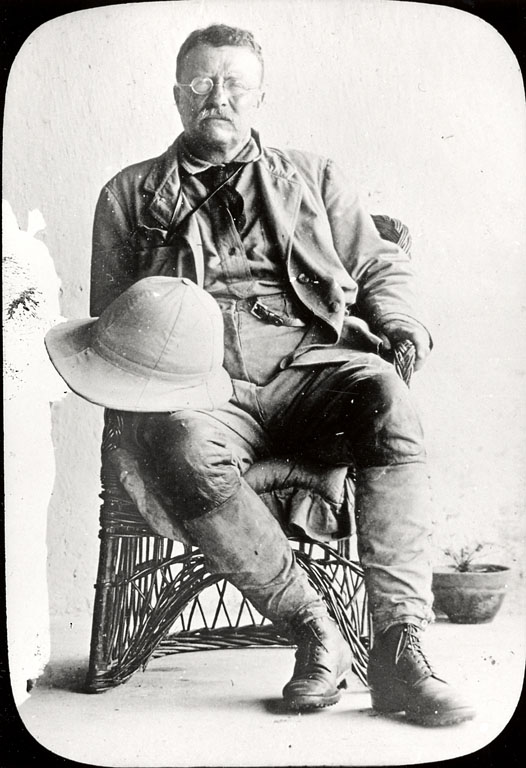 When my grandfather was three years old, Teddy Roosevelt traveled to Yellowstone. He's pictured at left in an archival photograph used here from the collection of the Smithsonian Institution.

I don't have any record of his success in catching trout.

I have local trout. I live in a trout state. I'm still excited about going somewhere else to catch trout.

When I was young, loading up a crew for a couple hot summer weeks chasing trout in Colorado was a real treat. We usually camped and of course my uncle, cousins, and friends were all the sort of outdoorsmen with infinite patience whose every easy action brought success.

These memories of a few happy weeks are precious to me. Somehow, the thought of traveling again for the same sort of uncertain boyhood adventures fills me with joy, even if I too squint at the camera.

If the trout cooperate, that too will make me happy. 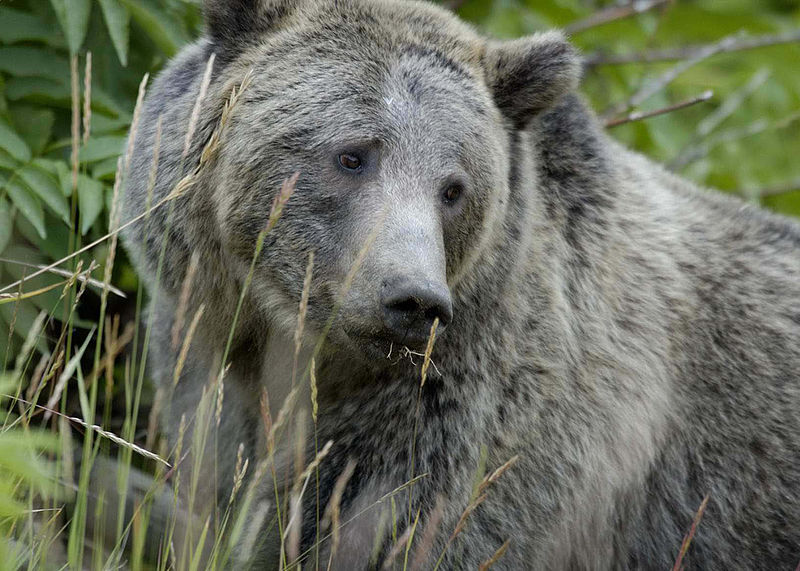 At left, a Grizzly Bear as photographed by the U.S. Fish and Wildlife folks. Terry Tollefsbol in this case. Nice job.

Our crew is going to Yellowstone in the fall and I'm getting up to speed on flies, rivers, terrain, weather, and the works.

As a destination, it's an embarrassment of riches.

I'm also considering eating nothing but bacon sandwiches all week.  It's what this guy would eat if he could ask.

I'm sitting on the bank and watching the water, eating a bacon sandwich on toast, drinking coffee. 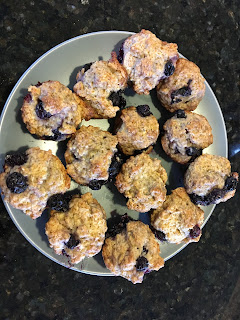 This morning's baked-goods-illustrated segment: mini-muffins. Blueberry, of course. I use too many blueberries.

Muffins are only a blueberry delivery mechanism. Besides, I'm practicing for the Camp of Old Bears in Yellowstone.

It's a trip year. The Amber Angler crew is going to Yellowstone for a Montana outing. Huge trip for us.

I'm going on a fly-in to northern Ontario again in August which is always a blast.

I'm going to Rocky Mountain National mid-summer for some mountain meadow fly fishing. Taking Frau Bear (thus the "meadow" because she isn't going to pack three hours and 2000' of climb to the better alpine lakes). Early morning is the trick to avoid crowds and so, we'll be a dawn patrol along with a couple students under instruction. Pity them.

Hey, soft hackles -- fished wet and dry -- in a mountain stream and at the edges of pocket lakes. Should work fine.

The Dexter Casting Club (not to be confused with the Golden Gate Angling and Casting Club here) is getting off the ground. We're doing a bit of Monday night casting practice and self-paced learning on a local pond.

We'll have sessions on the Huron, too -- after the bitch decides not to drown me. Water is high, fast, and dangerous for wading now. Pretty much like my entire state.

Anyway. Spey work on the river for trout and steelhead practice. Single-hand work on pond for the all-around. Should be good jovial efforts followed by something tasty at the Beer Grotto like the delinquents we anglers are.

Which brings me to these guys: 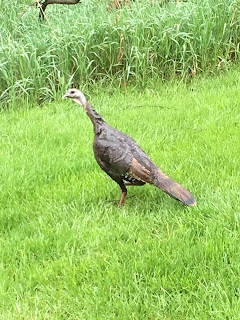 I've a juvenile (delinquent) turkey problem. These skinny little bastards are scraping the new mulch out of my perennial beds,  smoking cigarettes they roll themselves, and occasionally tagging things with silver sharpies. They make a lot of noise at dawn, too.

The good number of these guys hanging around means my growing coyote problem has been addressed.

I get my mileage out of spending money for trips and vacations by anticipation. I stretch the value by using the preparation time for increasing my enjoyment.

I read, study photographs, maps, and satellite images. I read the descriptions and accounts of similar outings. I plan. I scheme. I even dream.

It stretches the dollar.

It's no different than winter tying sessions with a glass of scotch and a fire in the woodstove as I sit with Lou the foxhound in the library, watch the snow, and whip out another half-dozen Royal Wulffs.

I feel the enjoyment of fishing when I am not in the field.

I'm prepping for Yellowstone now because the damn park is huge and opportunities in and around it are enormous. Our group has a great place to stay. I've rented a Subaru to drive around with Leechboy as we hit various spots. Seemed a good choice given a late-fall chance of sleet.

I'm working on the precis brief on the waters of the area -- though none of the Amber Liquid guys will read it. They're impulsive. Makes 'em good companions.

I always feel I need to know the area. They feel that "going" is going to work out. Both ways can work and usually do work out fine.

I shared a book recommendation with The Senator. He too likes to know what he is getting into in order to not miss out on "the good stuff." Stopping at one bend on a river is fine but we both want to know what we're missing around the next bend.

I've set-up my LaTex typesetting software and am producing my briefing in the style of Dr. Tufte (here). It is going well and I'm enjoying the effort at non-fiction.

I've seen a similar layout used for fiction as well (The Selected Works of T.S.Spivet). The novel I reference was sold at auction by the author's agent for an advance of $1M in part because of the book's visual appeal. The marketing department of several publishers all believed that anyone opening the book would likely buy it based on the copious appeal of the side-notes and illustrations.

Literary fiction remains a difficult market despite the occasional gimmick.

So, I'm putting together the precis briefing on Yellowstone. I'm happy.

When the last time a writer said he was happy about something?

It's wet here and I sorted flies in the various versions of "go to field" boxes a couple weeks ago. Anticipation, again.

I sort by size and tone. I've got some color problems in these boxes. There's some size and composition stuff to sort out, too. I don't have my soft-hackle streamers in these pictures.

Basically, after sorting my boxes are still hunt and peck sorts. Meh. I'm not a commercial fisherman. I drink coffee on the water and have time to hunt and peck. It shows.

I do have two new Umpqua waterproof boxes that I'm trying to sort my best utility flies into. I dip my side bag in the water a great deal so I'm using waterproof boxes. Comes with being short-legged and wanting to take one more step. Now that I've tossed the marginally tied efforts into the mason jar, I need to stock the new go-to-river day boxes (one shirt pocket, one side bag -- more than that is just too many flies for prevailing conditions). 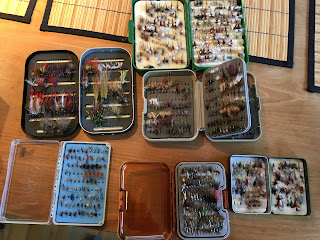 Above, the usual motley assortment of fly boxes accumulated over time. I like my felt fly wallet best but flies do slip out. All of these have done some duty as shirt-pocket boxes one time or another. 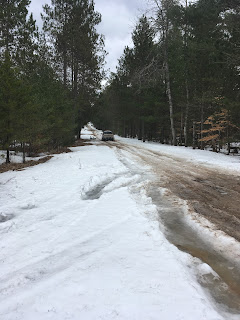 Three pictures of Black River country on Friday.  That's between eleven and thirteen inches on the forest service road a couple miles in towards camp.

The guy down there in a new model F 150 was doing fine ... for about another fifty meters.

The problem wasn't so much the snow but the huge amount of water from the melt and the lubricating effect it had on the sand-bed roads. 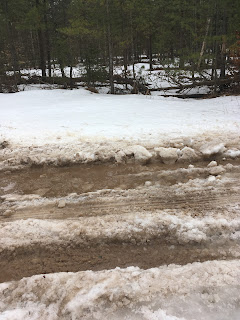 An example. I'm on  "high spot" here and you can see how the snow and ice worked to pool the water. 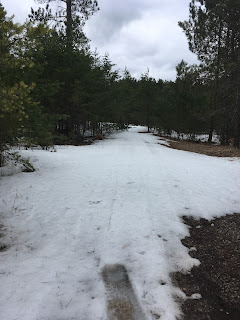 The road to an alternate campsite. I didn't get to my chosen spot.


So, I was making it down the road fine (after helping the lightweight F 150 in the above picture who had a little traction issue on some running water). However, in the advantage of age and experience a little voice spoke up inside my head as I paused to take these snaps before roaring onward ...

At twenty-two degrees on Saturday morning, this water would surely freeze over to sheet ice. That's always unpleasant especially in camp.

Then, It was to warm Saturday night into Sunday morning and there was a great deal of snow to melt. Local road flooding in the forest lanes was highly likely before I eased out at noon on Sunday.

Maybe, I should come back.

Au Sable in the trees.
South Branch unwadable as is usual on opening day.
The Manistee was fast, high, and treacherous.

I suspect the small Deward segment upstream on the Manistee to be high but manageable in spots. The problem being hopping between those spots with the possibility of getting "high banked"  in the flow and unable to crawl out upstream against the narrow channel current.

The Sturgeon was bank-to-bank and isn't a river with paths down the banks.
The Pigeon was better (the camp road above lead to the Pigeon) but again, it is a brushy beast that demands in-the-river wade fishing.

The Black was anticipated to be high but as it is a smaller stream, it would have been manageable were the surrounding conditions better. My desired stretch has a couple miles of bank walking available.

Discretion and Experience had me drive home Friday night.

Those two seldom are available for dates. Normally, they're washing their hair or something and leave me chasing that hot redhead Rashness and her exotic, leggy cousin Ill-considered. Those two account for most of my best stories and more than a couple scars.

I fished my local Mill Creek ( one five-inch skinny brown )  on Saturday afternoon in a bit of wind.

I was the only fisherman out. I caught the little brown on a soft-hackle micro-streamer in root beer on the very first half-cast. Then, nothing in two hours.

It was a good outing.

I was able to use my small OPST 175 grain head and tip set-up on a Winston BIIIx in 4 wt. I was casting from the bank in the weeds and brush with no appreciable backcast. I  covered all the water I wanted. Lovely. Worked like a charm.

Yes, the BIIIx is a wonderful dry fly instrument. It also makes a fine all-rounder here in Michigan, soft tip and all. It's pretty nice plastic.

So, opener. I celebrated at home. Had the place to myself this weekend. 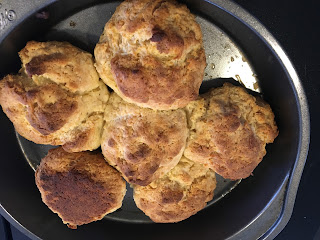 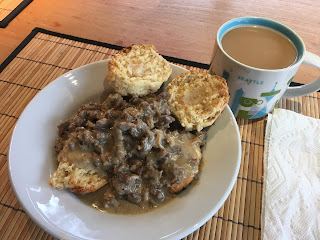 Biscuits converted to biscuits and gravy. Always looks disgusting in pictures but smells so good in person. It's a small bowl.

Okay, not so small a bowl. Lunch, really. 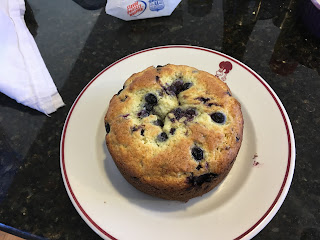 Blueberry enhanced Jiffy-sourced blueberry muffin coffee cake. This beast was indeed destined to Sunday morning at camp but became Sunday, Monday, and Tuesday breakfast treat back at "base camp."


I'll give the up north two weeks. I'll fish the Huron swinging for smallmouth this weekend. Then, excursion outing to the north.

Still, it's opener. I have daffodils blooming and all that snow was four hours north of me,