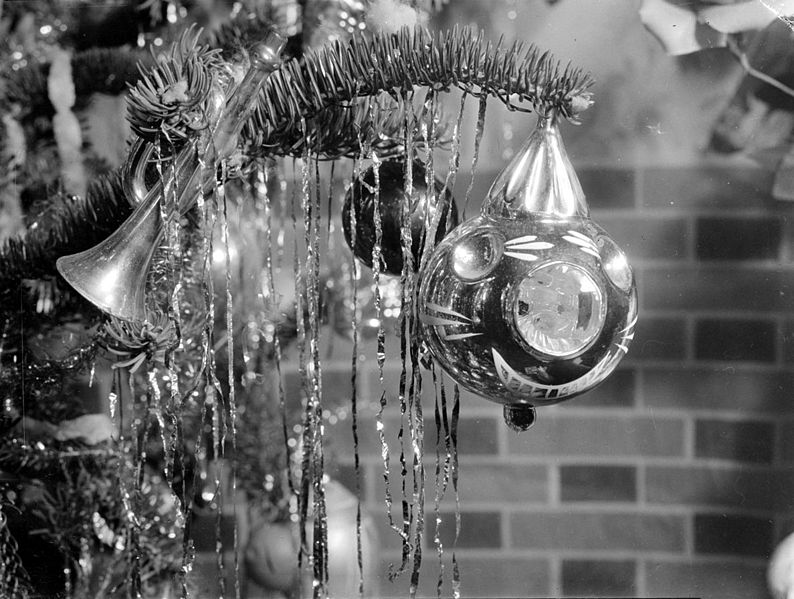 Public domain image from wikicommons at left. Those of you of a certain age will recognize some of these ornaments. My family had the small bugle and a matching French Horn.

We used those bloody icicles, too. Usually, putting them on the tree could be could be counted on to result in a fight. Setting-up the tree was known as "the main event."

The Amber Liquid crew is going to meet for Amber Liquids on Christmas Eve at a local watering hole. I can be assured there will be no fights setting up those rounds!

I'm going to mention here that I bought my wife a synthetic fur for Christmas. [ She won't wear the real kind.] I'd have to work pretty hard to mess-up this holiday; but, I've been known to try.

I've been hiding from my vise.

I intended to tie up a bunch of flies for the Amber Liquid guys as a small Christmas present. I haven't.

I'm in my library now and could be tying but have two serious vocational projects and a pair of avocational writing projects to finish. No tying today. They'll all make due with a pint. It isn't a crew for mush and sentiment, anyway.

I've been trying to give some business this year to my local start-up fly shop. I've done pretty well.

I've spent about five years of fishing budget in the shop upgrading gear all of which was perfectly good to start with and none of which has found a new home despite being relegated to "the pile."  I night have to give some of it away.

"First one is free."

Three rods this year. Yea. Three. By my wife's judgement, they'd all be bargains. They're in the  "Buy Now and Save" class of bargains. Hey, I'm a sucker for pretty varnish. Put it on something blonde and I'll pay twice as much. [ Ba-dump bump. We're here all week, folks. Tell your friends.].

The Christmas Trout has been kind to me this year but it is time to spend nothing on gear and spend more on trips fishing. After all, gear is lovely stuff to fondle and write about; but, time on the water is the joy.

Naturally, my little shop is now a Loop dealer. That stuff is like crack to me.

I wanted to buy a Loop reel when I was in Sweden a few years ago but didn't. I bought a new offshore jacket instead and if you've bought Helly Hansen gear before they became the Scandinavian version of Eddie Bauer you know that the reel would have been the cheaper option.

I'm writing this when I should be either at work or downstream on the Huron fishing for steelhead. I'm hoping the effort will pay off and the Christmas Trout will bring me fair days and cold water in the next year.

I'm buying myself a new Solo stove for Christmas. I'm tired of cold sandwiches and breakfast bars. I want something hot when I'm on a trout dash. I'm getting soft.

Good luck this season. The wading can be treacherous. Hope the Christmas Trout brings you single-malt for the flask.