They're In The Water 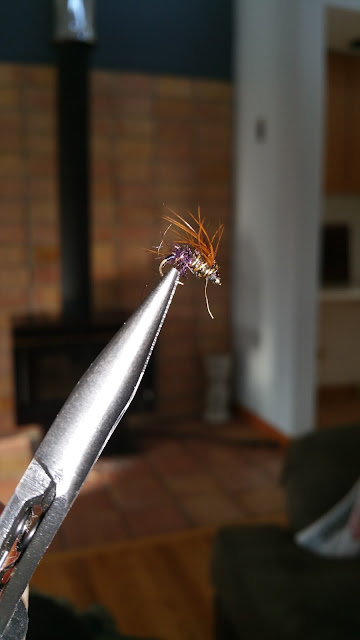 At left, the Bearfly: a black-dubbed gold-ribbed hare's ear in 16 with rusty hen hackle "leg-things". No, I didn't see the stray fiber hanging down until after the photos. It's almost invisible without the flash: a piece of the SLF fiber from Wotton's SLF in black.

Yes, it does have a bit of a fat ass. The black SLF is a little "stiff" and doesn't settle-in like natural.

For whatever reason, the black SLF is slightly obnoxious to work with when compared to the same brand in hare's ear  or the white.

I like the dark color of this fly and will tie them about 2:1  versus standard light grey hare's ear this winter. I just like it.

I'm tired of tying the standard hare. This pattern is easier for me to see to work on when tying without turning my desk lamp to "tanning."

Looks buggy to me.

I'm a dry fly guy. I like fishing the surface and watching the takes.

I don't catch a ton of fish using that technique.

Last year, I started using versions of the North County Spiders as soft-hackled flies I tie myself and ...boom: I started catching more fish.

I started having more fun subsurface, too.

I learned two styles of fly fishing - meaning using a fly rod. I could throw a woolly buggar subsurface or throw bushy flies on the top. I was experimental and cut off the bottom of hackle to make "splatt" flies on the surface film and did well on nutrient-poor high-county streams.

In Ireland, my Uncle tied big hair-wing streamers for me to use for trout. He fished salmon, exclusively. None of his flies survive; but, the smallest would have been a generous 6. No, I didn't catch a lot of trout in that period either but I did become a good flat-water slow-current dry fly stalker.

This was my first introduction to the meaning of presentation.

I'm working again this year on my sub-surface action.

I'm going to use some lighter feather-wing streamers this year. I have high hopes that I'll be able to do better at controlling these lighter angler-driven flies to entice takes better than my unimaginative "swing" of a buggar. I took three nice fish last fall on smallish hair-wings (size 12) with very little weight that I "pulled" or "snap-jigged" through the water. The takes were fun.

I'm at the vise just like everyone else. I'm thinking of spring. I'm revising my "must tie" list for '16.

My walleye buddies with whom I enjoyed years of fly-in fishing to back-county Ontario tell the story of one outfitter who dropped them off at the cabin and turned around after unloading the gear to crawl back into the float plane.

My buddies expected the usual "secret sauce" briefing from the outfitter as is customary in these trips so they asked "where are the fish right now?"

As the outfitter started the engine, he yelled out the window "They're in the water."

Haha. Everyone laughs. The crew never used that outfitter again, however. Service matters.

I have trouble detecting takes sub-surface when I don't have a good view of the leader in the water. It makes my nymphing poor.

I'm going to use some small 6 mm in-line bead indicators I tie-in myself into my nymphing leaders to help with this. I'm not a brave enough wader to keep all my leader off the water when nymphing holes and so I need a crutch. I cannot "tight line" everywhere I want to fish.

I hate "bobber" but I do need the help getting a better feel. A little visual aid may make the difference. I have a Bearfly to prove out so, I have to do better.

I have been adding some beaver dubbing to some versions to create a natural "scum" class that will help when there is distinct surface action - without resorting to true dry fly. I get dry-fly refusal even moving down two sizes and 7x tippet. Last year I discovered the very real difference between "the film" type of emerger presentation and surface dry-fly style presentations.

I fished a pool too long having each fish refuse my drift and fly several times. They kept feeding, though - so I didn't hose it up completely. I switched to a spider with beaver dubbing that hung on the surface.  I took two of the fish before sending the others down.

Scum won out. I was too slow in being a full fledged scum practitioner first. I wasted half a year.

My technique this year : Scum First. I won't jump back to dry when I see the first few hatches pop in the warm of the afternoon. I'll move to film-style soft-hackled flies.

I'm getting better. I hope to make my buddies better, too. More upstream work this year. More water study. Less thrash, more fishing like a heron.

I'm going to eat more smoked clams while watching the water on quiet afternoons. I'm going to see if I can listen for the trout.

Back to the vise.