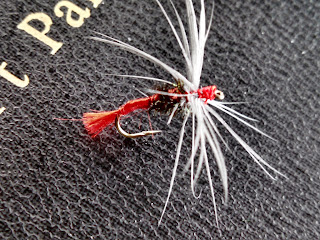 At left, a soft hackle: the coug.

I had good luck with this beast last year in size 14 and 16 where the shank is wrapped with four to six turns of non-lead. It fishes in the bottom 1/3 of the water column and brookies love it. I'll tie it in 10 and 12 this year as I search for the larger fish under the smaller fish I observe on the surface.

The hackle is soft dun hen. The collar is peacock herl. The abdomen and tag are wrapped four-strand floss. Thread is claret in silk, as if that matters.

I do use a dubbing loop twisted in with the herl to make a stronger fly. Like some of you, I've had herl break and flies come apart from rough treatment. I don't think there is any cause for that and if one wraps the dubbing loop in with the herl, even broken herl stays in place rather well.

Note this fly shows a barb. In practice, the fly is fished with the barb smashed down. My local shop doesn't carry barbless hooks but a good pair of needle-nose pliers are never far from my hand.

This little beast is my connection with Dave Hughes, Syl Nemes, Vern Hidy, James Leisenring, George Skues, Mr. T.E. Pritt, W.C. Stewart and Mr. Issac Walton. Not all of these giants would agree with the degree to which I've hackled the fly, the use of weight, and probably the floss.

The fly does however work. The hackle has a nice taper in the water when the fly is pulling in the current and my strikes come upstream on the first half of my drift and downstream half on the swing and half on the dangle (or second dangle).

When I was a kid in fourth or fifth grade, a fishing show was popular in my area of the country: The Sportman's Friend with Harold Ensley. His theme song included the lyrics "gone fishin' instead of just a wishin'" and to a kid, that summed up how I wanted to live life.

I remember Harold fishing for Northern Pike and Muskie. When the big spoon - usually skirted with deer hair - reached the Lund, Harold and his son would make a couple large figure-8's in the water with the lure off the tip and frequently, this action provoked a strike from the large following fish. The fishing was filmed soundlessly in super-8 and the replay on the television was accompanied by voice-over narration by Harold and occasionally his son Dusty.

I use a second "up and back" pull with my rod inspired by those films of Harold when the soft-hackle is on the dangle and about half my dangle strikes come on the falling fly from this "second dangle."

No, I usually don't detect a strike on the dangle until I pull on the line and find a fish hanging about down there. Not trying to hook a fish downstream - and letting him hook himself - turns out to be a pretty good tactic. The fisherman doesn't get to mess things up.

We fish trout, not bass. No raring back with all your might to set the hook, mate.

Now, I'm showing "the coug" and talking about this line of fine fishing writers because I'm trying to improve my skill as an instructor. Catching is more effective at enticing new fly fishers than my romanticized speeches about trout living in the most beautiful parts of the world.  Trout do live in some wonderful places but sight-seeing isn't really the first purpose of the sport.

I ran across a passage this week thanks to Syl Nemes and his The Soft Hackled Fly and Tiny Soft Hackles. The passage is from W.C. Stewart in The Practical Angler:

Those anglers who think trout will take no fly unless it is an exact imitation  of some immense number of flies they are feeding on, must suppose that they know to a shade the color of every fly on the water, and can detect the least deviation of it - an amount of entomological knowledge that would put to shame the angler himself, and a good many naturalists to boot.

It is this sentiment exactly which I have inherited in my fishing from my Uncle who started me down this path by taking the time to coach me on a passable form with a fly rod some forty years ago.

I speak of the uncle who exclusively used a woolly buggar in brown or black and who scoffed at my dry flies as "having fun."  Depression era kids who once fished to feed their brothers and sisters had different ideas of sport than perhaps we do today.

The point of this follows: the coug looks like no known insect. In the water, its light and neutral tones do however look like most insects and moreover, the movement makes the fly look alive.

I'm going to send new fly fishers into the water with flies like the coug on easy down-and-across beats for a simple reason: it works.

We'll cover the joys of a Deer Hair Caddis (DHC) take on the surface right at dusk a little later.

I've been a poor instructor. I'm sorry for that.