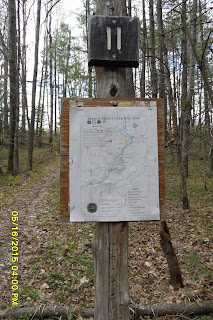 At left are a pair of pictures from a wonderful piece of wilderness: the Mason Tract on the South Branch of the Au Sable.

These are older pictures from a trout-dash a year ago. The Mason Tract Pathway runs along the entire west side of the twelve (fourteen ?) mile stretch of uninhabited public land (exception - six cottages on east bank about halfway through ... legacy places). The top picture shows the posted waypost and map.

The bottom picture shows the South Branch nearer the south end headwaters  in their typical spring condition. Water will be lower now.

Banks are intermittently weedy/marshy rushes, timber and sweepers,  and Michigan fly-eating brush. The bottom is firm and alternates between cobble, gravel and a little sand/muck (especially near the swampy southern end). 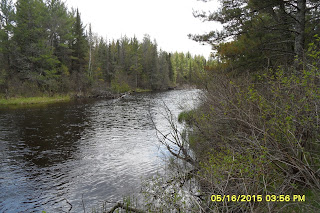 The Amber Liquid guys are all ready for a great fall outing. We'll have a little rain before we set-up camp then a little cooling and some nice fall weather. We've got Old Del as a base (24 foot Airstream trailer) and a Vizsla pup for entertainment.

The early fall has a nice BWO hatch, a strong ant/beetle bite, and good micro-streamer action.

I'm anxious to get the guys on this section. They enjoyed the Deward Tract earlier this year though there was some brook trout grumbling about "little fish."

My answer? Buy a three weight! [ the Senator did and he got a nice one].

Anyway, the Mason Tract is the same sort of remarkably undeveloped protected wilderness with ... brown trout. Large browns, actually.  If I can put the Amber Liquid guys on just one, I'll have them hooked on trout camping this great stretch. Time ont he water is what they need. The fish are here. The bite is here. Time, gentlemen. Time.

Below - official breakfast of Amber Liquid Anglers. Yes, thin mints. They're made with real girl scouts. 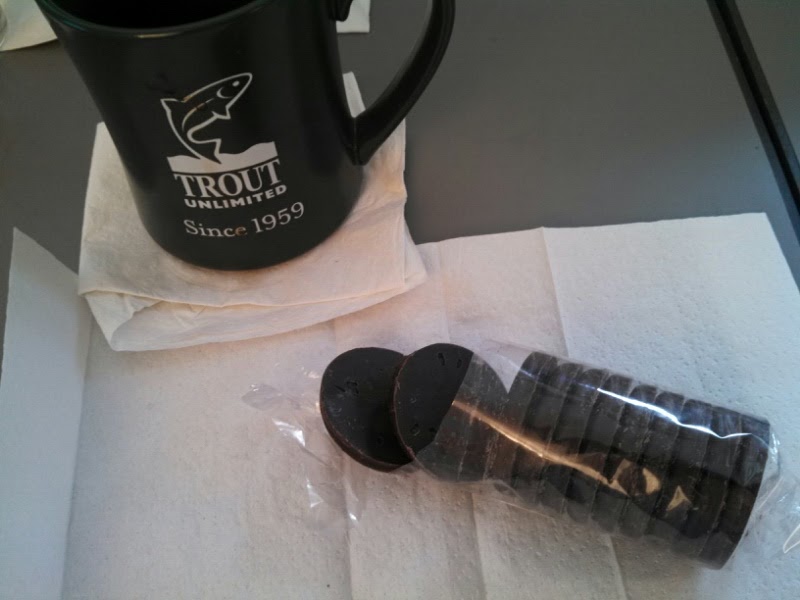 I need to post the photo recon of the Jordan River yet. Might be a winter project. I know I'll be fishing the Jordan in July and August next year.

Oh, refilled both flasks just in case of rain. Yes - drank one of Bushmills and one of Glenfiddich while waiting out the Jordan downpour. That's a lot of whiskey; but, it was a lot of rain.