Above, The Jordan River Valley in the Northern Lower Peninsula of Michigan from the trail that runs through its namesake. Somewhere down under the distant trees lies the cold clear water of the Jordan.

I'm taken with this water. Smitten.

Now, my first outing was a sodden mess. The campsite is a pack-in of about a third of a mile up a serious hill from a makeshift wide-spot-in-the-road parking lot. The road which runs along the Jordan itself is a one-lane affair upon which I was fortunate to have to myself as I'm still driving my roadster.

The water though is clear and cold and isolated. I've found my mid-summer retreat for the dog days of July and August. My hand could stay in the water for a count of forty before my fingers would hurt.

The trip was on weekend of 10 September. The water is cold.

I'm fortunate that The Senator has a family place in a wonderful "up north" resort town quite near the Jordan. He was gracious enough to scout this area for me a couple weeks before my trout dash and without his appraisal of the terrain, I might not have made the trip. I owe him for this little bit of heaven.

I'll run through the trip report here with some pictures. 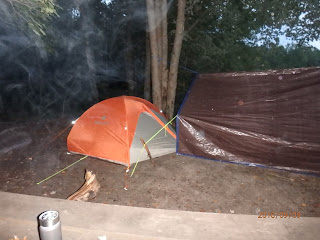 Campsite here and below. The location is a great reverse-slope defensive posture nestled in the trees for less wind. The bugs will be fierce in July. On my trip? No bugs. 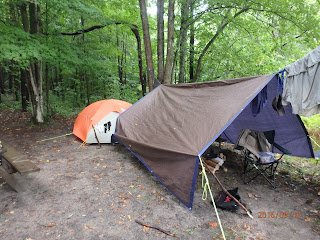 Campsite on day two as I try to dry ... well, everything. I rigged the tarp on the first night before pitching the tent as rain threatened. The rain held off for sixteen hours until I was two-and-a-half hours north on the trail.

Then, it rained like a cow pissing on a flat rock for four hours straight. You know how much warning you have that it is going to pour on you when deep into a forest trail? That's right. Thirty seconds. 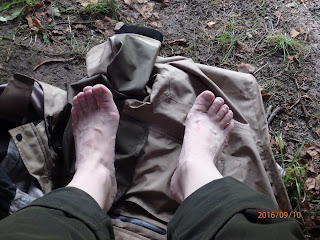 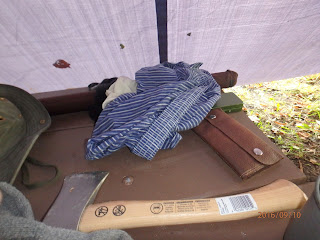 Commando dries faster so off with the base layer. 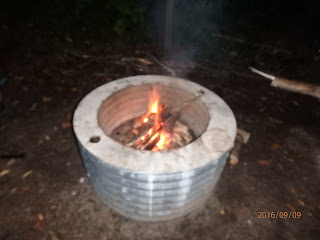 The fire rings are super-sturdy and set up as heat banks for cold-weather camping. This was the first night's comfort burn as I smoked a pipe and read a little Kipling. I like poetry in the wilds. I'm partial to Sandburg, Hughes, Frost, Collins, and Kipling; but, Vachel Lindsay isn't beyond the pale.

It is an accepted fact that trout themselves are among the most literate of fish. One does well to keep this in mind when pursuing them. 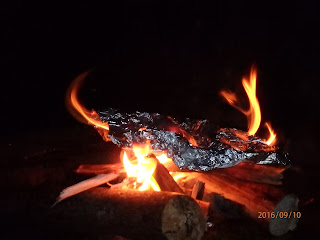 Mountain Leader trick: fire starting in the rain. Don't use much of that handbook in most of my day-to-day world. I do always have a tinder patch wrapped in foil in my pocket when I'm away from the gentry. 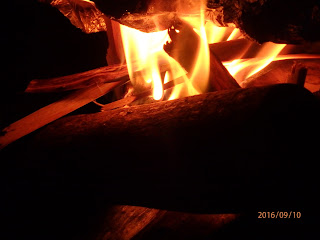 Works, though. Top-down broiler to dry the wood below as it works its way down. This is fire in a steady drizzle which subsequently burned strongly through two downpours. 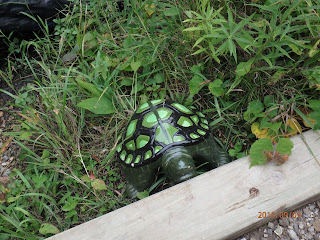 Not everyone was bothered by the rain. This ornamental turtle is along the north side of the trail leading to the campsite. I've not seen other yard-art in Michigan trout areas. Cute, though. 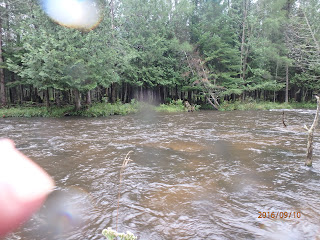 The river -- up from the downpour. I was able to fish here in the lee of a grass islet. I was also able to snap an intruding finger in this shot. The water has a cast to it in this picture but in reality, it was a  very mild stain. I could still see down four feet to the bottom even in this spate. 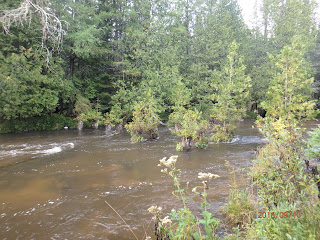 An old bridge crossed here back in the day and the footings are still present. Brookies dashed in the current here. 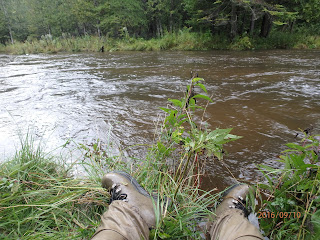 Just downstream from the footings about thirty meters. The flow had two natural seams and out of the closer one, I could manage a little contact nymphing where I got one nice brookie before knocking him clear with my clumsy - and excited - net work.

I had a field supper here before returning to camp for round two of the downpour. 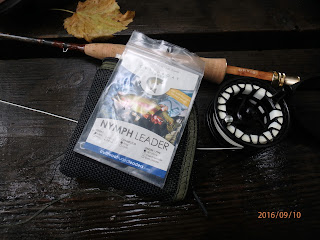 Plug for good gear: I've been using these furled leaders from Cutthroat Leaders the last two seasons and really like them. I like to tie my own leaders and am pretty particular about taper performance and turn-over. These Cutthroat leaders are memory-free, soft on the drift, and handle my soft-hackles quite well. They're not for heavy two-fly dropper rigs. This is a nymph leader I tried out. A little gimmicky. Meh. 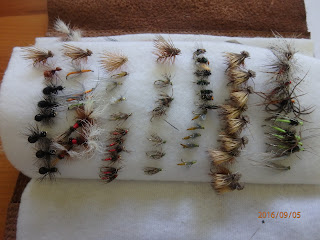 
These are all mine in a fly wallet Chris Lantzy made for me. His link is over on the right and Chris is an consummate craftsman. Great gear. Classic stuff. 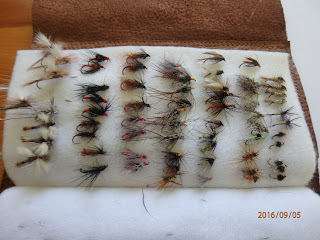 More flies. The flies in the two plates here are all mine but for the parachute models on the top row. A guide buddy tied those. Notice they look "shop fresh" while my flies all have a "crushed bug" sort of appeal. I'm after fish, not fishermen.

Sorry Steve, my ants are the middle-of-the-thorax sort of hackles things. 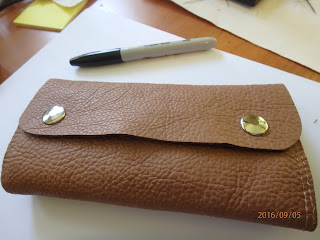 This is the exterior of the fly wallet above. Great in the shirt-pocket. Holds too many and of course, that's the number of flies we want on the water: too many. I couldn't tell precisely what I'd need on the Jordan so I went heavy.

I've a history of going heavy when the opposition is unknown.


I'm planning 2017 now. The Driftless looks like a good bet for a soft-hackle sort of fellow. I'm not likely to make it to the Test next year so, probably a road trip to Wisconsin is in order.

I'm flying on a float plane into the far wilds of Ontario with some serious murderers in the middle of summer. I've already started my toughening for that trip. No place for a turned ankle or a back that "goes out."

I do need to practice my "fillet 'em with an ax" parlor trick.

I need to sharpen my ax.