You, Flies, and Trout 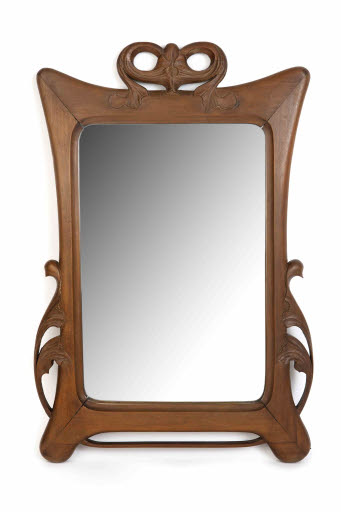 At left, an Art Nouveau style mirror from the collection hosted in the Museu Abello. Public domain image from wikicommons.

I have to tell a story a couple of times in order to get it right. There are some things I want to say about trout and anglers. I need to say them a couple times to shape the presentation. It's a habit.

I'm going to say them once here and later, I'll do a better job. Indulge me.

The mirror at left. It's a surprisingly enlightening device when we consider angling.

I'll get to the mirror's use in a minute.

The occasional angler deserves the occasional trout. This angler has mastered their game to the point of reliable competence.

It shouldn't be a matter of chance or circumstance to end a day with a trout on the line. The occasional angler should be competent to reliably catch the occasional trout.

That's the fish we're after: the occasional trout. For the purposes here let's consider him a nice fat 12" brown.

I struggle to be the occasional angler.

Too often, we recreational anglers wear the clothes of another type of angler: the infrequent angler.

Everyone has commitments and to say the trout angling ranks first or second on the recreational priority list isn't realistic. Both the infrequent and the occasional angler visit the stream a dozen or fewer times a year. They might even ride to the stream together on most outings.

Our difference in distinction between the two isn't in the number of trips a year made to the trout stream.

The infrequent angler is the fine individual whose encounter with trout is by happenstance or chance.

Catching? "No luck today," is the response. Infrequently they are able to answer "caught a nice brown."

Everything about fishing for trout with a fly rod is under the angler's control. We're not playing bingo here where the spin of a cage determines success or failure. Catching fish or not catching fish regularly works out to a single common factor: us. We see it in the mornings in the mirror as we apply our eye-liner. (beard-oil? Mobes?).

We infrequent anglers execute the act of deceiving a trout -- even the act of locating where in the water a trout might be -- poorly. Alternately, we grow roots. As the drunk looking for his car keys under the street light, we fish "over here" because the casting is easy and we move very little limiting our exposure to trout and undisturbed water.

If we cover sufficient water and we know the most likely location of trout in the current flow and we present that population of trout with our flies in a pattern best imitating living insects then we should occasionally find a willing taker.

We don't experience success because our efforts are deficient in the three key areas: (1) covering water of opportunity; (2) determining in that water the most likely holding habitat of feeding trout; and (3) presenting our fly as a living insect which the trout believes is food.

We'll ignore the problem of wading like drunken bears for now. I know you do it. I've done it. It doesn't help.

How then to improve?

The trout. Consider the trout. After all, he's an expert on being a trout. A little knowledge here can go a very long way.

The late Datus Proper deposited much of the knowledge any occasional angler could ever need in his volume:  What the Trout Said. It's an excellent work on the perspectives we occasional anglers require for improvement.

Our anglers' assumptions about the trout are most frequently wrong.

Humans love to anthropomorphize our prey and anglers are no different.

Trout are not possessed of human sensibilities, reason, or rational processes. Why? Their brains lack the requisite sections! The morphology is incorrect.

If you could listen to a trout's thoughts (I own the only working example of the trout-o-think-o-meter) as I can, you'd know a trout brain has a recording that plays over and over for eleven months nineteen days a year. That recording has two phrases:

The other eleven days of the year the recording plays "make little trout."


The trout has unusual perception. It isn't analogous to the perception of human anglers because of the wide gulf between the evolution of the two species and the habitat in which the two live.

Water is not air. We'll come back to that.

The angler's brain has a substantial section devoted to passing short-term memories into long-term recall. The angler has emotional processing and highly developed reasoning function (usually). Not so the trout.

Most of the trout's brain is involved in processing sensory input and the predominant part of that section: visual processing.

Pattern recognition. Even here we have to qualify a trout's response to stimuli because it just isn't what you the angler have as personal reference.

A trout does not have a flashcard recall engine specialized in entomology or invertebrate zoology.

He inspects items for signs of any clear differentiation between food and not food with a bias towards size and movement.

I'm a presentationist. I believe the behavior of a fly in or on the water is the critical determinant of its success and therefore my success.

I know representationists: folks who believe that a fly must closely resemble the food present on the stream to best catch trout.

No successful representationist catches the occasional trout without mastering presentation.

Many anglers fishing "the wrong bug" have consistent success because of their presentation acumen. Sure, the "right bug" helps. It isn't the first requirement however.

How do I know?

It makes no sense that the fish would ever take a fly with that bloody big hook sticking out of it if he was pattern selective. There. I've said it.

If the trout can see the insect and discern my Adams is not sufficiently like a Hendrickson mayfly, he's certainly able to discern anything else we fly anglers put on the water has a bloody great hook sticking out of it.

What? The trout just ignored the hook today but next summer will be concerned with the number of legs on my Iso nymph? Bullshit.

More time on presentation for me. More time mastering the process of delivering my imitations so that they behave as living insects and thus: food.

Less time stocking the fly box. I might have to do a season with just four flies. I'll think about that this week.

I could also use another pass through Dave Hughes' excellent Reading Trout Water.  I've some others but that's the one I recommend. Comprehensive text. Excellent.

My barrier to the occasional trout looks back at me every morning as I shave. There it is.

What's keeping you from the occasional trout? Lucky boxer shorts?