At left, my Michigan trout fishing bible since coming to the state; Twelve Classic Trout Streams in Michigan by Gerth Hendrickson and Jim DuFrense.

This past weekend I finished fishing these twelve streams by wading the Pigeon and the Sturgeon.

This is a photo heavy post in part because I could find little to help me plan my outing but for the Twelve Streams book. I want to make some of it easier for the rest of you. 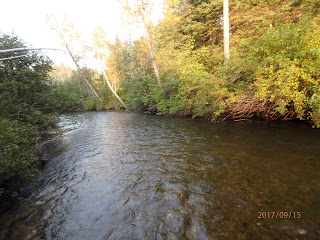 This is the Pigeon at the Pigeon River State Forest Campground. There isn't a "flies only" sort of area around here -- at least one enforced. So, spin fishermen with Mepps spinners compete with streamers for aggressive fish. Several guest told me of "keepers" they'd landed. 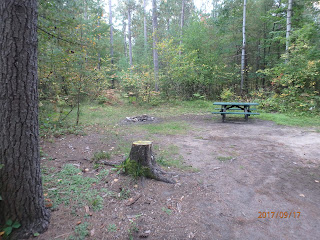 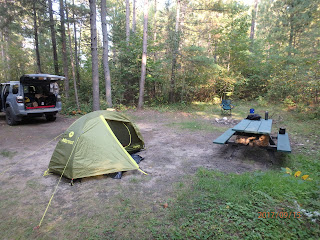 My camp. I went light but was comfortable. 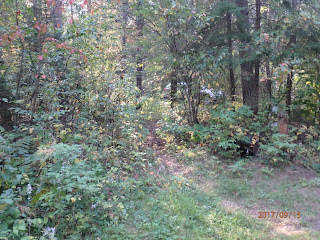 View to the neighbor campsite: pretty obscured. Except for the drunk guy trying to induce coyote howling for a couple hours after dark on Saturday, the campground was quiet despite the many many towed rigs.

There is running water here. The DNR has developed an artesian spring about 20 yards from campsite 15. Very nice facilities. 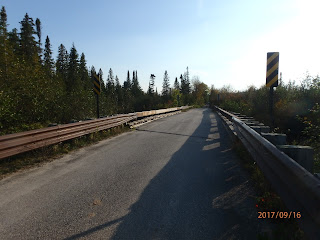 A road bridge over the Pigeon some miles from the campsite. This spot is "Tin Bridge" and takes a bit to find. You want to approach the stream from the west. 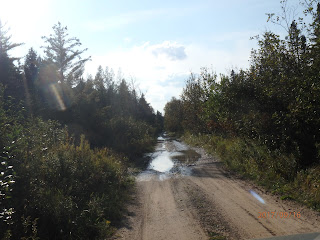 This is Tin Bridge Road from east of the bridge. I suspect a beaver in the lowlands has altered stream flow but that is running water in the roadbed and no, I didn't know if there was a culvert washout down there so I passed even with the heavy off-road gear I drive. An axle in a culvert at dusk is a pain in the ass.

I thought I'd pass on the experience, this time. 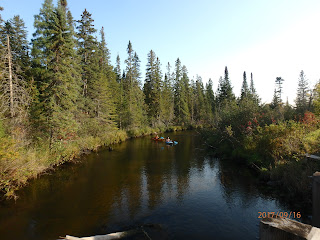 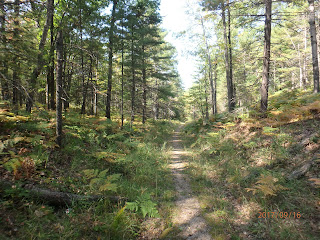 I saw a lot of this over the weekend. Pigeon River country is wonderful but remote. There's a fair bit of hiking to do. This was a typical trail. 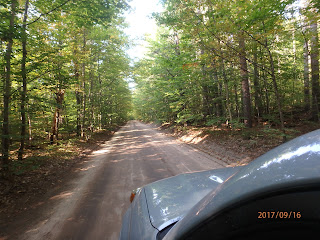 This is a typical Pigeon Forest road. There is a lot of this too and at night, it helps to have a good map. The landmarks are few. 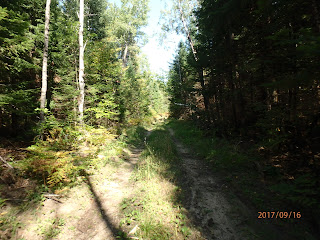 The highlight of the trip was a pack into Green Timbers to fish the Sturgeon as my last of the Twelve Streams.

Green Timbers was originally a private park for the McLouth Steel company employees. In 1982, the State of Michigan took over the area and has largely left it alone.

Green Timbers is a great bit of wild Michigan. The Fontinalis Club -- and no, the club won't let you in -- is the neighboring property. That's the industrialist club founded at the turn of the century whose membership includes Fords (yep, those Fords as in your Ford truck) and others so exclusive you don't get to know they're members. Green Timbers is however public land and shares some of the same water. Go figure.

All you have to do is hike. Figure a little more than five miles round trip. 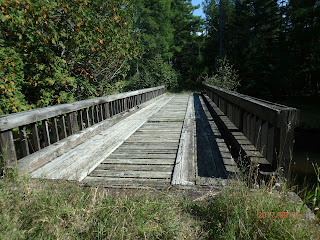 After two miles but before three, you come to the McLouth bridge. Remember, this was a steel company. 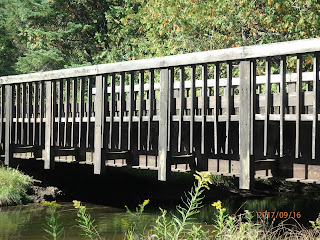 That's a fourteen inch beam. Helluva bridge for no traffic at all. You don't see that sort of thing every day.

The trail to the bridge -- once a road -- is s overgrown that 16" spruce trees in the roadway demand your careful foot placement on the hike in. 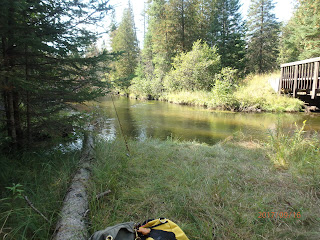 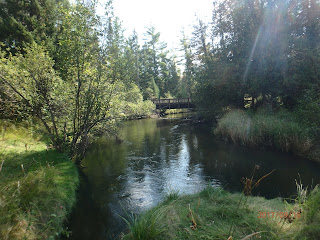 From downstream looking up.

A pair of sand traps -- steel, of course -- are in the water above and below the bridge bend. Fish from the banks. I caught .... brookies. The largest ... six inches. No browns. 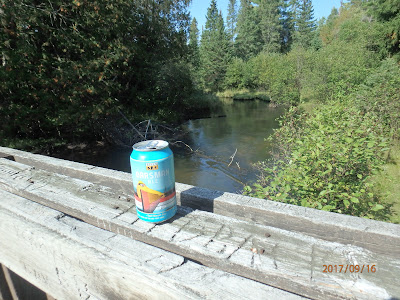 My "Twelve Streams" tribute shot. Oarsman: the official beer of guys packing in on a warm afternoon to complete the Michigan lower peninsula 12 river sweep. 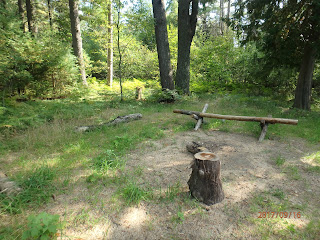 Wild camping is allowed in Green Timbers and some folks have done a nice job of keeping some areas all policed-up for use. No trash. Trimmed underbrush and grass. Nice. 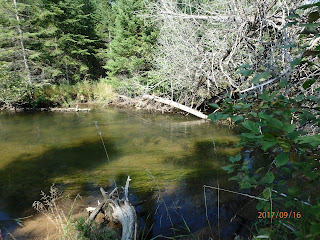 The Sturgeon is rough. I'd say it is practically unfishable. The cover and blow-down is worse than the Jordan river. The whole thing has a snag-pool-snag type of run to it alternating in ten meter sections. Sure, I'd bet there were some great fish in some of the holes.

I couldn't fight my way to them (no trail, no wade approach).

There is easily 10000 man-hours of heavy work to trim sweepers and cut trail though the public land I saw. 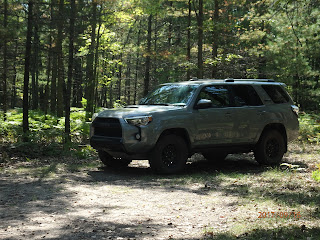 Pigeon Forest country can be tough. Forest trails after logging require something better than a Subaru or Mom's grocery-getting SUV. I fought axle-deep sand and water on several occasions.

I wouldn't have been able to get to several spots without the new super trout car. It's a 4Runner TRD PRO and it needs all of that suspension travel. Seasonal roads can be a bit rough at speed.

There are still publicly accessible waters that don't require such efforts but where the water is easy to reach ....

The Pigeon River is nice and seems to be coming back from the yoga-dam failures of Song-of-the-Morning Ranch ( a yoga retreat that twice decimated the Pigeon ... the dam is now out thanks to litigation, the DNR, Trout Unlimited, and a few other conservation bodies. Thanks, all). I fished cobble and gravel exclusively and saw some great breeding habitat for trout while standing in cold water.

The Sturgeon is a slog. It runs through some awesome country and probably holds some huge trout. You'll earn them, though. It's good hike-and-fish training.

Next year: I complete the Michigan grand-slam: the Fox and the Two Hearted.

I'd say Papa Hemingway would be proud; but, he wouldn't.

There is a price of admission for accomplishment and it is usually paid in sweat through singular effort.

I'll see you in the woods.