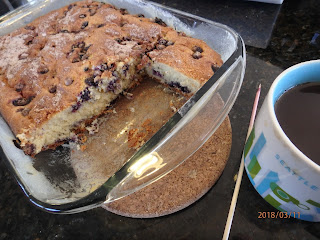 First, the baked goods illustrated segment. At left, blueberry bear bait. It works. Attracted a couple bears in this house.

This weekend was the big Michigan fly fishing expo here in the southeast part of the state. I couldn't bring myself to go.

First, I've got all the gear I need with the exception of new larger wading boots. I bought new waders last year and the booties are larger and thus the existing boots are now painfully small.

I go to these large shows and see a few people I know. Generally,  the room is a giant cocktail party filled with strangers and ... the bar is closed.  Not much there to energize me.

I'm not much on the crowd. It's why I like fly fishing: mostly I'm alone.

I like the company of my dog. Lou's here on the ottoman at my feet as I write this. Beargirl is out on the town.  I'm content. The house is quiet.

I could have purchased new boots through my local -- they went to the show -- who were using the district rep's stock to sell while they were in their booth. Instead, I'll stop by some Thursday on a late lunch and buy the same boots when the store is empty.

One of the Amber Liquid guys had to put down his dog this week. I'm so sorry for him.

There are few people I know who I like as well as the dogs. Dogs are just ... dogs. Every morning Lou is glad to see me. When I get a leash, he's glad to go for a walk even if he isn't the one who needs it the most. He's happy when I come home. He's happy to be a "lap foxhound" and just get petted for no good reason.

I think there's something there about the trout, too. I've no good reason to go into the woods and fish for trout. I don't eat them. I could walk the trails instead of fish. I connect fly fishing with happy times in my life being outdoors and in the elements. I connect with dogs for much the same reason.

I spend most days in an office with faces looking at me to "make it all work." I do the pro from Dover routine a good bit.

I'd make a better trout than dog next time around.

I'd swim with the great beaver. I'm only going to eat worms, though. No flies.

If I'm going to get caught, I'd rather it be on some five year-old's Snoopy rod and bobber. Pretty good way to go.