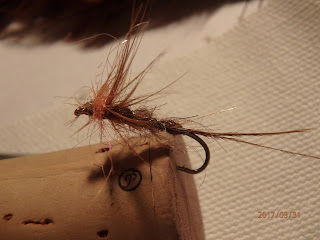 One of the local fellows who follows my ramblings asked me "didn't you have another Hendrickson pattern last year?"

At left, last year's variant tied on a 3x long size 14 ,,, I think in extra heavy. I used up the packet of Umpqua hooks but this looks like that beast.

Still foam lashed under the body. Still transition from last (tail) to dark(thorax) but the collar is a pink ice dub. I was going to the Driftless and there they have the worship of the Pink Squirrel so I tied some "pink hennies."

The campsite versions of the "floater" all have dark collar and they did fine last year so I've skipped the nod to the local favorites in Wisconsin. No, I saw no Hendrickson's when I was there in early May. I saw some BWO  and few of those. Wasn't really a "hatch" going on. Rain. There was a lot of rain and milkshake colored water. 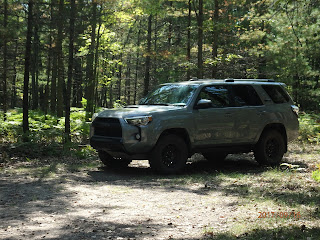 The most important weapon in our arsenal is the one we use to get to the stream.

My old car let me get to the stream quickly: BMW Z4 with all the performance add-ons. Lovely convertible hardtop. A bit tight on space.

So, in the fall of 2016 I ordered a new trout car pictured here at left: Toyota 4Runner in the TRD PRO configuration (2017 special color: cement).

I cannot endorse this vehicle enough. All variants will take you where you probably wouldn't walk.  They're capable, tough, comfortable, and roomy.

The Z4 was to go fast with the top down and the stereo up because Beargirl likes that.

The TRD suspension in this model is super soft. It's built for Baja desert-type trails which also turns out to work just fine on Forest Service unimproved trails here in Michigan. I've only bottomed out the travel once and only when I put it through a ditch this winter and blew up and out onto the road by taking a culvert crossing at about 15 mph. She didn't complain ... just hopped back on the road and kept going.

Kept me from hitting a postal van that slid into my path. I figured I could do better in the ditch than he could in the hospital. He was fine but for spilling his truckster into the same ditch after I dashed by. We could just manually push the little boxy thing back onto the road. We shook and I drove on...

I camp for trout. I might have been able to do fine with  Subaru but I wanted to go into Ontario as well and those seasonal roads are something else entirely. Heavy duty and chainsaw required.

The 4Runner holds everything for a week with room to spare. It goes everywhere. Runs like a champ. I get out after eight hours of driving and feel fine.

It's a step up. I'm a normal sized joe and I have to do a little "hop" to get behind the wheel.

Here are some camping shots. 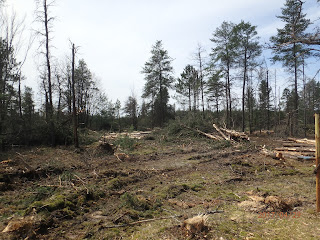 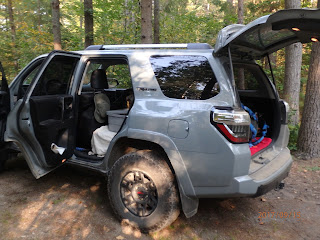 Note the upward lifting tailgate. It's a great feature in the rain. Also, the hatch window lowers which almost no others do today. 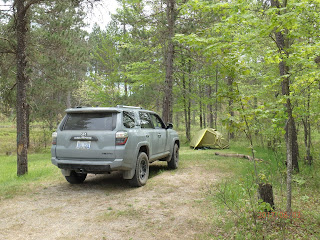 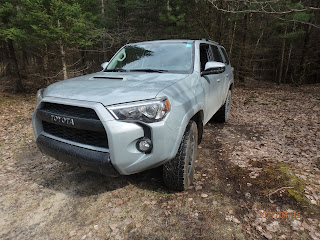 Good looker with the snout. Comes with a skid plate, standard. Yes, the skid plates work. I did say logging road, right?


There are lots of vehicles that work. When I was looking, 300K from both the Subaru crowd and Toyota 4Runner crowd was normal. I picked the bigger vehicle and enjoy it.

There you go. Hauls coolers fine, too.