Blanked on the Au Sable 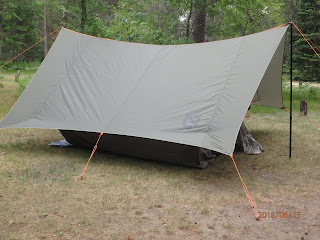 I made camp on the Holy Waters of the Au Sable. I used the "big tent" which was awesome! Worked great and had its rain break-in. Fine. No issues.

I took my time to ensure a good pitch. Very little "fiddling about" required. 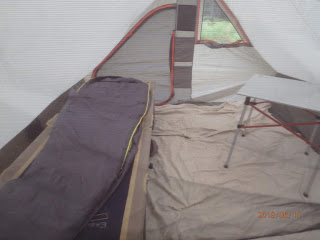 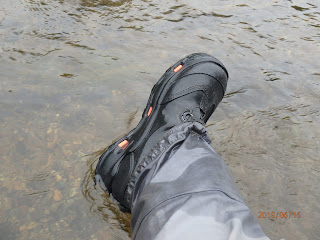 I broke-in some new boots. Loved 'em. Did a quick two mile hike round-trip in them on the South Branch Au Sable moving from one spot to another and back. Very nice. They'll do.

Korkers. I loved my old centurions but with the large booties on my waders, my toes would ache then go numb. I had to get a bigger toe box. 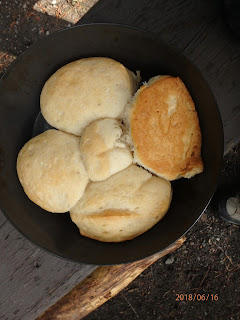 Made some biscuits in the Banks Fry-Bake. These are sourdough-style and I'm not much for keeping a starter alive and not much for cake-style biscuits. I'm more a southern-style fellow. These were a little wet when I mixed them up and so they "caked-out" on me. Cooked-up fine.

I'm just glad they came out AOK in the end. I was sleepwalking through the prep thinking of something else and added about twice the amount of canned milk I intended. 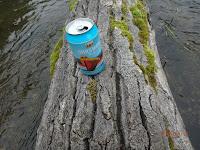 I had a couple Oarsmen while enjoying the river. Let's just say I had a lot of time to think about tactics, fly selection, conditions, and possible valid approaches to likely holding spots.

Lots of time. I wasn't pressured by the haste of catching at all. 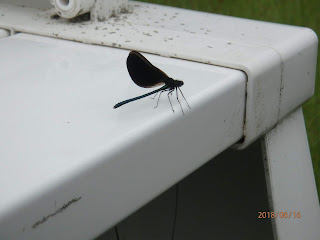 Jeweled damselflies were about on the North Branch. It was a lovely humid afternoon and these were dipping at the water's edge. Trout had no interest in them. 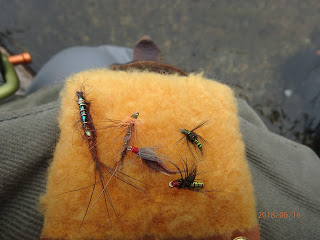 The rogue's gallery. An isonychia nymph. Hare's ear. Partridge and X, Wire-wrapped this and that.

By the end, I had nineteen of these on my drying patch.

I had a pair of small brookies hook-up on size 17 pheasant-and-orange. Neither made it to hand.

I hooked a small brown on the dangle on a PTN in 15 who hopped twice and threw the hook as they can easily do when taken from directly above.  I had a nice view of his belly.

Nothing to hand. I'm not sure why. It rained Friday night in two different spells before and after sunset though neither enough to do much more than damp the firewood at the neighboring campsite.

It was a dad-and-lad family outing over there of the once-every-other-year civilian camping style. Six or seven boys and a couple dads. Fire trouble. Food trouble. The usual misadventures.

I think they all had a blast. Their Sunday morning departure was loud and boisterously happy. Always a good sign with teenagers when they kick-in to do something with gusto. Results aren't always the end game. Activity and the pursuit of some activity count for a great deal.

Gear left out is going to be wet. Provisioning for the cooking fire is the first job after setting-up the shelter and some of that fuel needs to be protected from the elements.

Camp chairs are buckets if you leave them sitting around.

Hey, it's easy when you know how. If there isn't anyone to show you -- or you've only ever "scout camped" -- then you learn by experience. A good attitude helps and these folks could have been the mascots for good attitudes. Also, the boys were learning to fly fish and that was fun to hear.  Knot tying and practice was a big topic of discussion at the usual teenage boy volume.

Sometimes less than optimal outings are learning experiences of the first-order.

My time on the river this weekend fell squarely into "learning experience."

I'm not sure if my approach was insufficiently stealthy, my tag of tippet extender on a cutthroat furled leader was poorly chosen, or my persistence into the evening hours was too brief.  I was off the water by eleven each night.

I fished upstream. I fished an up-and-across swing. I fished an across-and-down swing. I made dry fly casts to holding lies with an Adams, a royal coachmen, a drab jingler, and a jingler with a bit of flashy UV dub in the abdomen. I made nymphing runs. I ticked bottom with wet flies on a swing. I fished the top column with traditional soft-hackles.

I missed something. I know it wasn't fly selection because I covered the litany of bugs in various stage that are present in June. I used old favorites. I used other stages of old favorites.

I suspect that I needed to be on the water after midnight.

The hex started last week. Then stopped. The drakes blew through in the period of one week. It's odd for June right now.

I know Au Sable trout are nocturnal. I did not fish after midnight.

They got me. Again.

Great outing. Can't wait to dash again. Will be July with the current schedule.

Rocky Mountain National is around the corner, though.