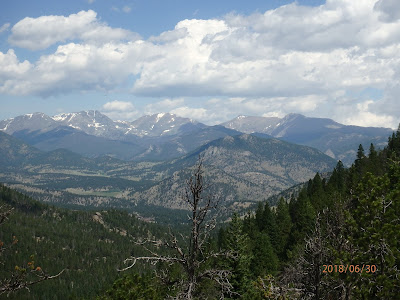 At left, snow on some of the peaks in Rocky Mountain National Park.

Colorado this year is quite dry. A fire on the other side of the continental divide drifted smoke into the Estes Park valley though it made for a fantastic sunset.

We saw a moose at dusk but were unable to get pictures. Typical of moose.  They're uncommonly shy compared to elk, otters, mule deer, or even bighorn sheep.

I did a little introductory instruction while visiting friends.  I outfitted them with the basics but for rod and reel and pointed them to Kirk's Fly Shop  for a few outings on $10/day rental gear before committing to something else.

Dan's an avid hiker who believes he will enjoy the occasional mountain stream or high altitude pocket lake diversion of a few casts.  Janene is a active sort up for anything. Together, they'll have a blast. They took to the instruction right off and were able to master the rod loading with a Belgian cast quite easily by the session's end.

I have cast the Douglas Upstream 380-6 and think it is a fine hiking rod provided the wind is down. That's the deal with the 3 wt: doesn't like much wind. A mid-day outing on a hike needs something with more authority after the ten o'clock blow comes on ...

Below, an introductory set of late-summer flies in both a shirt-pocket day box and a back-up storage box just to get them started.

I didn't tie the big rubber-legged stuff. The rest are mine. 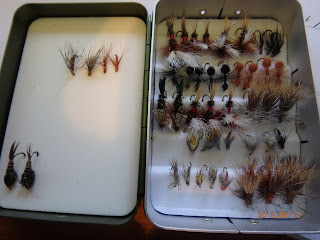 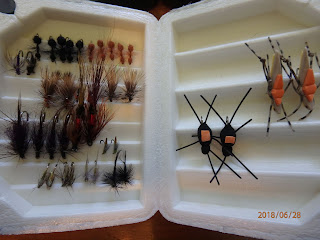 It's a start.  Dawn and dusk ants have always been late-summer flies which work well for me in the park. I like the mid-thorax tie though i understand why others might not.

I tie my ant bodies with floss, varnish the second-to-last wrap, and glue the last wraps in place by wrapping over the wet varnish -- in this case Sally Hansen Hard-as-Nails.

A little piece of 80-grit wet-dry roughs the floss and takes the sheen right off. One or two passes seems to make it "fuzzy" and dull.

I'm about out of the "cinnamon" floss. I'm going to have to look and see if I can find more.

My royal trudes are a little off-center but seem to do fine, anyway.

Apart from instruction, the social schedule allowed for no fishing. I traveled with my wife.

Bear Lake at 9400' prompted a little "carping" for air when we made a brief walk around the water. I'm not ready for serious backcountry at altitude, yet. Three mile trots on the flat lowlands are not sufficient preparation.

I'm going to have to work harder.