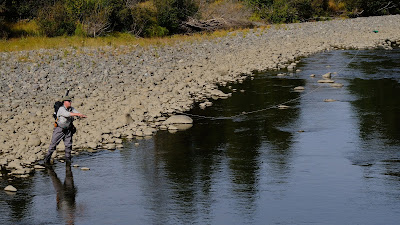 At left, fishing a slot channel in the Lamar for spooky cutthroat. Yes, I'm a long way back from the channel and I'm throwing fifteen feet of leader and tippet with a Hardy Zenith in 5 wt.

That's what it took.

I used a Winston BIIIx in 4wt for more moderate casting (though the Winston will throw almost a full fly line if the wind is down). I used a Winston BIIIPlus saltwater edition 6wt for streamers and heavy tandem rigs (and soft hackle tandems down to size 18).

I used a Orvis TroutBum (Superfine, now?) in 3 wt for brookies on the upper Gardner.

We made the excursion to the waters of Yellowstone Park in the third week of September : transition time.

The country was amazing. The waters were everything they should be. The trout were late-season weary of constant pursuit.

The big browns were not yet pushing up in pre-spawn glory. The undercut banks of the Madison were filled with trout. I walked along a five yard stretch kicking fish out of their holes to convince myself the river actually held fish.

The Gibbon was a gem bright and pure in the stretch above Madison Junction. The Yellowstone was well-mannered but giant strong and so prompted bank fishing. The Lamar was low and slow and occupied by fish not enamored with my presentations or my flies.

The Gallatin runs along the valley road of death. We counted 50+ white crosses coming south from Bozeman into the park.

The brookies had departed the upper Gardner near Sheepeater and we're told they departed for far upstream tributaries.

Fish were caught. Lessons were learned.

I was able to swing for trout in the "channel" between Earthquake Lake and Hebgen Lake.

Overall, I  used more single-handed Spey technique than I would have thought necessary.

We stayed in the Paradise Valley and drove a couple hundred miles a day. Depending on traffic and construction within the park, your too might do as much time in a car.

In a week's fishing, I witnessed one rising trout.

Feel bad about being blanked on Little River near Your House? I was blanked on the Madison. Gonna take a bit to live that one down. 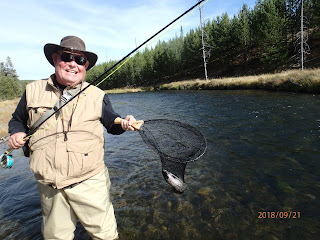 My buddy Mike with his first fish on a fly. He stalked this brown on the Gibbon as it fed intermittently along a grass bank.

Patience, caution, and a restrained desire to cast the piss out of the water resulted in his first brown and first fish on a fly taken on a #16 cinnamon ant (the fourth fly he tied on ...).

Not anymore. Look at the grin.

We're looking forward to going back. The Senator said it was his favortie fish camp out of all we've had.

I'm washing my fountain pens now. There is fiction in the wind faint as the first wood smoke of fall.

George - the furled leaders were a huge help to my guys. Thanks again.