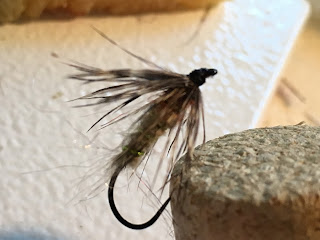 At right, a Hare's Ear Flymph tied short on a #12 Hends dry fly hook.  Mine are tailless, ribless,  and over-hackled.  They work.

I've been tying these with pheasant hackle since last fall and I like the iridescent quality the feather lends. My photography doesn't do much to illustrate the effect; but, the trout frequently comment on it.

"Fooled me," is what they say. Sometime they add other comments not suitable for these pages.

I'm about to embark on one of those "big trips"  that are full of expectation and enthusiasm and which on occasion manage to deliver the emotional reward worthy of the investment.

I'm flying out to Yellowstone Park for trout and grayling. The whole Amber Liquid crew is making the pilgrimage. Proud of 'em. They're going to take a guide day for detailed instruction on various points they want to learn. I might end up doing the same later in the week.

I've been tying and prepping gear.

I've a full assortment of soft hackles and a good number of Steve Bird's low water Spey flies from the Soft Hackle Journal (link at right) though mine only approximate his beauties. I'll swing the double-hackled Spey flies from a two-handed trout rod using my now-favorite OPST heads. (Echo 10'6" glass switch rod in 3wt. Love this rod for trout).

Steve also has an example of Rene Harrop's green drake I keep staring at over on his site as well. The Lamar Valley waters will have some of the smaller sized green drakes  (I am told these are properly red quills, like I know) next week if I am lucky.

I've read-up on the entomology and was not surprised to see that "green drake" covers a number of examples present throughout the year in those waters. I thought there was only the "big"  guttulata in common exposure. Wrong I was.

I need to buy a western water's guide. I have Ann Miller's Hatch Guide for Upper Midwest Streams but am lacking on the insect guides for "destination fishing." I need to remedy that deficiency.

In the west, there are the "Henry's Fork" style of green drakes which are the grandis species. Like the eastern variant, these draw fish up in the same fashion of the Michigan hex -- the hexagenia limbata.   But the grandis isn't the end.

In the fall in the Lamar valley,  instead of drunella grandis we seek to imitate the timpanoga hecuba  sub-species. Along the coast there is even another subspecies.  It was here my entomology went  awry.

There is a red quill that looks to me and others like a green drake. I asked a distant friend who actually is an aquatic biologist about these invertebrates and was told "common names rule unless you're publishing." He went on to explain that he's become more a presentationist in his fishing over the years and doesn't worry about the precise nomenclature of the hatch or in the design of his own flies anymore.

"Big mayfly in #8-10-12 with a brownish or copper-greenish cast" was how he described his own efforts at the fall hatch drake on the Lamar.

"They float a long time before flight."

Good enough for me. I'll take a couple sample vials and see if I can pickle a couple in alcohol for some meaningful observation. I feel I've run into Steve Martin's old SNL routine of "what the hell is that?"

New waters. New bugs. A box of flies I've tied myself. A flask of scotch. A can of bear spray.

I've only tied up 20 white miller caddis and a handful of spruce moths.

A fellow could do worse.