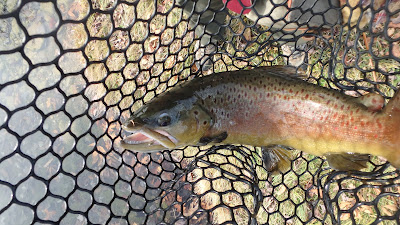 Above, a nice 20+" brown all colored-up. Thick-bodied tank.

I did some end-of-season fishing this weekend. I had a blast. I was on unrestricted season flies-only water that is open year round. I did not rob the redds! There were a few pairs showing some interest but I suspect the mating dance has passed for most of the the browns. Fishing from the bank. 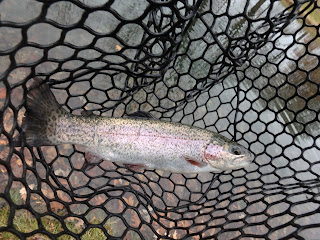 At left, a real tail-walker rainbow. He made the album for his circus act.  Fought hard for a fellow only a little over twelve inches. Maybe fourteen. Maybe.. 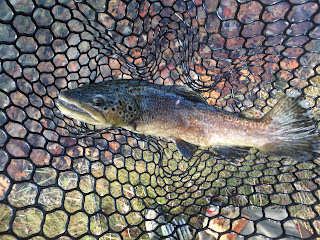 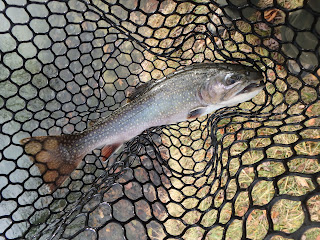 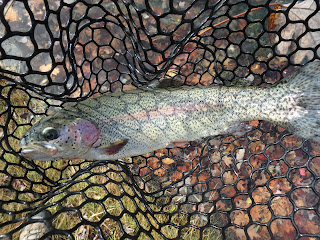 A nice rainbow something like sixteen to eighteen inches all peppered-up. Stunning. 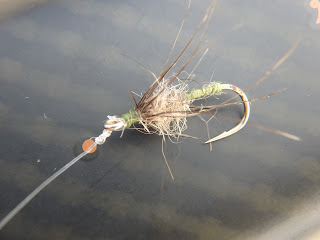 A hare's ear flymph in 16 : a favorite of the rainbows. This fly is "resting" after several fish. I believe this is a brown hen hackled fly. Note how well the teased hare's ear holds up. 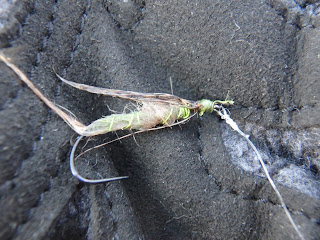 Grouse and synthetic hare's ear wrapped in micro-wire . Quite difference from the natural above though I did wire wrap the the whole thing so there's that ...

A wire wrapped SLF Hare's ear in #11 after some serious use. This fly took eleven fish in an hour. Same fly. All species. It would drift through a fifteen to twenty foot deep pool on very little current and the fish would take. I'd wait. I'd wait. Then I'd smoothly take up tension allowing the fish to hook themselves. They'd dive for the deep and the hookset was performed without any sudden motion from me.

In this cold water, the stream bite was short and soft. I caught one fish on streamers but had tons of short takes. Using the soft-hackles allowed the fish to catch themselves!

I lost the above fly on the next fish electing to cutting the line rather than digging in the gullet. Meh. He had hammered the fly -- one of the few to do so -- and rather than the side-jaw hinge hook, he'd swallowed it. So, I spared him the rooting around.

I haven't had any extended time on the stream since September and the Driftless so I was thrilled at the three day outing here. Great time. Fished with some fly typing buddies from the Beer Grotto Monday night sessions.

Can't wait to go tomorrow night. It is consistently the highlight of my social interaction each week.

Soft hackles -- even tied in the clumsy fashion evident in my wire wrapped above  -- can save the day. As I show in this post, they can withstand serious abuse from fish after fish while continuing to perform.

I didn't take a single fish on the Hornberg. Disappointed. I did take three trout on the surface with a copper-hued trailing shuck CDC X-caddis fly. The trailing shuck business works for me (Thanks, Lauren!) and the fly performs well when drowned and pulled as a micro-streamer.

It was the soft-hackle fly which dominated the weekend, though.

There was a fair amount of scotch taken internally for strictly medicinal purposes once we left the stream. It helped restore the humor after hours in a cold breeze.

Enjoy the Thanksgiving holiday. I'll be grateful for a great pre-holiday weekend outing!