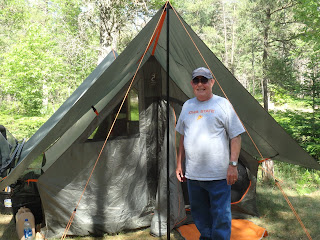 At left, my walleye fishing buddy Mike (takes me into Canada with him when Canada is open)  in front of the Nemo Dark Timber tent we used for four nights here this past week up on the Au Sable outside of Grayling, Michigan.

There are no grayling in Grayling, Michigan anymore. Just wanted to clear that up. 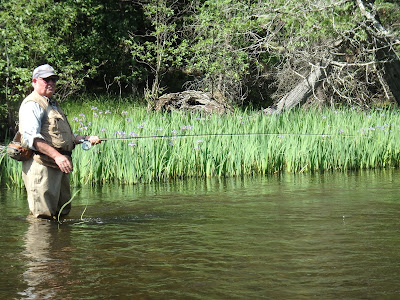 Mike fishing the Holy Waters section of the Au Sable mainstream down from Guides' Rest against a lovely batch of iris. They're not native but they are lovely.

So, we had bluebird days without a cloud (trout hate bright days without clouds) and cool nights (37 Wednesday night by the tent thermometer before dawn).

It was a Michigan summer outing. We had warm. We had cool. There were rumours of Drakes and Hex. There was a dramatic cool down in the evening we went hexing and ...no hexing. In fact, the river died about ten minutes before sunset that night and stayed that way for over an hour growing cooler and less hex-like.

We caught fish. Nothing big ... but fish.

We ran into poachers on the Black taking fish on chicken parts in a john-boat and putting all of the catch into a cooler. We didn't realize what they were doing until they slid the boat past us over gravel then proceeded to float a spring hole and vacuum the fish out indiscriminately. They were locals. They were in camo, And, I didn't want to get shot. It happens. 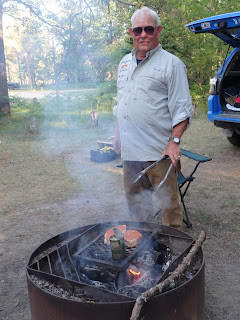 We ran a dry camp. No alcohol of any sort consumed. No damage done there.

We engaged in first class bushwacking without breaking any rods. We caught fish on size 18 soft hackles and size 14 caddis as well as a few more specialized flies and micro-streamers.

It was a good outing and all worked well.

We fell asleep in the Nemo Stargazer chairs reviewed in the preceding post so I have to say they passed a "trout fishing" comfort test.

Obligations keep me from the "trout belt" of Michigan until August. My next big outing will be the Madison River at Sun West during July. Lifetime trip, I think. I'll let you know.