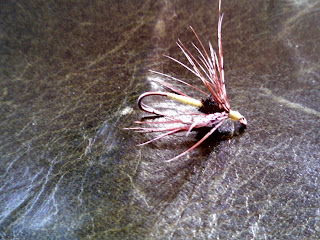 It is spring. Almost.

At left,  a Partridge and Yellow Spider ( I think it is yellow and not orange ...label fell off thread) soft hackle.

I can't see color so I have to depend on the labels and when they fall off, I'm lost.

Anyway, spring flies. Too early for them here, but I've tied some. I tied the ones I want to fish most in my last sessions this year.

There's a dedicated group of fly tiers who meet on Monday nights at the Beer Grotto through the winter. They start in November and tie through until about now when it is time to work on the grounds and go fishing. It's been great to get together and think of spring trout all through the winter.

We probably won't get together again until fall.

This weekend: bluegill warm-up. There's a small warm water pond downstream from me where the crew teams practice. The river and my local trout stream are high and unpleasant. 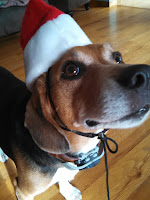 The Christmas beagle has appeared at my house - actually it is Lou the foxhound as I rummaged in a particular household cabinet. He's fairly tolerant about wearing a Christmas hat. Has never made it far enough to be the Christmas card, though.

He's tolerant here because I'm holding Tillamook cheese. He howled about five seconds after I took this picture.

I'll howl for cheddar, too. 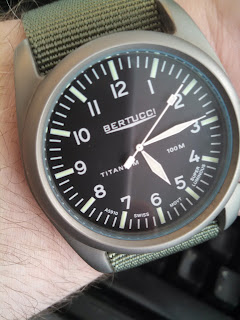 New field watch I'm trying. Could be a keeper. This is a Bertucci in titanium.

Turns out, it is a little hard to find a basic field watch for a price you might want to pay. There are "cheap" field watches out there; but, they fail. There are overpriced watches with solid outdoor vendors' names that pack plastic watchworks. Be careful of those.

There are some great field-grade watches out there too; but, I'd rather a custom piece of cane for the price.

Bertucci is a little bit of a crap shoot as they're newer to the market but if they hold up: bargain.

The crown won't fall out on this watch - hopefully - as it did in my last Timex stopgap. Even $32 is a lot for something that fails in a month. You go broke on "cheap" that way.

The dial is big enough to read without glasses. It tells the time. Screw crown. Solid lugs (no little pins to fall out allowing the band to part). Screw case. Sapphire crystal.

I could use a phone to tell time but then I'd be handling the phone on the stream and that is inherently a bad idea.

I've dropped sandwiches on the stream. If food can slip my paw, a phone surely will.

I wore a 007 Seiko diver's watch for some years. Massive thing. Unbreakable unless I died in the process of its failure. I put it on another guy's wrist who needed it more than I did. Good watches are transient that way, just like good fly rods.

I'm happy with a field watch that costs less than a decent snow tire.

If I get a few years out of it, I'll be very happy. My outfitter wears one of these and he'll put it through more abuse in a season than I will in a decade. Works for him, should work for me.


I'll take my snow tires off in a couple weeks.

It looks like spring out there but let's not get carried away. I drove through flurries to fish the Au Sable two years ago on the weekend before Memorial Day.