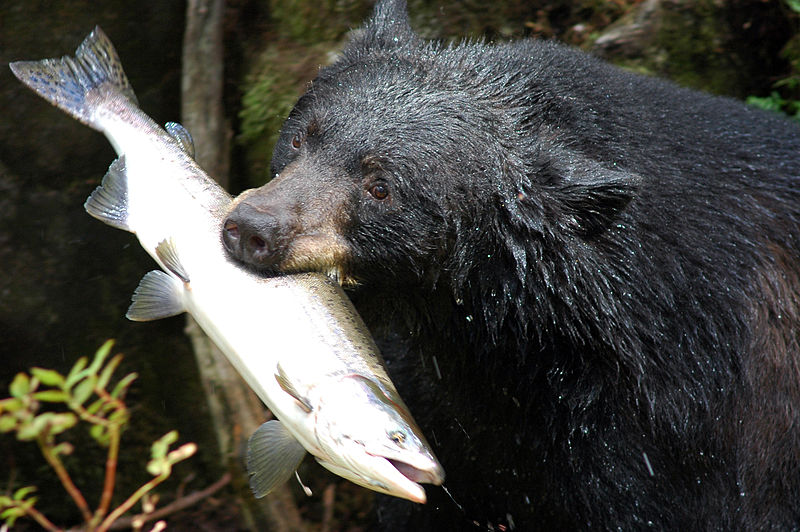 At left, our inner selves. All of us.

Unattributed US Government photo in the public domain (2004) and hosted on wikicommons.

The season is upon us and we're just a bunch of bears inside.

It's been a long winter. We're hungry for adventure and for trout. Some for steelhead. Some for salmon, too.

We're moody and disappointed we have things to do with sow and cubs and in and around the den instead of where we want to be: on the water.

We're beady-eyed from winter and occasionally grizzly. We hold new rods in our paws down at the local fly shop and growl: too damn expensive and the old one works just fine.

We nod at the other bears eyeballing the stream. We scratch and wonder when the berries will come in at the farmers' market.

We think about waffles.

We hope for no killing frosts that might set things back. We stand in cold water. We hope.

We dream a little about the summer meadow streams, too.

I was on the river Sunday night. I was back on Wednesday night and I'll go again tomorrow night. I'm after the shoulder-season fish.

We've a few BWO hanging around in my part of the world. There are fish on the surface at dusk.

The wood ducks are nesting in the wetlands next to my house and the deer are in the north meadow arguing about where to put the crib and dresser.

We've rain today and a small thundershower blowing through now. When the thunder comes, the turkey in their roosts cackle and yelp.

I broke in a new pipe tonight using an ancient tin of MacBarren Navy Flake. It's fifteen years old this spring. It's come into its own. I've used it for breaking in pipes for all that time. The newest is a Peterson army mount  69. Great little pipe and durable in the field. I left one in a boat in '98 and have missed it since. Peterson started this line again and I had to have a replacement.

I usually buy estate pipes. Just like good rods and decent reels, there's more than one owner's use in any of them. This time I got a deal and bought new. I've still got thirty years in me for it.

I need to go and finish a story. I need to go fishing. I'll rise early; do the ink work; then do the day job; then find the stream. I can eat when it is dark.

I can sleep when it is winter.

I think dusk in the early spring is my favorite. I like the surprised look on the Cooper's Hawk as he flies by at hat level when I'm still on the water. He's making his last pass for the night before the bats come out and he's surprised I'm there.

Bats seem harder to fool these days then when I was a kid. I spent half my youthful evenings throwing pebbles and watching the bats swoop in and later ... I learned to trust sonar, too. More appropriately, I learned to trust a hole in the water - that cloud of silence - a sonar image might reveal. Image processing got its start in signals processing and the signals that were of the most interest: acoustics.

There's a great article in the Anglers of the Au Sable journal about a lateral line in trout and their perceptions as measured through it. Fascinating stuff. I'll write the author and see if I can share a little of it here.

It's hard to go against type.