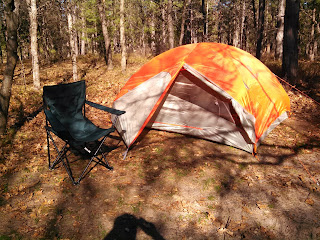 At left, the camp.  Wonderful day last weekend and I dashed to the South Branch of the Au Sable to Canoe Harbor Campground at the north end of the Mason Tract wilderness.

Had an owl at night in the campground (I had the place to myself). Deer stamping a 3 AM. Porcupine in the canoe trash by the river 300 m away. Boom - 3:30 AM. Great night. Awesome. 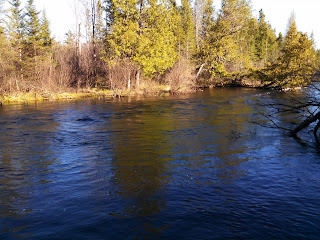 The water. The South Branch was regrettably flowing over 400 cfs at the gauge station which makes it hard to wade. 350 is about my limit and somewhere in the low 300's makes me more comfortable. The flows here are fast out in the riffled (and deep) main current but the calm pool in the foreground offered a little room for casting and a nice slow foam line courtesy some upstream debris. I took two fish here: a 6" and an 8" though the 8" was a near-to-hand catch-and-instant-release fish. He spun.

I hiked in nearly 3 miles to get to this spot. I tried one slightly downstream but the current was fast and the eddies poor. 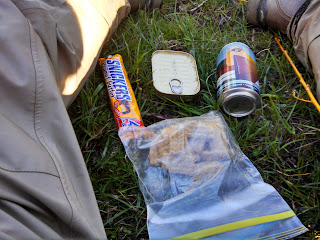 Improvised "first supperizies" of smoked oysters, a Snickers bar, some wheat crackers, and a a Bell's Oarsman. I sat at the bottom of a very steep hill at a place called Laudry's rest ... if memory serves. I could be wrong on the name.

I watched my two trout rise as I ate. Olives? I picked a nightcrawler out of the water in my hatch survey so I can't say what they were eating.

Should have had a 7' 3wt. Instead, had a 10'6" fiberglass 3 wt switch from Echo. Worked but the 7' 3wt would have been better for this fishing close to the bank. 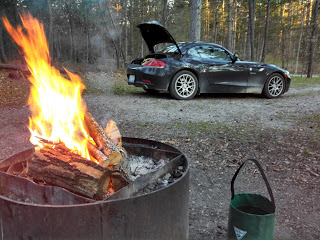 The start of the evening fire Saturday night upon return to camp for "second supper." My trout car in the background. That's camp water in the foreground. No water, no fire. 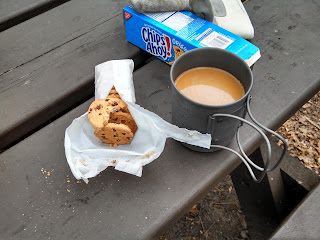 Twenty-seven degrees overnight. A little sharper than I imagined. Gear worked fine. Toasty. Windy in the morning even in the woods so no "twiggy" fire on top of my Fry-Bake pan to make biscuits for biscuits-and-gravy. Thus, improvisation.

That first cup on a sharp morning is delightful. Canned condensed milk works fine for gravy ...or for creamer. 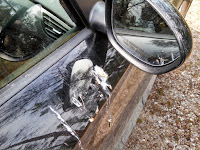 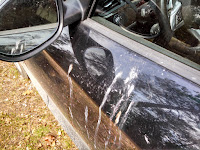 Small problem in the morning with a lonely robin who did his best parakeet-in-the-mirror bit while shitting down both sides of my car. Should have folded in the mirror. Has never happened before.

Trout camping again in a week. Trying to get more season under the belt this year.