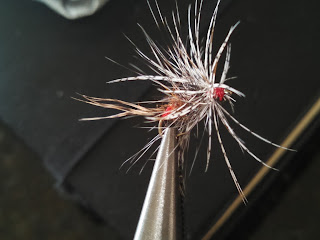 At left, hardly an illustrative photo of my own tie of the Jingler.

My history on this fly is very meager. I understand it originated in the border region. The defining characteristic seems to be twin hackles: at the head a soft-hackle partridge followed by a stiff grizzly hackle, thin thorax and abdomen, and optional tail.

Jonathan Barnes ties - and fishes - his version of this fly over at Onstream-Guide.com. He's a guide so better to listen to him on the fly's use over a fellow like me.

I cannot find anything about this fly in my reference materials. Matthew Eastham has a write-up on his own sparsely tied version at his site North Country Angler. That's a blog I follow because of the photography. Also, there is a write-up in Eat-Sleep-Fish from a couple years ago when discussing large dark olives ...and the LDO Jingler pattern is described : Eat-Sleep-Fish.

My tie is the bushiest of the bunch. I take the phrase "unholy mess" to heart in the execution of this tie.

Here's another example - with poorer photography: 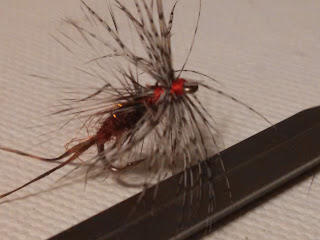 This is in the "failed tie" bin of flies I give the Amber Liquid guys. You can see the distinct separation here between the fore-hackle and the aft-hackle collar. A good tie shouldn't have that separation.

I've added a split tail of pheasant hen to this tie: waxed.  Yep, a waxed tail. It helps with that Mayfly dimple pattern. I've cannot remember it referenced in literature but I'm sure I read it somewhere and cannot properly remember the attribution. My apologies to the skilled hand who might have recorded the trick first.

Short version: Flies on the surface create an interference pattern from the deformity of the surface layer. From beneath the water, this pattern is much more pronounced than the actual spec of a fly. So, trout looking up have to see the moire more readily than the object which produces it. I took lots of physics/optics in college. Tons. Had direct application to my field. Anyway ...

The dry fly is largely - in my mind - predicated on this moire effect.

The Jingler reproduces dimples much as a Borcher Special will with the added element of the mobile soft hackle that we'll all recognize as moving from the slightest travel of our fly. So, we get an automatic "present the fly as a living object" effect coupled with the known killing moire interference pattern that does indeed draw fish "up."

The Jingler (my version for early spring evenings):

Abdomen/Thorax : light dubbing with red-brown mix SLF not on dubbing loop. The goal is a loose sloppy sparse body. Use less then use even less dubbing.

Back Hackle: grizzly. Use a medium sized feather. It is tied in tip forward through itself (or nearly so, tightly) in five or six turns.

Front Hackle: medium sized Partridge tied tip forward wrapped closely to the grizzly. Two turns ought to be plenty bushy. The hackle will seem too long and too full.

If you tie it well, it will look like an ungodly mess. You'd only ever tell a grandchild it was a nice fly. You're fishing it dry and you're letting one set hackle float the fly while the other attached to the film "wiggles."

It seems to work. I'll not say "killing" because I'm still pulling reticent trout out of water too cold. It does let me fish a soft-hackle as a designed dry fly.

I give this fly an up or up-and-across presentation as if stalking with an Adams, EHC/DHC, or Wulff.  It's fun. It worked last fall. It is helping this spring.

I do not us a dropper on this fly. I'm taken with the motion on the water and will not interfere with tying my usual improved clinch onto the surface hook. If I used a tag to tie the surface fly, maybe it would be fine. I'm not fighting those tangles yet this year.

If you are fighting those transition fish at evening's end who are clearly rising but just not taking your offerings, try the Jingler. It helps.