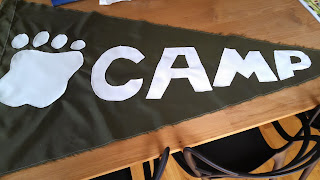 At left, the pennant of Camp Cub - our family camping outing for the grandcubs. Yes, that is a bear paw.  Fits some of Amber Anglers guys just fine when we're a little grizzly around the edges. Maybe we'll drag the pennant out to fall fish camp.

Some friends have asked what it's like camping in Michigan. I thought I'd illustrate. I'm just back from an outing the last couple of days.

Fish report: South Branch Au Sable at Highbanks. Caught 4 Friday evening. Missed hook-up on three others. Caddis fished on the surface. Everything ignored sub-surface. One small brown trout, one small brookie, one 12" brookie and another 10" brookie. Dark fish. Really darkly colored.  Left the phone in the car then hiked almost 6 miles round-trip in and out packing my boots and waders in a day-pack. Didn't go back for the phone for pictures after I reached Highbnks.

Had the place to myself. Lovely evening with occasional gusts (every 5 - 10 minutes) right down the river. Saw tons of bugs. Some little #16 Henny but the breeze blew them all over. Caddis were the things. Light colored, too. 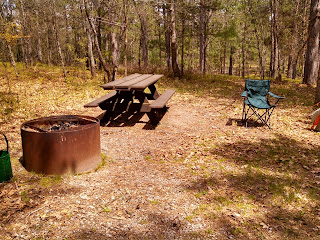 Here's a typical site. This is what you get - less the camp chair. Sometimes, there is also a lantern hook. Usually not. Varies by public campground.

This is Canoe Harbor Campground [ here ] at the north end of the Mason Tract [ here ] in Michigan. 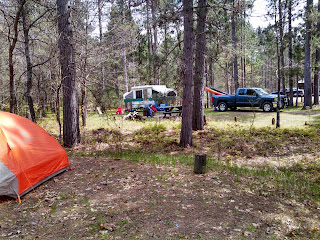 Here's my tent pad (left edge) and the neighbor's site. Yes, they're close together.

There are no illusion of private conversation and in this case, I  am now fully up-to-date about American Idol even though I'd rather stab myself in the eyes with flaming hot pokers than watch television.

My neighbors were talkative. I'd say they were talkative for no good reason but I'm sure some primitive communal function was accomplished as a result of two hours of after-dark musing on the fate of reality television. 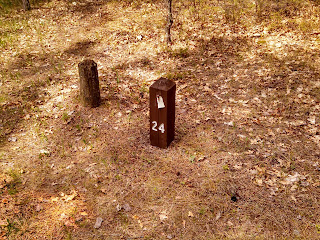 At left, a tag post. Every campsite has one. You place money in an envelope, drop it into a pipe, and put a corresponding tag off the envelope here on your tag post to identify for the rangers who is occupying the site.

No envelopes in the bin on Friday. I wrote a note, put money and the note in a dog poop bag (I always have dog poop bags. I own a foxhound/beagle and they poop a great deal) , and put a matching note on my post. This self-serve is better than the 11PM Ranger check waking me for not having a tag on the tag post. 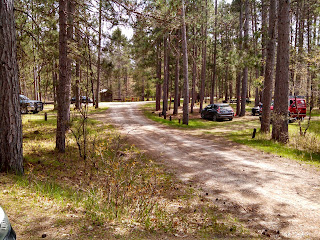 This is what campsites at Canoe Harbor look like. That's a handicap accessible privy in the background. A hand well is just about equal distance from site #24 off to the right. I'm standing at the tag post and the nose of my trout car is just there in the left foreground because I'm a horrendous photographer.


So, you're close to nature but sometimes you're close to elements of civilization you'd just as soon not be. Folks generally are as sociable as saying "hi" when walking past if they catch your eye.

Here's a perspective from breakfast after giving a casting lesson. 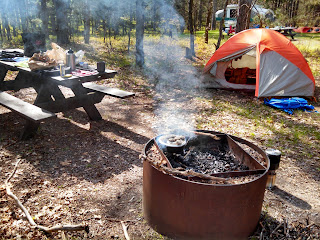 The kids next door were a couple of full-time Army National Guardsmen based at Camp Grayling who were camping in a pop-up for the first time because - and they'll get extra-credit for this in the afterlife of their choosing - they brought their girlfriends, one of their mom's and a dad. I'm not sure which belonged to which but it was a bit of a clanish outing. ( Scottish ... not Ku Klux).

Anyway, these guys were fine and while I didn't want to hear the conversation, they were just kids who had never fly fished but were big kayakers even through the winter.  Tent campers, usually.

I arrived back at camp after dark and they came over unbidden to see what I'd been doing with a fly rod in the dark (I explained mousing and "the hex" and clarified I'd been doing neither but merely "humping" in the manner all good infantrymen).  These were 11-Bravo kids.

I had to correct them that I wasn't prior Army. Other old fat men made hikes, too. I don't know why they thought to just "come over" but there they were. Probably were interested in "the old guy"  who set-up camp in ten minutes then packed out.

Trout car, too. They liked the ride.

One of the fellows had to show me his fire-making skills to "help" using his new Bear-Grills grade knife with a flint in handle. I was tired from the hike and a little hungry in the deep dark but patience is needed with the junior enlisted. Took him a bit but he managed fire when I gave him an alcohol pad, a bit of lint and a cotton pad coated in petroleum jelly, all wrapped in wax paper inside a tinfoil pack.

They were two beers past meaningful instruction and happy that they'd achieved fire, departed.

I used a Banks fry-bake pan to make biscuits for biscuits and gravy. Worked like a champ. Twenty-five minutes and browned biscuits without scorch and burn from my first attempt.. Now, I can make biscuits in cast iron just fine. However, my first few batches of dutch-oven biscuits weren't this good!

Banks fry-bake pan [ here ].Worth the money. Great gear. Beats anything else I've used that might be light enough to pack-in. The 32 lbs. dutch oven is better; but, it's a 32 lbs dutch oven. 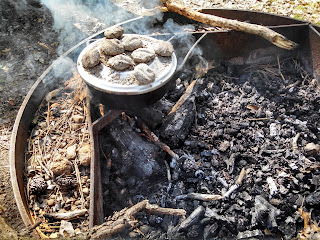 Cooking. Warm coals underneath (10 minute fire of prior night's char, knocked down to active coals supplemented with a couple twig bundles to get going) and briquettes on top for control. I was cautious of the "twiggy fire" on top in case of wind.

Coals work for control: eight in a star pattern. Car camping, after all.

Rotate the lid in 7 to 10 minute intervals for 25 minutes. 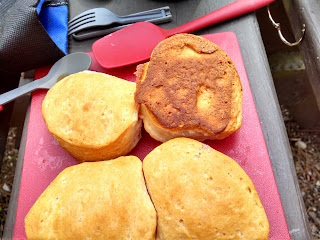 Not bad for an old bear.  Worked out perfectly on the first try.

Can field-expedient coffee-cake be far behind? I'll have to practice on the Amber Liquid guys before making it for Beargirl.

Yes, those are hiker-grade fold-up utensils. They're tougher than they look. MSR makes them and they work.