The Most Important Lesson 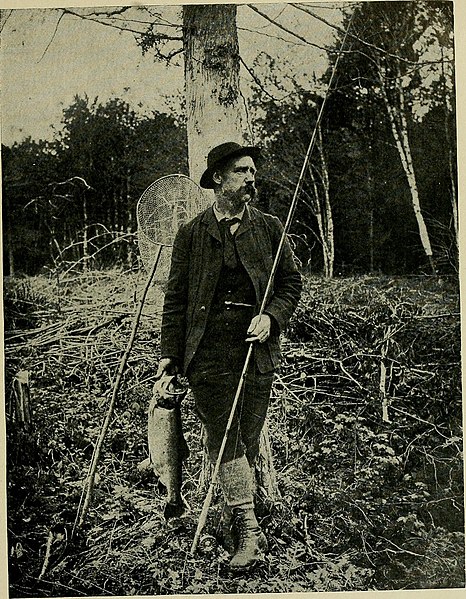 At left, a photograph from 1890 by Edward Samuels from the library of congress hosted on wikicommons. That's a fine fish and this fellow has clearly learned his trade well.

I gave one of the most important fly casting lessons of my life this morning. I had my 11-year old grandson casting my 88" Gelsdorf cane 4 wt  in both roll and overhand casts within about 10 minutes of picking up the rod.

There are some reasons for this and while I can take some displeasure in seeing their white-bread world and its restrictions, probably best they don't have my upbringing.

I was driving on my own at 12 covering 9 miles each way back and forth to the ranch. Times change. My grandson cannot depress the brake on my John Deere with all his might and so can't even idle it around the meadow.

He lit his first campfire this year (pinecone tinder) - and struck his first match. He's eleven. We haven't progressed from matches yet. Flint and steel next year.

Anyway, he took to the fly casting like a duck to water. He's no bad habits to break having only been fishing a couple of times otherwise (that fact itself a travesty) and does not have the "spin casting" business to break out of him.

More importantly: I was able to be slow, encouraging, and jovial about the whole thing. My outlook was "if it doesn't take ... it doesn't take." Oh, it took.

So, Sunday morning on the last of Bear Camp this week, my grandson learned to put a fly line and leader inside a Hula Hoop from 35 feet away with two different casts.

Yes, I am doing a little Foghorn Leghorn around the house right now.

Broke camp. Put everything away. Beargirl has the sinus infection/virus I fought all week. Brutal but manageable. She's down though and so no harm, no foul. Camp's over and she's allowed to be down if she wants.

I'll take the grand cub bluegill fishing next year. It didn't fit this year and physical activity is not his long suit. Fly casting? Worked well.

Sold him on "fish hunting" with a fly rod ...far different than fishing.