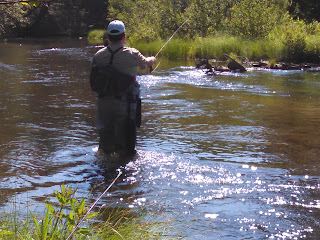 At left, action shot of an Amber Liquid Angler casting on the Manistee in a great bout of tag-teaming pockets. We had to fish to habitat as there were few rises to indicate active fish.

Last weekend - the weekend before the 4th of July holiday - saw a quickly planned outing by some of the Amber Anglers to Grayling, Michigan and the waters of the Manistee. Ostensibly, we came for the Hex hatch.

We fished a wonderful stretch of river called the Deward tract which is blessed with a complete wilderness outlook. There are no homes and no campsites. No canoes, either.

Deward's namesake is an abandoned logging boom town of 125 years ago.

"Should have been here last weekend."

There were some hex around and some gray drakes and some caddis and ... Look, It was buggy as hell. The hex might not have been driving the bus but there was plenty to use to catch fish.

There were also plenty of fisherman.

It's been warmer than usual and we've made-up for a laggardly spring season with a full push into summer. Bugs have come out and fishermen chasing the hatch descended. The hex is a night-fishing event and with the heat we've had so is fishing with everything else.

The hex however brings out combat fishing and so to escape others we went to the wilderness of the Deward tract.

It's a wild stretch home to brookies and a few browns. The "big fish" was probably a brown I lost just upstream of here and even he wasn't "large" maybe pushing 12". The angler pictured landed a nice 8" brookie which stood for the documented "big fish" of the trip. He has the "trophy cup" at least until steelhead season.

Not all of the Amber Anglers are fans of brook trout. I'm not a fan of combat fishing. There we have it. You can't head to the water at 7:30 PM on a weekend during the hex hatch and expect to claim anything worthwhile.

The fishing was fun and technical. It required solid casting and some stealth. These are not typically Amber Angler strong suits. We did explore and find an off-map "secret access" that is completely undocumented in the popular local books but is a legal and available access point.

In short, good outing (except to a "small fish despiser" who failed to hook a fish, small or large. Makes 'im testy.)

Here's a lovely posed shot of our angler above: 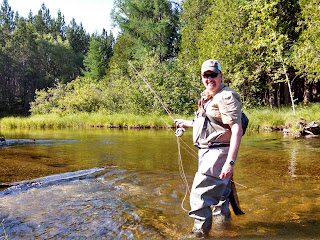 I'll probably use this one at his funeral. We fished together Friday afternoon and really saw some great country. I'd expected more risers but the late afternoon heat ... 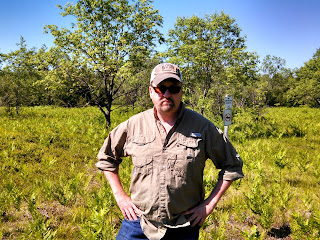 This is the same angler as above and this is the more traditional pose when a photograph is requested.

I almost lost my phone in the river during the outing following this pose while doing a one-handed snapshot routine. Luckily, I didn't immerse it and have a Monday morning $700 replace-and-upgrade bill.

I'm getting a new waterproof camera. Never again will I juggle an item I need for commerce over a 7" brookie in the dark. 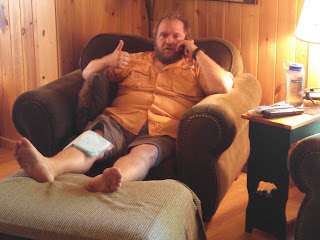 Alas, this is becoming too frequently an Amber Liquid photo. Ice pack.

We're getting old. It's beginning to show.

Thus, more physical training. Who knew the Stairmaster was a fly fishing training device? When we have to pack-in to find clear water, it certainly becomes one.

Next weekend (after the 4th) sees a casting clinic for two-handed work put on by my local fly shop: The Painted Trout. Two days of instruction on the water - free. Of course there will be instructor tipping and some gratis beverage sharing and some gear buying but formal instruction on Spey? Great deal. Cannot pass it up.

I fished the Mansitee exclusively with an 8' Steffen Bros. 4/5 blank laid up for me as a custom by Mark McKellip here of Michigan. Mark makes stunning cane rods but is a huge glass fan and so will put those in his queue. The rod: perfect for the fishing we did. Could have gotten away with a nice 3 wt graphite on Saturday evening but fiberglass is safer for those of us who stumble in the stream.

Fish. It's a little about the fish. Its a lot about the stunningly beautiful places they seem to live.