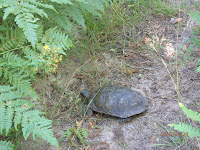 I'm going to e a little slow with the whole Pine River report much like my new friend here at the left.

However, the river at its slowest has current as fast as you can sprint. This makes a two-foot deep cobbled sand/rock bottom a treacherous place when a rock rolls from underfoot. Sand banks which threaten to suck you into them don't help much. The fish are wild and they are aggressive though you'll find much habitat you think should hold fish ( and will, on the South Branch of the Au Sable or the Pere Maquette ) which does not. Still, there are fish.

Drift the river. Don't wade it.

Some snaps and comments: 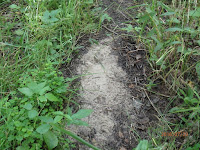 Here's a bit of sand on the mostly sand footing of the Silver Creek Pathway: deer and coyote. Nice prints in one spot. The coyotes howl every night. Nothing obnoxious but they're about. 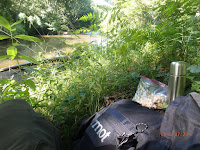 Saturday morning snack on the banks of the Pine: western loop of the Silver Creek pathway. Better river image to follow. 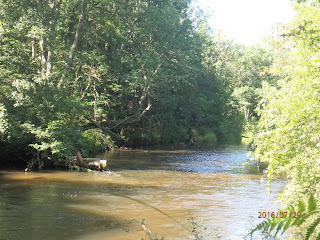 River. This is the typical view. There are a great many riffles though the river was very low. There's plenty of water - and very cold water - but if this is the river at low, I'd hate to see it after the 4.5" we got at my house on Saturday! 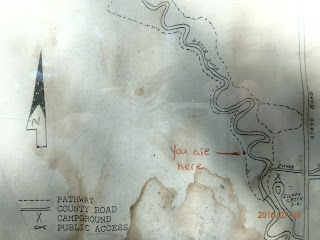 The trail is well marked and offers limited access to the river. Much of the trail when it follows the river is at least fifty feet above the bank. Also, the areas where the river is adjacent to the trail without the elevation challenge didn't offer a great deal of interesting water for fishing to habitat. Meh. 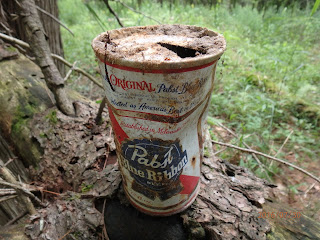 I picked-up two dozen of these out of a snag on the bank. When was the last time you saw a pull-tab can ... and this is old-style thick can and not the thin beer cans we have today? It looks to hold about a quart. I don't think this ws some hipster's PBR. I think this was a guy with two first names. 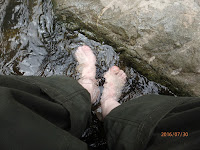 I did some of this after the scouting hike. I could keep my feet in the water a for less than a minute. Cold.


Panorama of where I drank my coffee this morning. I had seven hook-ups total on this stretch of water seeing the fish on the surface on five of those. No fish to hand, though.  I need to work on my downstream streamer release technique with the line to let the fish hook himself before we get to steelhead season. Disappointed in my technique. The trout only took streamers (deer hair ties) or a root-beer colored PTN I used on Saturday evening which I subsequently dropped into the water as I went to photograph the thing.

I'd return in a drift boat or again when flows are at the bottom of the summer flow. It's a tough river.  At normal flows, I want nothing to do with it while on foot.