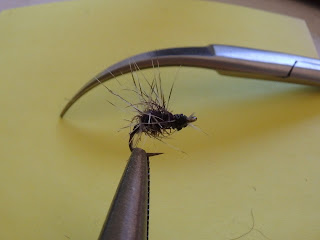 I have better ties that are smaller but this was a good picture. New camera, better pictures. Better - not perfect.

Next week: up north. Heat breaks this week and it might not hit 80 in Grayling on Thursday and Friday, Might not hit 70 on Saturday and Sunday.

It will probably rain all day Saturday which is fine. I'll tarp my campsite nicely on Friday and have outstanding camping gear for wet weather. I've a new supplemental alcohol burner for my Solo stove Titan and so can simmer eggs and sausage even if at sea. I will however gather enough down twigs and such on Friday night in anticipation of wet weather.

Scouting Report: I found some water on the Gran River that will NOT involve combat fishing. 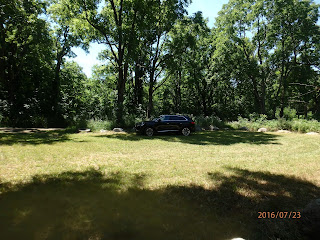 The state game area I scouted with Beargirl has nice provisioning for parking cars. I counted 11 nicely spaced car-parks such as the one at left located around the loop roads. They're mowed-up and fine but for occasional bottle discards from prior hunting expeditions. Pints seem to be the usual measure to break on rocks. Shot, maybe? 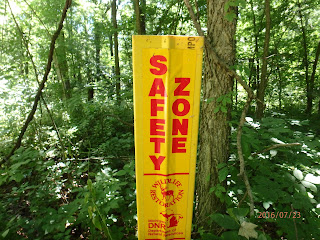 There are some wildlife restoration areas inside the State Game Area and as such, some areas are closed to shooting. That means when we're on the "reading the sign" side we are "in" the shooting area.

Blaze orange looks to be the uniform of the day. Worth noting.

I found two dead deer. One, maybe winter kill. Still has flesh and minor separation of bones (1 leg) by scavengers. Could be a natural death.

One I found was skeletonized and a broadhead with shaft was locked into the right scapula having penetrated but lodged. Looks like a field loss that got away from someone. I didn't take pictures of either. 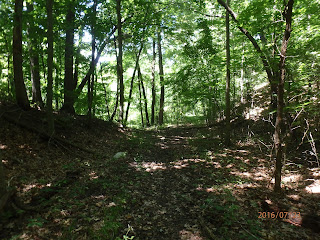 Downhill trail from the road toward the water at site "E" - my reference. Usual sort of dozed-out path now blocked from 4x4 traffic. It goes 2/3 of the 400m to the water. 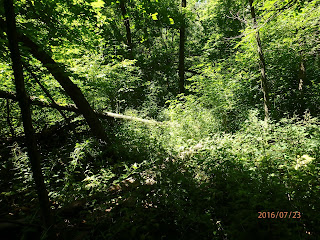 This is the last 1/3 to the river. Of note, it is illegal in Michigan to harm, alter, cut or clear any living vegetation in public areas.

You cannot use tree stands which penetrate the bark of a living tree. You cannot clear brush for camping in areas where "wild camping" is allowed. You cannot clear fire lanes for firearms. You cannot hack your way through devil's club and extremely healthy wild raspberries to get to the river. 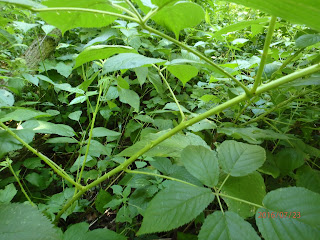 This is a bit of wild blackberry thrown-in: also extremely healthy. The thorns are 1/4" and the leave plates are bigger than saucers. If I could get my blackberries to do half as well, I'd be pretty happy. 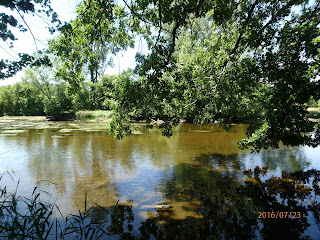 The river. It's about 150' across here. That's an island across the way. 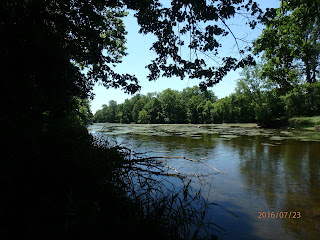 Upstream view. The current here runs for 40' by the entry bank. The shallows are currently populated with aquatic vegetation though flows are at 20-year low right now. Nice spot. There's a pool downstream that held small rainbows, rising. The water was cool. I didn't have a thermometer on me. 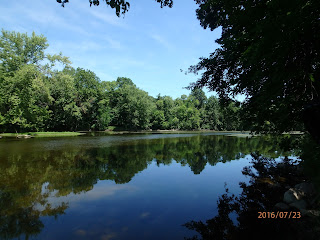 Site "B" offered easier access (30 m walk on clear trail) and this is the river downstream. Around 100' wide as far as I could see. 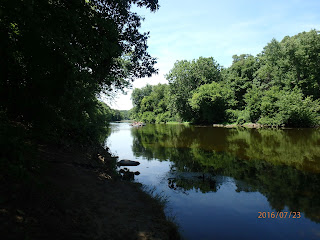 Upstream.  There's a nice hole upstream that 30 or so teen-aged kids were using for a swimming hole with canoes and a couple of cooler in inner tubes.

I was glad that they could show me the hole and that kids still went down to the river to drink beer and swim. I like a casual disregard for the law in summer.

I'm prone to treason against the crown.

Don't mistake good-nature for an endorsement. We're far from agreeing to a consensus on a willingness to be governed.

There's a bit of bastard rebel in almost everyone you meet on the water. In some of us, more than a little.  Just smile and nod, boys. Smile and nod. You never know which ones are the Irishmen.