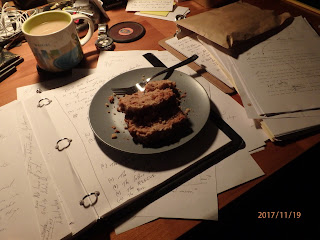 At left, fresh cup of tea, apple bread (think banana bread but with cinnamon and apples covered by a streusel topping) from my local cider mill, and prose.

I'm at the ink but it is a good night here. First real snow of the year this morning. We've had fall flurries but it is now working up to being serious about winter.

I got some new cdc today to try some flymphs tomorrow night at the grotto. There are some beautiful cdc spiders over at the Small Stream Reflections blog (link at right)  and that got me thinking about my early season flymphs.

I have an idea for my early season using a parachute-style pheasant tail nymph.

My first thought driving down the road was that it was a stupid idea. I tie flymphs and fish them subsurface to indicate the larval stages between nymph and fly. I'm well in the water column with these "lures." That's how I've thought of them.

Cripples, drowned emergers, stillborn, and the other surface dwelling non-dun? I use a thick bodied soft hackle sometimes with a drop of floatant.

A nymph -- a subsurface imitation-- as an early season indicator? A post on a nymph?

I need something other than a big bushy dry as the early season/early day partner on a dry-dropper. So, I look it up.

Sounds like my entire spring -- except for the "out perform" part, of course. I always feel I have to work very hard for cool spring trout. Opener was different last year with a nice warm spring afternoon before the cool spring deluge that followed the next day.

Right in my wheelhouse.

Hmm, here's a fellow whose books I own who fishes a parachute flymph and says positive things about it. Also, the PTN is one of my favorites. I tie them with greater precision than a hare's ear so there's that.

Time to smash together a buoyant, upright floating, white posted PTN flymph with some cdc feathers for the motive attraction.

Wait until I post some pictures. You can laugh then. Luckily, trout enjoy being amused by my efforts. My flies are ... beguiling.