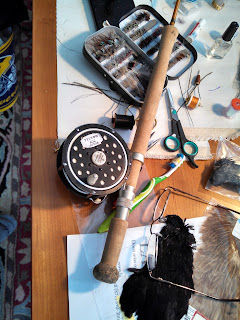 Again tonight the temperatures will be below zero. What we have as anglers are those dreams we've been saving all season long.

I'll spend tonight with the echo of fat raindrops on my tent fly from last May while I'm under a down comforter and a couple quilts. Maybe one of my wife's heater cats. Probably.

I've not tied a fly in three weeks. I've made a tentative schedule for travel next season. I've picked-up my new 4" Bougle from the local which will replace my Medalist shown at left. I need to cut new leather for the drag and somehow a Bougle seemed an easier solution this year.

The Cascapedia -- trout sized -- will be here before spring.

I had a fishing buddy who also has been my writing partner for the last several years. Engineer. Recreational fly fisher. Writer. Novelist.

I drank the last round he'll ever buy me here on Christmas eve: whiskey he'd brought back from a summer trip to Ireland. Seemed the time so I dispatched a sampler bottle.

I don't know how much time I might have left myself. Who does?

I took some of that angst and put it into legacy gear that will cause knife-fights at the wake three generations on.

I'm swinging for trout this year. I'll mount the Bougle for trout on a #3 10'6" glass by Echo and -- with different heads -- mount it on a #7 11'6" Echo as well for steelhead.  The reel is a little heavy but a couple ounces probably won't do too much to me. I'm not a "gram weenie" in most things.

I started back with the pen after a few weeks off  a couple nights ago. I'll start tying flies for the Driftless on Monday night.

I'll let you know for sure when I too am but a stray smile on a character you see once in a while in your dreams. If I wink and raise a glass, you'll be sure and remember why.