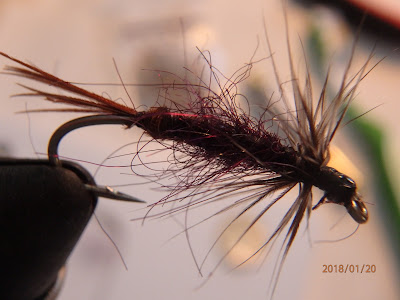 One of the Amber Liquid guys suggested I actually contribute something to the fly fishing codex of our group instead of the "Baked Goods Illustrated" segment.

So, Michigan. Let's cover a series of  invertebrates which casual anglers here in the mitten can expect to reasonably encounter in our streams.

I'll start here because the isonychia is one of my favorites; is active as trout food for long stretches of the season; and is found in the types of places anglers love to fish: cobble, boulder, and -- in Michigan -- gravel strewn riffle.

The isonychia is a mayfly.

This genus is common all over the northeast and has a couple sub-species in the Yellowstone area ... though I am not qualified to speak on western insects.

Above, an iso flymph tied today on a new vise. First fly tied on it.

The iso genus has several sub-species. In common names:

The slate drake nymph is famous for its "racing stripe" down the middle of its back from head to tail. Unmistakable identification when you find this trait.

The iso is active in the fastest parts of streams. He is a great swimmer dashing from rock to rock within his habitat.

He perches on rocks in the mainstream or just off it with his back legs gripping tightly while his foreparts and forelegs make a basket from which he catches and consumes bits and pieces.

He's in the water actively from May through September in one form or another and crawls to the slower water on the stream's side to emerge.

I make great generalizations here across all the species because they all behave the same. It really isn't too important to know one from another.

He's a dark beastie in the water 12 - 17 mm long. He's longer than your thumbnail, then. Orvis sells an articulated imitation which gives you an idea of the substantial length of the nymph. ( I'd don't find tying two-piece flies fun and I can't imagine anyone else does either).

So ... the iso is about an inch long. He lives in rocks, gravel beds, and on small boulders. He's in the mainstream. Trout see displaced iso nymphs all year long. He lives in large populations on stretches of Michigan rivers like the Au Sable.

Most hatches occur in the late afternoon towards evening. I'm not covering the fishing of the hatch or the spinner here. I haven't had good luck with either beyond normal "throw an Adams at it" so I can't really say much about chasing during the hatch.

I have had good luck swinging iso nymphs into pools at the end of cobble and gravel runs right about dinner time. Think of the stretch below Powerline on the Upper Branch Au Sable.

The fishing is simple: bottom 1/3 of the water column.

I like a tight-line swing with small jerky tugs of 1-2" as the swing progresses and I know I'm at depth. It helps the hook-ups and helps the imitation as isonychia do have a jerky style of swimming.

I use other means to get the fly down to that level rather than weighting the nymph. I want the nymph to float free as if lost in the current rather than thump along at the bottom mixed in with the bits of organic detritus.

The color is a bit lost on me though Ann Miller says he is reddish-brown to purplish-brown in body. Sounds good.

The fly is tied short way above the curve of the hook. That's important for the swing. You'll get aggressive trout dashing up to take the fly and turning quickly back downstream. I think the exposed hook helps. At least, having the fly tied this way has ended some of my frustration at slow strip-sets.

Tail and abdomen: pheasant.5-6 barbs. Trout cannot count how many tails a fly has.

Thorax: Wotton SLF in dark claret sparsely wound and picked until ragged. I use a dubbing loop and get a good ratty twist with it.

Hackle: Barred hen in black, solid brown, or dun grey. Early season, the barred or all-black hackle seems to help. No, I don't know why.

It's a good fly and I'll have three dozen in the quiver before opener.

I lost four in a row on one stretch of the Mason Tract last year. Took a fat brown on the fifth tie. There was a lot of timber partially buried on the South Branch Au Sable last year. More than I remember previously being partially buried mid-stream. Snaggy. 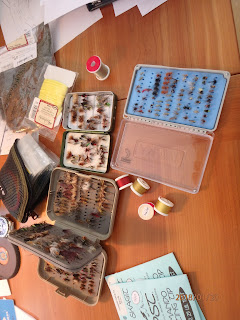 I'm cleaning up my go-to-stream boxes from all of last season. You should do the same.