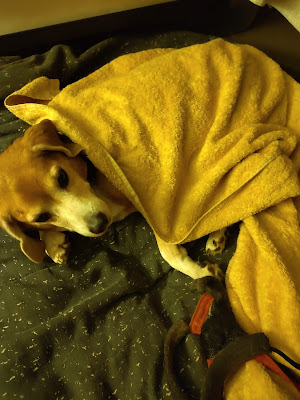 At left, Lou the foxhound practicing his winter camping technique. He's on his comforter (yes, he has his own) as a bottom quilt and uses a light bath towel for his top cover.

I'm working on the winter camping.

It's going to be a solo event for a while because it is Michigan and most folks are cold-averse.  I have most of an inch's mix of ice-sleet on the ground right now. That ice coupled with an occasional bout of actual rain strains any gear.

I'm betting on better conditions on my own runs up north: more snow and less ice.

What I need : consideration.

I'm a wood-fire sort of camper/cook and that means cutting, bucking, and hauling the fuel.  Jeans are fine for this activity in spring and summer; but, in winter I need stouter waterproof gear. I'm not too interested in abusing my gore-tex bibs doing timber operations. Waterproof  hunting trousers are on the way.  The bibs I'll wear when actually out in rain.

I also upgraded the size of my camping saw from a small pocket-sized Silky saw to a forearmed size beast of the same make. These Japanese gardening blades are quite handy. For winter camping I want to attack material larger than 4" in diameter. I will also sharpen my ax.

A top quilt and a sleeping pad with a higher R-value also were in order as upgrades over my spring/summer gear.

So, I'm outfitted down to zero degrees.

I'll use a stout Marmot tent, rig a tarp shelter for reflective heat capture around the evening fire, and practice prepping meals at home so I am doing minimal prep work before cooking.

I'm not willing to invest in a hot tent. I'm not sure how much longer I'd be using one given my trout buddies remind me the alternative to winter camping is drinking scotch by the fire with the pets lying all over me. Hmm.

They tease me now because I wouldn't make the trip to go steelhead fishing in Alaska several years back. I refrain from pointing out that they do not go steelhead fishing presently here in Michigan for hundreds of dollars and thousands of miles of travel less. Meh.  It is hard to beat a toast fireplace.

In winter camps, I'll be fishing largely from the banks and will wear my composite Korker soles for the best grip. I'll fish glass as I will inevitably fall. Glass is very forgiving.

I will also test my set-up for oversight. I have little margin for error short of loading-up and driving out. Let's cover the oversight part early in the process. 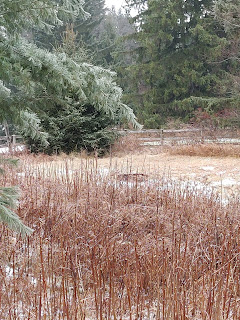 My proving grounds at right: the north meadow with a campsite and fire ring.  We used to have some grandcub camping events there. I still maintain the pitch.

Next weekend? Maybe the weekend after.

I miss the woods. I miss being out and not hear any vehicles. I miss the adventure of simple camping.

A pipe, a fire, a tin cup holding scotch, a book, and stars overhead.

I hope the bears are hibernating. I'll be cooking bacon and sausages. I won't have enough to share.