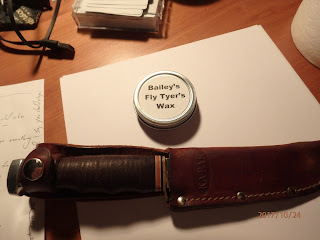 Yes, that's a small KaBar and it was just sitting on my desk so I used it for a size reference. I wear one when I go trout camping and the library shows a little wear from a hard-run at late-season trout.

There's a story behind this but let me show another picture. 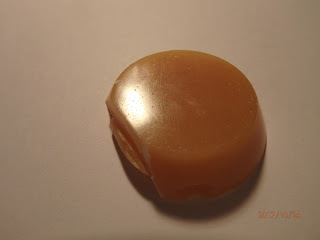 Here's the puck of wax. I removed a piece on the left -- too much -- for a Monday night session here at the Beer Grotto.


I read about the Bailey's Wax--probably named for Dan Bailey-- in an article I found in the magazine FlyFishing & FlyTying as written by Magnus Angus. (Article Here). Mr. Angus does a great job on his review of the product and I encourage you to have a look.

However, you do need to read all of the words. I might not have done that.

This Bailey's stuff is a dubbing wax. Great - I need it for dubbing and if it has sufficient tack (it does) I can use it for my hand-tied whip finishes and never smell the Hard As Nails again on a Sunday morning. (Enough of that you in the peanut gallery).

I sort of ignored the wise words of Mr. Angus about using spirits to remove the stuff from his fingers. Missed that part entirely much to my peril.

The stuff melts if you stick it on your paw. It softens. It also spreads a bit.

Imagine pine tree pitch with a bad attitude from a Christmas tree gathering expedition in your prospective father-in-law's new Mercedes which he has graciously loaned you for the day to take his daughter to get the seasonal pagan symbol.

Now, dubbing with the stuff was amazing. I'm a dubbing loop fellow and I've never had such wonderful bottle-brush dubbing spins as when I used a bit to help my dubbing adhere in the early twists (I don't use a weighted little spinner).  There is no comparison between low-tack stick wax and this Bailey's stuff.

Though trying my new wax with a generous dollop--read "too bloody much"-- on my left index finger looked very cool, it rapidly emerged that I might have done something unwise.

A bit of loose dubbing stuck to my finger and I thought "no problem." Then a bit of trimmed deer hair stuck to my paw as I was tying up some Warden's Worry bucktail streamers and had some trimmings on the table.

Then the  hen feathers -- red -- stuck to my fingers as I was using a few barbs at a time to make the tail per the tying example of Joseph Bates in his Streamers & Bucktails. The increasing tackiness of most of my fingers and some of my tools was becoming a problem.

Then my beverage suck to my fingers.

No, not the wax hand fingers. The glass stuck to my other fingers on the hand which didn't even have the wax globbet clinging to it.

Hmm. Time to clean up.

Luckily I was in a bar and there were some "counter grade" spirits readily at hand, as it were.

So, a little goes a long way. Wax that is. I used enough for something like ten tying sessions on my first try.

Advice: a small flake one-half the size of a dime shaved, kneaded, and adhered to a finger  and not a finger joint would be plenty for at least a dozen fully dubbed fly bodies in size six or eight.

The package is wonderful: that's a screw cap aluminum container and the wax is packaged in parchment within.

The wax is completely non-tacky to start. Knead it for ten seconds and place it on the surface of one medium sized bear paw and ... aggressive pine tar resin.

It's a tool. Most tools require a bit of knowledge to work well. Bailey's wax falls in that category.

I bought mine from a great guy named Christopher Stewart at Tenkara Bum ((Tenkarabum.com). Awesome service.

I still had a bit on the back of my left forefinger this morning sort of matted into the hair; but, I burned it off. Clean now.

Email ThisBlogThis!Share to TwitterShare to FacebookShare to Pinterest
Labels: battle, Flies, The box