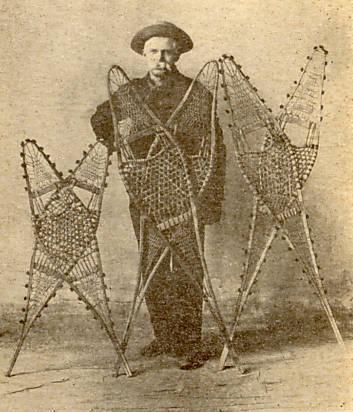 At left, public domain image of Alanson Dunham of Norway, Maine and snowshoes he's made for the Peary expedition (North Pole, 1909).

Mr. Dunham's creations may have a use come open the last Saturday of the month. Right now, I'm sitting out an ice storm of minor proportion (only substantial power outages and downed trees in my neck of the woods, much as you'd expect). Up north in trout country, they're getting hammered.

I might haul my chainsaw north as I'm expecting the campsites to have received very little in the way of clearing downed timber. We'll see.


Yesterday, attended party at my local to celebrate Dirk Fischbach taking over as the Winston area rep. Dirk's been on their pro-staff forever and is the sort of fellow you want to see do well in the industry. He's a consummate commercial angler always ready with a word of encouragement, knowledge about our sport, or a ready smile. Sometimes all three.

I'm also putting together my year. I'm hoping some of the Amber Liquid guys might go to the Colorado front-range for instructional fishing -- the "learn a new approach" style rather than the "let me put a bobber on that" style. I want these guys to have a blast in a new local scene (they're far more social than I am), gain a new skill and the confidence to use it, and see someplace new. If not Colorado, then maybe YNP.

I'm going to RMNP right before July 4th. Canada on the first week of August back to the wilds of Wabakimi and Woodland Caribou National Park on a fly-in,  somewhere in September after kiddies return to school (maybe the epic Michigan UP trip), and in early October out to points west.

I've got a good year lining up.


Opener in Michigan looks tough. Entomologically speaking, we are behind on the seasonal development of aquatic insects. Prospects for the Hendrickson hatch are poor.

Subsurface: streamers under and along downed timber (of which I'm sure we're adding inventory this very second), small nymphs and soft-hackles in the flow and eddies, sculpin and crayfish patterns low and slow.

Hendrickson nymphs will be active. They "practice" in the flow sometimes for several weeks before hatching. I just doubt we'll see dry fly action this year.

I started this effort in the middle of last week as the long-term forecasts and the water temperature survey information started popping-up. Snow in Grayling last weekend and this weekend didn't help much (looks like 6" of accumulation in the past 48 hours). Snow is also forecast through Tuesday up there.

The water has been low but ice run-off is still a great deal of very cold water going into the rivers. It might warm quicker with the lower flow rates but that's a process.

I'm still expecting the fly shop reports to contain "saw some BWO and a couple Hendricksons" three mornings this next week because: fly shops. You don't attract patrons by saying "snow chains required on river access roads."  It's money.

You might see some bugs too if it were your money riding on it. Not faulting anyone.

The good news: the rivers are still full of fish and if you can get on them without combat fishing, so much the better. Nothing wrong with catching fish on streamers and nymphs.

Twist my arm and I could spend the entire year only fishing coachmen-style flies. I've tied some royal trude based on what I've seen over on Alan's Small Stream Reflections site (link at right). I'm still working out the proportions.  Look at his. They're lovely. 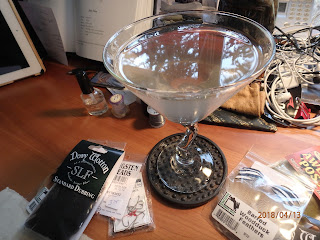 Friday night lubrication. With the bucket of cold water I dispensed on the opener hopes up above, one can use the liquid courage. Gin, gin, gin, and bitters. 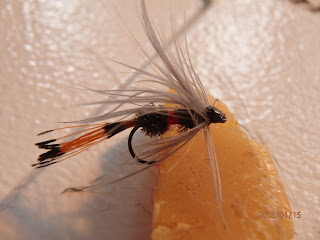 Royal Coachman with a dun hackle. I'm reflecting on early season meaning subdued, darker, and largely smaller. This is a size 15 barbless Tiemco. 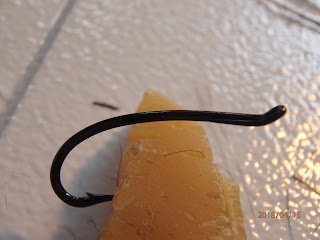 Alec Jackson "irons" hook in 7 1x short 1x heavy. I think these are perfect for early streamers that I won't have to weight.

Nice hooks. I'm using them for trout but I understand one needs to be careful debarbing them (if one does) for steelhead and salmon as the debarbing can stress the hook at the barb and weaken it.

A buddy who now uses "debarbing" pliars and is a steelhead junky says he's never broken one since become aware that his water-pump-pliers method of smashing the barb was stressing the tip. Good to know. 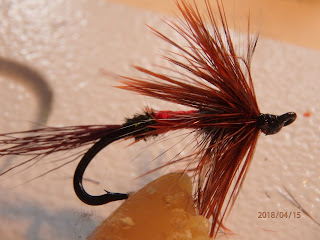 I think this is a good search streamer for holes, banks, and timber given the seasonal set-back in the fishing calendar.

I can easily be both stupid and wrong. I'm a rank amateur, remember. Always consult your local commercial fisherman for advice 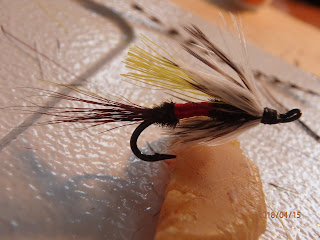 A more traditional coachman streamer tied with a flag of dyed bucktail tied-in under and behind the dual hackles.

I'm using raspberry dyed coastal deer hair for the tails on this series. Seems to fit the "dark, early" intent as well.

Why the yellow bucktail?

Attractor-style streamer. I'm attracted to it.

I'm learning to master the materials. Some ways to go. 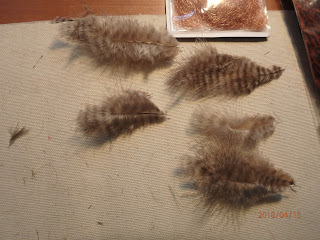 At left, mating some barred maribou for the micro-streamers in neutral colors.


I need to tie up some of Steve's scuplin patterns this week as well. Big soft-hackle heads making the sculpin wake as drawn along the bottom on a tight line could save the day.


There are some fish on the other side of the gloom. Let's be ready for them.

Email ThisBlogThis!Share to TwitterShare to FacebookShare to Pinterest
Labels: Flies, The box