And It's On: Opener 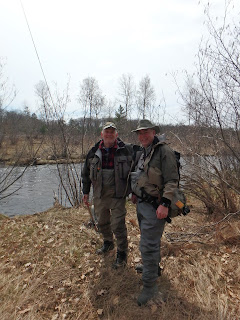 Jim and I on the Black River. Photo courtesy a very nice spin fisherwoman: Mikalea.  We sent her to the Fly Girls for conversion to a hobby that will take all her money and time.

Jim and I have tied flies together on Monday nights for the last three years.

We camped through a full gale at Town Corner Campground and had a great day on the water.

SO, a shut out. Not even a strike at a streamer. 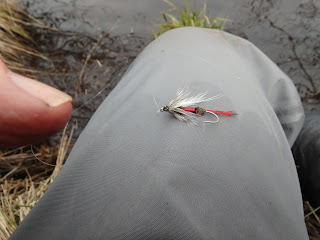 One of many streamers tried.

The night before opener dipped to 25 or below. Coldest it has been in weeks. I was out adjusting lines at 2:30 in the morning and my breath turned to ice crystals instead of fog vapor. It was plenty cold (I slept in my 0 degree Marmot bag. Jim had a summer bag and a 10 lb Hudson Bay wool blanket. We were both fine.)

We felt bad about not managing a single brookie.

Then, opener evening we broke camp and went to a party for "commercial fishermen" hosted by a fly shop owner we know. Great time. Fisheries folk. Guides. Gear reps. It was awesome. Jim and I were the only non-industry forks there besides our host's husband.

We decided on the way down to just admit we were blanked. After all, we're in this for the hobby.

Turns out, no one else had a fish either. Made me feel better. Some of the folks there couldn't get on the water because of blown-out streams or -- in one case -- a horrible case of "wrong turn" due to faulty memory. It happens to us all.

So, sometimes the pros have trouble. I might have thought it was just an off day for part of the group but when a guide I now who can catch fish in the puddles of the parking lot on the way to the river was blanked, I feel better.

Fish at my feet.

Brook trout on the Black can be spooky. I decided to stand motionless in one particularly good spot for most of an hour to see if anything would come on and hatch figuring that my immobile stance world give me an idea if my clumsy wading, staff tip on cobble, shadow, or just general movement might be the culprit keeping fish down.

Fish did show up in three-and-a-half feet of gin clear water swimming upstream past my feet. No interest in my nymphs, flymphs, soft-hackles, or the assortment of streamers tried later in the day.

It was great to be out. It wasn't so great to have one of those days where nothing in my arsenal seemed to be the right bit. At least I can be sure that better fishermen than I suffered similar fates and I didn't get the "you shouda tried an orange bean pock ... they were taking 'em like crazy!" story.

Next up: New York and the Catskills next week.

Warmer water promises different outcomes. Those streams are also blown out and prone to overcrowding but being brook trout guys, our outing group are willing to hike away from crowds up into headwaters.