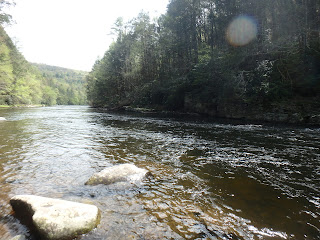 AT left, a picture from the Neversink well inside the Unique Area looking down on the river itself. In this picture, flows are three times normal as measured at an upstream gauging station. The debris from a couple weeks ago is another six feet up the banks! That must have been something to see.

I took a fish out of the slick in the bottom right corner.

The water had a slight cast -- green, Jim says -- but visibility exceeded 20 feet. I had the head of a Wulff TT line out plumbing the depths off a rock ledge and I could see my bead-head PTN flymph just ticking the bottom rocks as the color transition on the line denoting the head was in my hand. 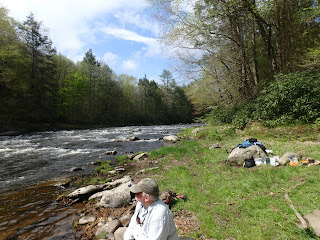 Our lunch spot. Jim in foreground. Riffled break goes up around the bend. A long slick is a my back.

We've hiked in about an hour mostly downhill to reach this spot.  The day began with light rain and a cold drizzle and became this warm spring day with full sun. It topped 70 by the time we hiked out.

We were supposed to have storms but none materialized. We could hear thunder in the north as we hiked out. 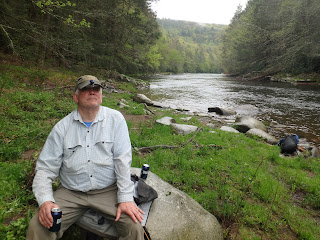 The downstream lunch view. Halfway down a brook emerges from behind Jim.

The humidity was up: tropical, even.  The river valley was set to "coastal".

Black flies are not deer flies and the bites are  in the "discomfort" range. Deer flies are far worse. 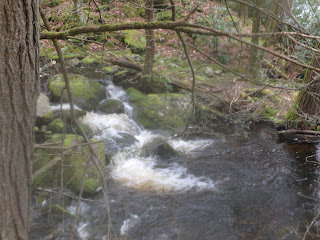 The small brook in its last pool before tumbling to the Neversink.

It is water very much like Alan fishes on Small Stream Reflections in the right sidebar. The little fellow ran full but the very steep plunges seemed to dissuade the brookies.

I tried a Wulff in size 18 here. Nothing rose. My suspicion is that my over zealous approach put the fish down. Has to be one in there. 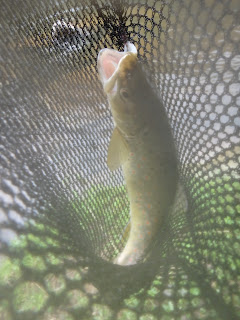 This lovely fellow in the 16" - 18"  class (net holds a 21" when stretched so I have a good comparison)  came from the foot of the flow where the brook (above) runs into the Neversink.

This was a very quick in-net photo and the lens is slightly fogged from being in my shirt pocket in this very high humidity.  I'm standing one foot in the brook looking out to the river.

He lacked girth but was long like a cat stretched out on your leg. I frequently encounter cat-on-leg so it comes to mind readily.

He took a partridge-and-yellow in size 12, wire wrapped with a piece of .20 non-lead tied-in along the shank. It sank well and I had to guide it downstream about sixty feet from where I could stand in the brook in order to clear some car-sized submerged rocks.

The fight to get him to my net was as exciting as I've had in years. Current, strong fish, rocks. My heart was pounding and my smile hurt my cheeks. 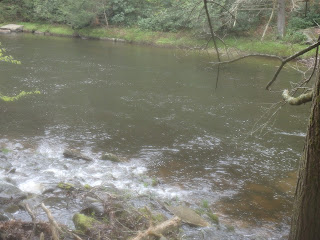 The emergence point of the small brook featured above. That current tongue on the right which meets a poorly illustrated lateral seam from the Neversink proper was just where I caught the trout.

I took my  snapshot, declared my prize, and moved on to let Jim have a shot at what clearly was a wonderfully fish-y spot. 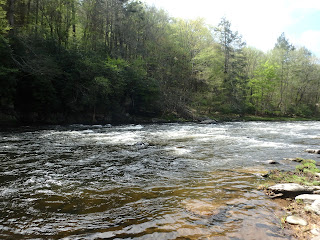 The lunch spot riffle-run. The high water and fast current induced standing waves I don't suspect are standard on the Neversink. 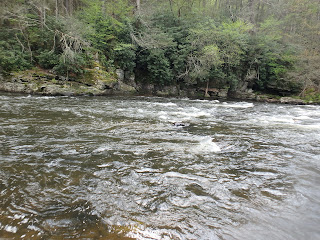 A line of riffles from submerged rocks running across to the rock bluff just coming into view on the far left of the frame. It is much prettier in person than the flattened perspective of a snapshot allows.

The seam 1/3 the way across the river held a deep pool and it yielded a nice trout. 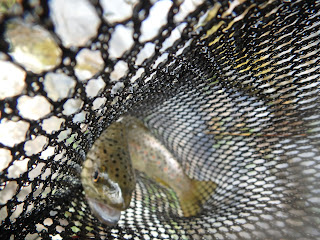 An 8" - 10" class trout from the bottom of a Neversink pool. Lovely coloration on this guy. He received a quick lift -- tail still in the stream -- for the snap.

I like this method of photographing fish as he was exposed to air for less than a five-count. It isn't the best fish picture in the world but we've all seen fish and he could use a break.

I've enough "grip-and-gin" for a lifetime.

He's kinda cute in this one.


I fished a Hardy 8' 4wt Zephrus with a Douglas 3" Argus reel and a Wulff TT line in 4.  The high water really made the aggressive roll cast the means of fishing. The 4wt was fine for the day.

The Neversink in the Unique Area is really good cane water. The early drizzle and the threat of storms made me bring plastic. I have a nice 8' 4/5 Steffen Bros. fiberglass blank laid up by Mark McKellip but I grabbed the Hardy because I wanted to see how it did with dry-fly in the field. New rod from the winter purchases.

Alas, we saw a half-dozen risers but couldn't reach across the river to get to them. My 6wt Winston Boron III Plus I used on the Beaverkill would have allowed me to make the presentation but I suspect -- correctly -- the rod to be overkill for the standard trout in narrow confines.

A four weight gave me thrills on the large fish and enjoyment with the smaller. Lots of bugs off the water; but, little surface action.

I tried the litany of soft hackles -- some dressed to the film, others in the top 8" or so and a few lightly weighted with wire wraps for the top 18"-24". Nothing.

I lost several fish on long lines fishing deep swings with weighted black, orange, and a couple snipe and purple soft-hackle flymphs tied with tungsten beads in #14 and #16. I used a long-line nymphing technique (no bobber) and a long leader greased at the junction with the fly line. I could hook-up using the barbless ties even in strong currents with a lot of line.  I only brought one of these to hand however.

The fish in the net above took a cdc caddis in grey drowned by a current tongue and carried nearly across the bottom of a pool. I could see the flash of the take.

The current was too high for wading as pictured.  We fished from the banks and a few rock-hops. 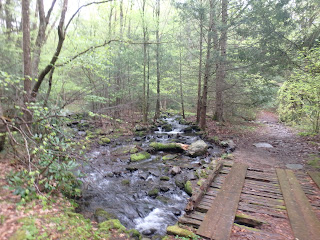 From the hike through the forest.

The Neversink Unique Area is well worth the hike. It's easy to find a day's worth of water and we saw no other anglers. A mile on foot seems to be the measure that sorts the crowds.

In the increasingly crowd-fished Catskills, the Neversink offers the isolated adventure one needs.