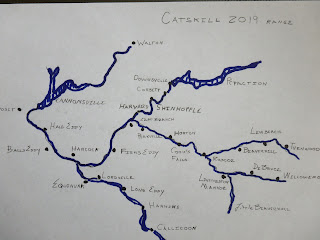 The core of my Catskill trip revolved around "the five" : west and east branches of the Delaware, the Beaverkill, the Willowemoc, and the Neversink.

These five constitute a career's worth of water. If one were to fish no other streams, there would be enough here for fifty years and a dozen styles of fishing from wispy two-weight dry fly midges on tiny brooks to true Spey-style swings for deep-holding large trout across massive waters.

Our style of dry fly fishing here east of the Mississippi originated in flies inspired by those sent by Frederic Halford to Theodore Gordon. Gordon slightly altered the appearance of some patterns to more closely resemble those of insects hatching in the Catskill system illustrated at left and thus began the "Catskill-style" fly fishing of surface dries.

Certainly there were independent origins of dry fly development and the products likely evolved into the synthesis of what we consider now; but, the spiritual heart of the dry fly emerged and was re-enforced by the presence of  writers and their east coast readership who had the means and leisure to pursue fly fishing in this region. Other factors for fame include the introduction of brown and rainbow trout into brook trout fisheries decimated by deforestation and over-fishing.

Today I want to speak of the classic pools of the Beaverkill. My hand drawn map at the above is an inexact approximation; but, as you look at it, we're dealing with the section in the middle from East Branch upstream on the Beaverkill to Roscoe where the Beaverkill is joined by the Willowemoc  adding a considerable amount of water to the flow.

The famous pools begin inside the town of Roscoe on its southwest side with Junction Pool. The river and its pools are paralleled by Old Highway 17 throughout this length which makes the park-and-fish angler its principal population but for a couple of locations.

New Highway 17 (4-lane divided highway) is seldom out of sight and less out of earshot. There is little illusion of fly fishing classic waters from the early 1900's in the presence of singing tires and jake brakes from tractor-trailer rigs slowing on curves.

The pools are easy to find for they all bare large signs. Here is Junction Pool's: 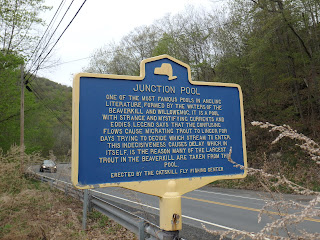 We're in town at Roscoe.  I'm standing on a bridge abutment. There is a smallish parking lot here with room for half-a-dozen cars. The Roscoe Motel is across the road just behind me and to the right. 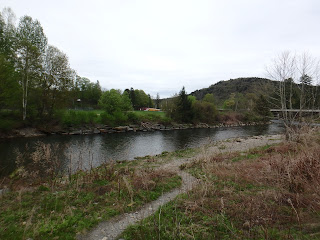 And, the pool. That's new Route 17 in the background. There is some sort of light industrial building across the river separated from the bank by a large chain-link style fence. The rip-rap on the bank is natural stone but still appears to be dumped by a highway department probably after the erosion caused by the massive flood of 2006.

Anglers fish this stretch rod to rod standing on the shallow inside from where my picture is staged and casting to the channel passing by the far bank. Only one angler was fishing when we arrived -- a rare occurrence -- but the whole place had the air of "fish harvest." All that was missing was a large salmon trap floating against the bank with its arms slowly turning to the cadence of  the harvesting march. (Sounds a bit like Panzerleid to me).

The aroma of combat fishing hung too strongly in the air. We passed and moved along. 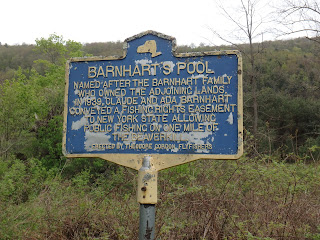 The pools on the Beaverkill are close together and flow one into another. Below the Junction Pool is Ferdon's Pool named for the Ferdon family. Oddly, it is this pool where the first Hendrickson fly was tied by a guide named Roy Steenrod for the famous Mr. Hendrickson for whom the Hendrickson Pool is named. All very confusing, I'll admit.

Below the Ferdon's Pool is Barnhart's pool. Sign at left. Pool pictured below. 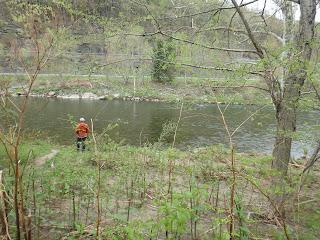 That's Neall from the Painted Trout on the bank. My other pictures turned out poorly. It's a  pool of water  reached by a hike of a quarter mile or so across flat -- and sometimes a little muddy -- meadow. There is room for four or five anglers here if they know one another. 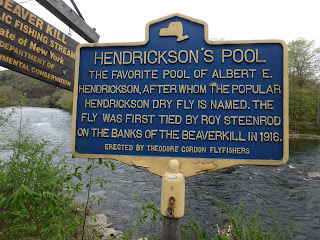 The Famous Hendrickson Pool. I took a couple fish here. The rocks are brutal. B.R.U.T.A.L.

I'd say you must have a staff here. The current was assertive but the footing was treacherous with rocks distributed across the bottom ranging from basketball to ottoman sized. And ... they move.

I twisted an ankle bad enough I'm still limping here a week later. I just taped it up at fish camp and continued fishing. You might be a strong wader and able to avoid trouble. I didn't. The folks that fished this water one hundred years ago must have been tough. 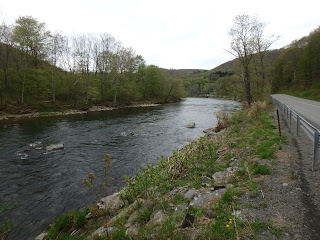 Hendrickson's Pool above on the far left side of the snap as we look down the long flow and the bend toward Horse Brook Run named for Horse Brook which enters halfway down from the right side of the frame. That is old RTE 17 running down the right. The bank is thirty feet of rip-rap and is steep. 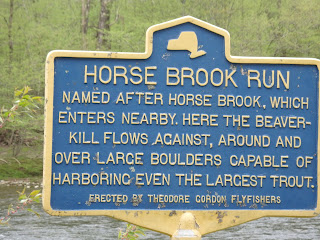 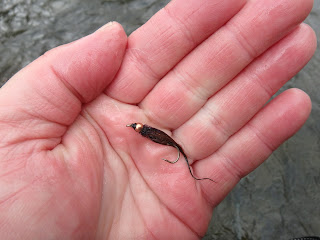 Beadhead flymph of the type I used to take my two trout in two hours from Hendrickson's. The body of these is a black or root beer dubbing spun in a loop to form a thorax, a hen pheasant tail, and a substantial dark hackle below the bead. The fly is a size 10  1 xl. I lost many in the pinch-points between the irregular rocks. I did however take fish.  No one else did.

I asked the trout. They wouldn't talk. Probably knew I was a softie and was going to be quick returning them to the stream.

There are a number of successive pools one after another denoted with signs and located right along the old highway. 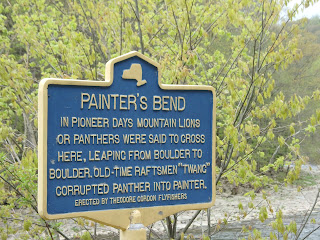 We stopped and fished after passing the other pools all of which were occupied by anglers in early afternoon. Painter's Bend just above Cooks Falls presented a nice flow and a nice rainbow for my fishing partner Jim Page. 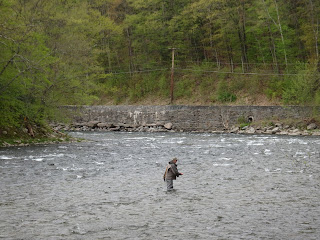 Wading was much better here. The depth across the pool is mid-thigh with a few slightly deeper slots. Jim is on a cobble tongue so is in a little less water.

The current was stiff but the low depth made it fine to fish. I swung everything in the arsenal a little upstream from here and found nothing. From the riffles below Jim is a section of more than a mile of pocket water. When it is warmer, I'll go back to pick these pools at dusk. My ankle was tender so a great deal of movement in the stream was not high on my list of activities when this snap was taken. I was pretty much just "icing" it in very cool water and practicing my single-handed Spey technique.

I fished a Winston BIII Plus saltwater rod in 9' 6 wt here on the Beaverkill and that was about right. I used a Cascapedia rigged with OPST running line, heads, and tips. With the current, a fourteen inch trout  put up a solid fight with fifty feet of line out up at Hendrickson's Pool. Here at Painter's, I didn't think a four weight had enough for control.

A conventional nine foot five was probably right but I wanted to use the Winston.

The panorama of Painter's gives some idea of the course of water. There is a great deal of it here and a party of five or six could easily fish without being in each other's way providing again that they know each other.

In a day,  we stopped at five pools; drove past a half-dozen more occupied by anglers; and enjoyed the river immensely. This little section of the "upper no-kill" on the map could take an entire season to learn to fish. There are a great many anglers in the Catskills. There is water to hold them. 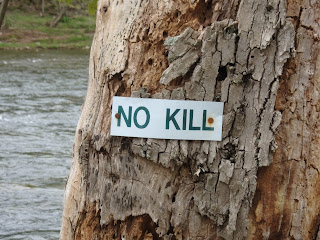 If you are curious, I recommend Fly Fishing the Beaverkill  by Eric Peper and Gary LaFontaine (The Lyons Press. Guilford, Connecticut. 1999).  This slim book prepared my crew well for the Beaverkill and the famous pools including bits of the area's history and the naming sources.

Our crew which included two guides and a North American manager for a major fly fishing gear manufacturer struggled at times.  Our party had over 250 years of fly fishing time and still the fish were a little tight-lipped. I felt fortunate to get two fish this day. The professionals were blanked -- different water, though.

The fishery is changing. Guide boats have exploded in the past ten years. At one point, we counted nine boats in a line on a stretch of the Delaware. I heard a story of nineteen trailers at a take-out.

Now, I'm not too anxious to pay $400 to follow another boat all day pool to pool. YMMV.

There are no boats on the famous stretch of the Beaverkill. At lest, there are no boats that would last a season or that wouldn't have to be pulled over humps in the case of rafts. This is wade fishing territory and the better for it.

The fish in the pools I covered above see a great many flies.

Like the Au Sable here in Michigan, fish are moving more and more towards nocturnal feeding. They've had dries, bobber-nymphs, and bank-pounding streamers thrown at them. They're responding.

Three fish  constitute a fine day on most of this famous water. A decade ago, you'd expect three in an hour. I've never been much of a numbers guy. I like to catch fish but am content with any fish for my effort.  Considering I was sight fishing new water, I'm more than happy with a couple of fish taken in spring from the bottom third of the water column.

I saw a handful of splashy rises, surmised subsurface feeding based on rise form, and pursued. My sot hackle efforts in the top third produced nothing. Jim took a ainbow on a nice soft-hackle hare's ear flymph.

You pays your money. You takes your chance.