The Stuff of Pipe Dreams 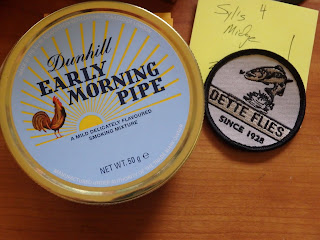 At left, some Dunhill from my cellar from 2007. Also, a lovely fly patch from Dette Flies that'd I'll never sew onto anything because I'm not a boy scout.

Dunhill has gone out and there's some scrambling now a couple years later. Think Pearsall's for pipe guys. That tin -- aged as it is -- runs somewhere between $100 and $150 in the closet market. It was $8 or so new.

Not my brand but I had a couple tins put aide in case it became my brand. I also keep around some "guest" mixtures.

I'm giving the tin to a guy this week who has invited me to fish water that I'd otherwise not be able to access. I feel odd about that. I'd like to go to his trout club and fish country-club fish and have a nice steak and scotch after dusk. Still feels a little off.

I'm not much of a club guy. Don't want to be in any club that would let the likes of me on premise.  Means there might be more like me around those parts. (shudder).

Anyway, Dirk likes this brand as he's a "soft English mix" sort of fellow -- which is fine. He's not swallowed nearly as much gasoline as I have. His taste buds probably still work. Mine are moving right up into the "Haddo's Delight" range. 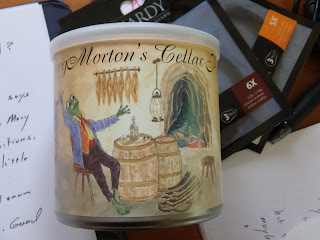 At left, a large tin of Frog Morton's Cellar from another defunct producer: McClelland's in Kansas City.

This one has whiskey barrel stave cubes packed in with the  tobacco. Im not a "topping" or "casing" guy but Frog Morton's is a bit of a treat.

It is aging until the doctor tells me it's okay to smoke it: it won't matter that much one way or another and you might as well die happy.

I had to buy some 12' tapered leaders this week. Gin clear water, slow glassy stream, wary trout. That's the norm where I am going so it'll be a lot of casting from my knees to sighted spooky fish. My 12' leader hand ties are not so good. My albright knots kink when they shouldn't on the light stuff. I'll have to work that out.

So, I bought the Hardy. These are nice leaders and I used them on the Gibbon last year.

I don't have any tweed for the club.

Dog ate a ham sandwich out of the jacket pocket when I'd worn the gillie jacket bird hunting. Hmm. I've lost more than one article of clothing to the combination of dog and forgotten ham sandwich. Must be a pattern. I wonder if anyone makes a dog-proof jacket? Hmm.

Also, the yard guys mowed a nearly new Korker's boot that was drying alongside the drive: 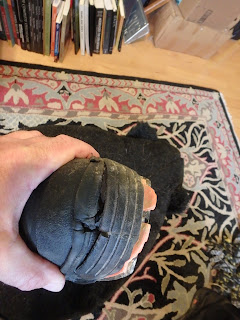 Royal PIA. I wish I had the strength to split the toe of a wading boot.

Off to do some damage elsewhere myself.

We're in the golden age of fly fishing gear. This luxurious state of  every piece of gear we'd want in five different color varieties isn't going to last. They'll be a grand shortage of great gear here in a bit. We'll all have to go back to cruising garage sales.

Look what has happened to the pipe guys.