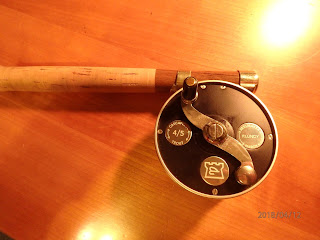 At left, a purchase from a winter ago: The Hardy Cascapedia in the 4/5 trout size. I'm torn as to which fishing buddy to leave it to because without a doubt, there'll be a knife fight in the attorney's parking lot over the thing.

I got to meet John Shaner this spring who is the East Coast "Mr. Hardy" among other things. I'm told he had a hand in the re-emergence of this wonderful piece of gear.

He's a super guy and has an encyclopedic knowledge of wet flies, the origins of the North American dry fly tradition, and and and. Besides this, he's a super guy you'd want to introduce to your sister.

I got a bit of stage fright in meeting him.

I fed him and our crew dinner -- a special special Italian affair with great wines (Thanks Scott!) and meatballs someone dear to me taught me to make -- but except for "Hello, glad to meet you" I couldn't bring myself to ask him to sign my old copy of Bergman's Trout.

It goes back to meeting Buck Buchanan in the day (NFL HOF 1990). He died at age 51 of lung cancer. When I met him as a kid, he was the largest man I'd ever seen. I thought he was a giant. I'd watched him on television with my dad and here he was shaking my hand. All I could do was stammer.

I had a date with a girl once who was so beautiful I couldn't talk to her. My only hope was to talk at her while focusing on the foreign businessman and his wife over at the table behind her. The fellow probably thought I was gay the way I kept staring at him. Every time I looked at her, I lost my voice.

Luckily I covered my embarrassment in alcohol because that always helps, right?

With Shaner, I covered it by vicodin and an early trip to bed while everyone else ate and talked. I didn't even get into the dining room. I twisted my ankle the day before and the bastard had swollen to the size of a softball while pounding like it was on an anvil. I wasn't good company.

I'm the king of pissed-away opportunities.

So, the Cascapedia is delightful. It's spooled with OPST Lazar line and I left room to handle a whole fly line in 4/5. I'm going with a Rio LT in DT 4 wt.

Yes, at 6+ ounces someone will say "isn't that heavy?"  The difference between the Cascapedia and a Galvan Torque is about two ounces. That's a couple slices of ham. I'm not going to feel the difference.

I'd say I'm not casting postage-scale light rods but that isn't true. I've an 8' WInston BIIIx in 4 wt and a Hardy Zephrus 8' 4wt  both that are in that light class.  I know 8'6" is the better length in both rods; but, I live in Michigan and 8' is just fine. I prefer the McKellip M84 8' cane but it rains here and one must make concessions.

You don't have a problem with cane in the rain? Good on you. I have and I do.

Anyway, I bought this reel something more than a year ago and have been using it for single-handed Spey work and some double-handed on a 3 wt Echo 10' 6" 3 wt. It's loaded with OPST Lazar line and backing. The thing is large. I've left enough room to make a loop-to-loop for the LT DT from Rio in 4 wt.

In sorting some boxes, I've segregated some flies from the collection for this coming weekend on the Au Sable and Manistee both of which are unseasonably -- and uncomfortably -- high. 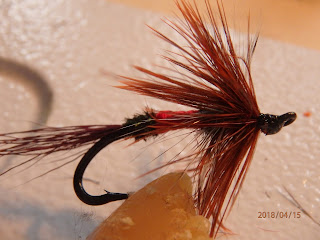 Big coachman-style streamer with a double hackle head inspired by the low-water spey flies Steve at The Soft-Hackle Journal ties. Mine aren't as clean or neat; but, the big hydraulic wake of the twin hackles does something special on 12" strips and BOOM trout take 'em.  Size 7  Alec Jackson irons hook here. 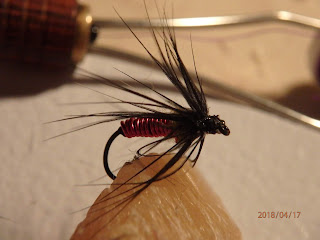 A nice red-assed inspired wire wrapped soft-hackle that does well in finding the underwater soft seam below faster surface current.  Fish lying in that gravel channel under the flow take this beast with gusto which is good because I often have enough slack in my system on the take that I need the assist. 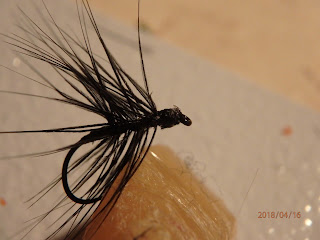 Black and palmered in a wide-gap #14. Always helpful in softer water when things are still a bit higher and faster than usual.

I'm making the run to do a "dry camp" up on the Manistee at the ruins of Deward.

The river is small there and high water won't hurt the brookies. I'll swing a hammock (Hennessy - now a 20 year old beast good as the first day new) and use a Ranger stove from the Solo Stove people as my portable fire pit. It's a lightweight camp confined by distance-from-road restrictions.

Hey, we all want to enjoy the unspoiled wilderness so some camping restrictions are in order.

Hope summer smiles on you. It was a long time getting here.