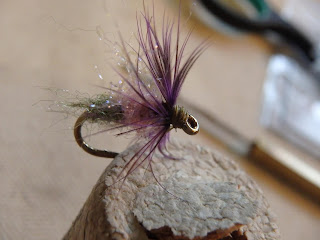 AT left, my Pink Squirrel. As my wife reminds me, I am completely colorblind and she asks: "is it supposed to be a purple squirrel?" The Ice Dub bag said "pink."

Going to the Driftless here in a week with some novice and some not novice fly fishermen. It's a mixed bag.

We'll be artificial but a couple of the guys are clearly more about "fishing trip" than "fly fishing trip" which is fine. I'm the fellow with the maps and research.

I'll let the spin fisherman fend for themselves. Anybody can find the Timber Coulee. They'll be fine. 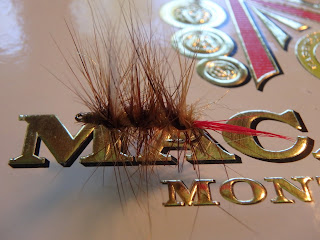 My Ausable Bomber at left. The calf hair shows poorly against the white of the cigar box. The tail is waxed red-dyed hen. Probably should trim this one so it doesn't wrap the hook. 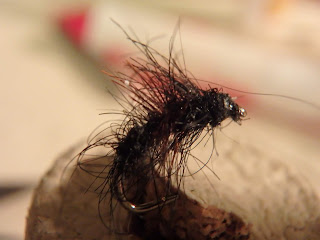 My angora ant at left. i've thought a great deal about ants over the last couple years. This is what I have settled on for use. I try to segment the bodies a bit more but noticed: the trout didn't care.

I like this better than the ants with the bare abdomens and the single wrap of hackle in the middle. This guy has a hackle wrap in middle the but there is a bit of scissor work and comb-out on the end product. When wet, the stiff middle hackle does its job. 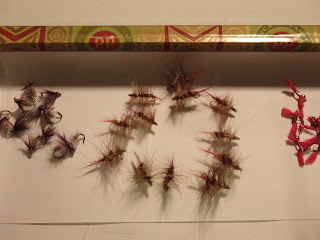 Cigar box of some of the tie-ups. Left: squirrel; middle: bomber; right .... the San Juan worm.

I think that selection works for an afternoon. Add in some Adams and Syl's Midges and we're good for a day.

I'll use a partridge and orange and a pheasant and herl.