My Upstream Presentation of Soft-Hackled Flies 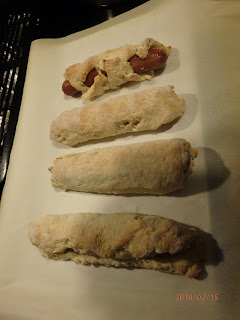 I've caught a little "amber liquid" flack over the Baked Goods Illustrated segment of this blog. Seems the latest photos imply a degree of haughty achievement full of airs and illusion far outside the realm of normal Amber Liquid fare.

At left, this week's installment. I was off the leash while Beargirl was gone and indulged in forbidden food. In this case: pigs in a blanket.

Hebrew National dogs in a light biscuit dough. They were delightfully in the amber liquid wheelhouse.

No Bisquick here. That stuff tastes like Play-Doh. Yes, I know what Play-Doh tastes like. Doesn't everyone?


My Modern Wet Fly Code  would read: upstream, to a rising trout, from the river, with a soft-hackled wet.

Sound familiar? Yes, it is very much the pattern of upstream dry-fly. I'll outline below my upstream presentation tactics. Please, feel free to suggest where I might have gone awry. I catch fish using these techniques. Unlike Datus Proper, no trout I've asked has offered any sort of comment on my approach.

Soft-hackled flies are killers. However, there is a perception that they are swung down-and-across in an attention-absent manner suitable for the very young and very old. I say bullshit. These flies are best when actively fished. The upstream presentation is a good example.

The great WC Stewart of The Practical Angler fished his soft-hackles upstream with great success and he was surely a meat hunter: he paid his bills with his freshwater catch.

There's great sport in the soft-hackled fly. It takes a change of mindset to find it initially; but, once realized then all manner of technique is open to the angler. All it takes is a little nudge.

This little piece might be that nudge for someone.

A word on fly selection for the upstream scenario: I outline below a scenario in terms much as I fish a dry fly to a feeding trout. I fish soft hackles shallow in the same manner. To sighted feeding fish, I'm fishing so near the surface that I'm watching the take.

If I've no sighted fish and I'm fishing to habitat, I'm usually fishing deeper in the water column and I'm watching line and tippet for evidence of takes just as if freestyle nymphing in Colorado.

I do cheat and tie-in a piece of hi-vis Stren into the leaders I use for fishing deep in the water column when fishing early in the season. I haven't the ingrained ability to be able to pick up the gear on the first outing and manage subsurface takes with any great skill. Come July, I'm fine and can hook-up on the slightest twist. In March and April, I'm slow to see and slow to take up slack on a strike. A little more leader visibility helps me "re-tune" the lizard-brain so I don't have to think then react. I'll just be able to react.

Another cheat? A duo rig. Even deeply subsurface, the upstream approach outlined below is essentially the same when fishing a buoyant indicator fly over a spider. Just open your casting loop which for the majority of recreational anglers isn't a concern at all. 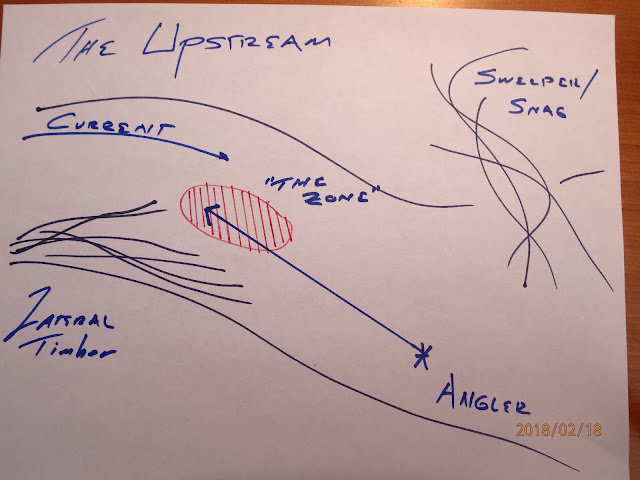 Above: a quick illustration of a scenario.

I'm fishing upstream and have approached after thoroughly working the snag at the upper right of the picture. Edging across the current I see rising fish nearly mid-stream. I see feeding trout. If I'm fortunate, I see a large solitary trout who otherwise lives under the sweeper/snag pool but who is out on the town for a quick feed.

I'll say that there are several holding lies in this illustration. There's probably a nice cutbank in the bank's swale upstream of the sweeper/snag. There could well be a nice hole or gouge where I've shown the angler due to past high-water flows that washed out a soft bit of sand bottom during the spring spates. The current would shift at normal flows and I've seen trout holding in the deeper water especially when the bottom is black with mud or organic detritus.

No, here I see the riseforms from trout picking off bits from the bubble seam given by the tips of the mostly lateral timber or from the break of the current in its swing. I've labeled the area as "The Zone."

My bank is steep and alder-filled or otherwise undesirable as a platform. Frequently, some sort of draping limbs obstruct a backcast. It's Michigan.

I'm cutting the distance. I advance a half-step at a time. Small steps mean less wake, and less toe-force in the forward movement should I inadvertently strike a submerged boulder. To the trout, kicking rocks in wading boots makes a sound remarkably like the drum line of the Phantom Regiment. Not helpful.

I approach based on water depth. At waist deep, I crowd 20'. Maybe a little closer if I can sneak up to the tail of the lateral timber. Shallower water knee to mid-thigh depths I stand back to 30'.  I sometimes kneel if I have a shallow tailing bar. I don't need the leverage for a long cast so I minimize my form anticipating something going wrong.

Surface/near-surface observed feeding means a long tippet. In early summer, I frequently use 3' to 4'  of 4x on the end of a leader then 3' of 5x or 6x.  Fly size and whim determines my terminal tippet. A size 11 jingler gets the more aggressive tippet. A size 17 partridge-and-orange gets the 6x. I should also say that I hand-tie my leaders to turn over duo rigs. My leaders are a little stiffer so tapering the tippet helps.

I pick the most downstream fish. I watch. I'm looking for patterns. Do they stray towards the lateral timber indicating some sort of nervous pattern? Are they "hogging" in mid-stream slashing at anything alive? Can I pick out the rise timing of individual fish? Are there bubbles from open-mouth surface feeding or are they bulges of a porpoising feed subsurface? I observe.

I can always change my fly before the cast is made.

I look nearby. Several times I've found a larger fish subtly feeding nearby while the smaller fish make a commotion in mid-stream. My best was spotting a nice brown feeding just outside the overhanging grass of a cutbank while smaller fish fed as a pod pretty much where I've shown "the zone" in the illustration above.

It only takes a couple minutes to look carefully.

The curve cast [Pete Kutzer demonstrating here] -- a laterally overpowered cast which curves the end of the leader and fly one way or another -- is perfect here. I rarely use it. Fancy casts amid structures and obstructions tossed in with the pressure of a sighted fish often means bad things. Remember, I'm not a commercial fisherman (e.g. guide, fly shop owner, outdoor writer, factory rep, pro-staff member). I'm working on being the occasional angler. Simple. Reliable. Repeatable. This is the mantra of success.

Your golf pro would say "play within yourself."

I deposit the soft-hackle upstream and to one side of my sighted fish. I anticipate the current providing a little cross-current drift (3" - 4") based on strength of flow and I use this to move the fly into my quarry's feeding zone. So, I'm casting 9" - 16" to the left bank side of my sighted fish. I'm dropping-in something like 2' - 3' upstream of the fish. I've made a choice. I'm letting the fish hit the fly on the drift. I want him to see, target, and take.

I'll use a side-arm cast place the fly over a clear area judging the distance. Then, with my estimation complete I make the terminal cast.

If I've no place to prep the terminal cast, I'll use a roll-cast with my attention to the travel of my rod-tip. I execute a perry-poke with a short pile of line in front of me, aggressively build a "D" loop,  and cast forward to a hard stop a little higher in the motion than I first think necessary. My rod tip has no arc. None. (ed. - dual fly rigs need a little arc to open the loop and avoid tangles. I get excited and  omit this arc in pressure situations and tangle on the cast. Don't be like me.).

Having the line, leader, and fly straighten in the air and fall 1'-2' to the water with a little rebound slack is better than rolling across the water over the fish driving the fly into the surface with a "plop." Always better to "alight" on the water than pound and splash under pressure.

A little rebound induces natural leader slack and that helps the fly's initial drift, too. It lands and often spins a little frequently drawing a strike from other than the targeted fish. That sort of problem isn't  a bad one to have.

The drift is short. I'm covering at most one-third the distance of the cast. The fly is well in front of me when I decide to recast. I use a clean roll-cast pick-up to "snip" the fly off the water.

If I'm pressed for room and limited to roll-cast only I'll downcast the now aerialized line so that the fly is one rod length ahead and to my right.  I'll snap another roll-cast to a targeted fish. This is a single-handed spey technique.

Sometimes, I just reset and try the whole routine from speed zero rather than going cast-to-fish-to-cast. There's no harm in resetting. Too many anglers ruin things in haste.

The Set and Play:

I can lift my whole arm 3" for a set or (preferred)  use a strip set from my line hand. What I don't want to do is raise my rod arm in managing line then attempt a set with my wrist striking with a rod-tip lift.

I don't want to end up with a strike at the end of a short managed drift with my rod arm raised as if I'm holding the leash on a giraffe. I've no control then. I'm "wrong footed" and cannot play a trout from that starting position.

I say this because I have seen anglers in such an awkward position.

My approach outlined here is overly exhaustive. I wanted to outline exactly what my upstream process involves so that anglers who only know the down-and-across swing have some idea of what approach might work. I catch fish in the manner described.

Upstream to feeding fish represents a great deal of fun. Upstream to habitat and pulling fish up to the surface is also great fun.

Fishing upstream in the bottom one-third of the water column is every bit as technical as freestyle nymphing. Yes, the fish do sometimes hook themselves. Far more often they'll spit the hook before you see the take unless your nymphing skills are strong. I don't recommend upstream dredging for trout, at first.

Upstream soft-hackle is one of the most enjoyable means of fishing water in small to mid-sized rivers. When the hatch season begins, it can be a deadly approach.

Hopefully, it leads to a double-digit trout day. It has for me.