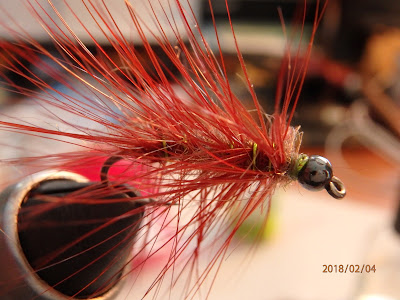 Above: a ginger-palmered soft-hackle fly as a variation on the theme of the Stewart Spider. This fly is tied on a #8 curved-shank streamer hook from Unpqua. That's a tungsten bead-head.  It's a quite a departure from the #16 thread-bodied soft hackle (shown below #16 purple-and-grouse in a micro-wire wrapped body). 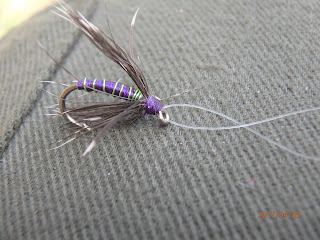 The large bead-head fly is fished as any other soft-hackle might be. Odd enough given its substantial departure from the wonderful classic bits outlined in Robert Smith's wonderful The North Country Fly.

My underlying premise is that soft-hackle flies are the foremost expression of pragmatic fly design and their manner of presentation is itself an expression of the same pragmatism.

The soft-hackle anglers pursue what works without dogma or restraint. If it works, it becomes part of the general codex. It's passed along. It's taught. It's imitated.

If the soft-hackle angler has a motto, it is this: curb your dogma.

Irreverent? Sure. Successful? You betcha!

A minor digression for the Baked Goods Illustrated crowd.

Scones this morning. A maple-pecan praline scone. There should be a decadent sticky glaze on these but here at Bear Central, we eat them without embellishment alongside strong coffee. We're not much on the over-sweet in this house.  This batch came out light but satisfyingly rich in flavor. I added a touch of nutmeg and the toasted pecans took to it quite nicely. 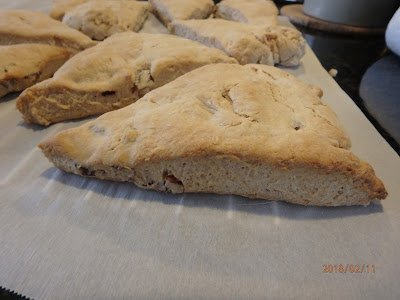 Back to fishing: Soft-Hackle Presentations

All of fly fishing is divided into two parts. We fish to trout or more frequently we fish to habitat.

I'd love to assert that I do most of my fishing upstream to rising trout just in that twilight of a quickly-cooling summer's evening. I'm doing well to encounter these magical conditions three or four times a year.

I live in a world of conflicting priorities: a spouse, a mortgage, the day job, the night gig, the love of a trout stream. I get out when I can get out and my rivers are three to four hours away. Like most of you, I fish when I can fish regardless of the hatch, the trout's state of mind, or the weather.

I spend the majority of my time fishing to where feeding trout "ought to be": habitat.

There's a distinction here of note. I fish to feeding fish.

My entire approach is based on the premise that I will hook more feeding fish than I will hook from territoriality, aggression response, or  whatever else motivates a trout to jaw a fly when it isn't hungry. Those too are valid approaches. They simply are not my approach.

The techniques I employ target equally a pod of feeding fish or the locations I believe should harbor a pod of feeding fish. I'll change my fly in reference to what I observe. I'll frequently sit on a piece of timber, light my pipe, and glass the water ahead and behind me both looking for clues as to what is going on below the surface.

I fish soft hackles as I fish dries, nymphs, or streamers. I'll vary the approach based on conditions and regrettably, most of the time that means the physical condition of the river and where I might be able to stand to cover a bit of water. I've a lot of timber, bramble, and swift current to consider.

I'm making short casts following a gentle and silent approach from downstream. Short casts Normally means twenty to thirty feet. This is my favorite approach when I have a chance to fish to a feeding trout. I use it plenty on fishing to habitat but I love watching the take from a feeding trout at close range.

The fly never drifts downstream of me.

The Up and Across

I'm fishing the entire water column here again. I'll make a reach cast across strong current between my fly and my rod. I prefer not to do so but things are what they are.

I cast thirty to forty-five degrees off the current vector. I'm fishing very short stretches because drag will hit quickly. Sometimes drag is excessive after five feet of drift. Generally I can get a good dozen feet. There's no sense intentionally casting where you see the presentation will be ruined and the fly will look like inanimate detritus slashing through the current in an unnatural fashion.

I again can be fishing full-column depending on bug activity.

The fly drifts downstream no father than my feet or just slightly behind. When the fly drifts this far, it is because I want the recovery and re-cast not to have a chance to bother spotted fish. Otherwise, we're making short casts across the water. taking a step upstream, and repeating.

The difficulty in controlling a fly makes the upstream move from the  recovery and re-cast productive.

Attempting to cast and drift over fish while moving downstream will soon produce the arrows of fleeing fish you didn't know were present but which your angling efforts alerted and alarmed.

Here I am firmly fishing to habitat. I've been limited in my approach because of environmental conditions and casting laterally across the flow is as good as it gets. You read that correctly: the across method is a desperation approach.

I'll cast across perpendicular to the current or slightly upstream. I'm usually fishing the top one-third of the water column.

This year, I will work on swinging my larger fly through the water "flying" it in the bottom two-thirds of the column more as one fishes to steelhead. I'll have to work before I can report back on that approach.

Here, I'm fishing in the top third and I'm fishing highly motive flies. The hackles are long and "flouncy."

I'll make a reach cast to put an immediate mend in my line. I'll use repeated vertical mends from the famed "greased line" technique.

I need to manage my mends to control the line and first parts of the floating leader but not jerk the terminal end with the fly attached. This takes control, finesse, luck, and coordination I regret to do not readily possess. Every season I have to spend a couple afternoons re-learning the precise motion that becomes an automatic muscle-memory judgment by June.

This is an area fishing "the-only-way-to-get-there" type of compromise. I will allow the fly to swing at the end of the coverage and -- timber snags permitting -- I will pursue and actively fish the dangle. I will do this fish-to-the-dangle rarely.

Mostly, I'm fishing to a ten-foot long stretch of water and will fish that water, then move upstream and fish the next bit. I'm not sweeping or swinging. There's a lot going on to keep a good drift but managing that action across one hundred twenty degrees of arc ? No thanks. I'm not that good.

I'm resigned to "as good as it gets" on this one. Short controlled drifts predominate.

The Across and Down

I'm casting forty-five degrees or more down from the current. I'm fishing a tight line at least part of the time. I might be stack mending at the end or I might be using the greased-line repetitive mends as soon as the fly hits the water.

Most often, this is indeed your grandfather's swing through a broad gentle flow when the water might hold fish but where your reading of the flow gives no immediate indication of where in the flow the fish are concentrated.

I'm fishing in the water column most often here. I'm maintaining at least a frequent direct contract with my fly.

I'm saying a little incantation designed to bring one of those Todd Moen filmed trout thrashing-up out of the water on a super-aggressive hammer take.

I've been known to mess with my gear, pack a pipe, open a beer, eat a cookie and sometimes all of these because it seems to be a fish-inducing sort of action.

Cast. Step. Think about the next more technical piece of water. Cast again, step. Play with the dangle. Step.

I'm fishing here in the full water column. Hazardous wading has positioned me so that I have to approach a fish or an especially good piece of habitat from upstream.

I'll try and position myself low and about thirty degrees out of the flow line.  I'll cast well upstream of my target and use large lift-mend stack-mend actions to release arm-lengths of line into the flow. I'm watching my tippet.

I'll try to control my drift so that I cause a lift in the soft-hackled presentation at or slightly in front of the likely trout. I'll direct an errant drift down to one side of the trout and us a roll-cast pick-up to lift the fly cleanly from the water downstream of the fish.

Often, I'll do some sort of perry poke type of side delivery after a pick-up to dump the line into the flow well ahead to the trout then I'll work like mad to re-position line and slack in my hand for another go.

I don't read about a lot of success with this technique but I'll say it is deadly for me.

The key? Innocent eye approach. A trout doesn't have great memory recall. After I make my first approach, I'll recover, reload, then count to at least twenty before trying again.

I've caught trout after seven unsuccessful passes. You wouldn't think you'd get more than one but you do ... if you're cautious.

I'll work up illustrations and have a little to say about each presentation here in successive posts.

Soft-hackles can be actively fished as one would fish any other food imitation or lure. They can be fished in all these techniques successfully. It's the presentation that matters and with a soft-hackled fly, you're on a downstream run to the ice-cream shop as far as presentation goes. The flouncy hackle almost does all the work for you.

The fly is imbued with the illusion of life. Just don't mess it up.