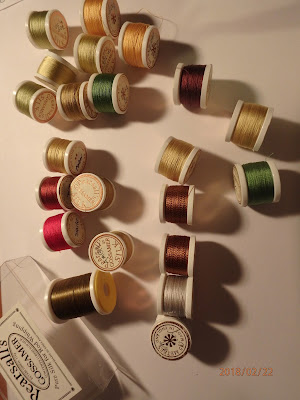 AT left, treasure. It's a pile of Pearsall's silk thread from Lauren at The Painted Trout (link at right), my local fly shop. I suspect it is among the last spools I'll see.

Lauren asked her supplier to "send six of whatever you have in stock." Alas, no purple. One primrose ( I bought it) and a few orange. There are some other colors.

I picked these up Saturday after doing a little morning tying in the shop. Lauren and John helped me label the thread because I can't see the color and have to write it on the spool.

The fellow has tied soft-hackles forever. He thought he had some stockpiled thread. Turns out he didn't. I know how I'd feel if Bushmill's stopped making whiskey.

I bought too much thread (about 3 years worth). I'll use it. I used five spools last year (I save the little spools) so that was a lot of soft hackles. I tied in excess of 500 for sure. I gave a lot away. I'm converting folks.

There were several colors that I've neither seen nor used. 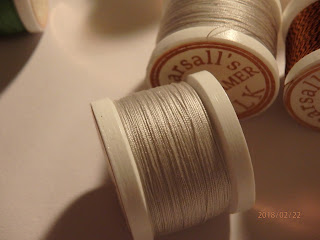 At left, some sort of light color. I thought it was salmon but I have grey written on the spool. Maybe I didn't buy any salmon thread.

Anyway, this very light thread is going to do well for me. I see a lot of twisted strand ribbing out of these two spools. I'll use it for close ribbing over dark thread bodies and have a nice "zebra" effect to test.

I've looked at Steve Bird's wasp/bee pattern for a bit and wonder, is the basic stripe ignored too often? I'll find out. 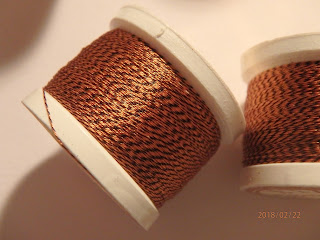 Some sort of new (to me) metallic sheen silk. Says "brown" on the label where I wrote it. I like it.

We'll see what kind of pattern it makes on a hook shank. 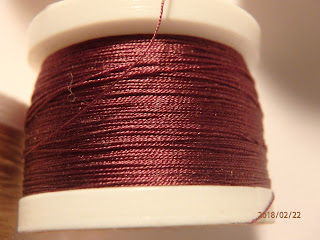 Lastly, this "dark claret" as I've got it labeled is wonderful. It has this translucent lushness when I dip it in water.

I'm going to use this for some ant patterns. I'll cover lashed foam bits with this thread and see how it goes in the end.

Yea, I know. Ants? Like how could you make an ant pattern better. Trout eat them when they see them, mostly.

Ahhh Hah! Let's get rid of that "mostly" business.

Anyway, I'm going to miss the small bobbin and the lovely feel of Pearsall's when it is all gone. I'll probably have to break down and buy a 1000 yard industrial bobbin of it sometime and spool it off on the little guys.

I know. Doesn't sound like a bad idea, does it?