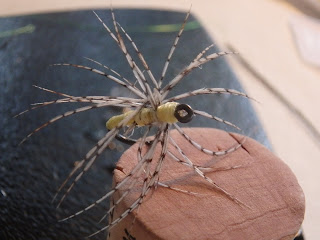 I've been at the vise last night and this morning.

The week saw me with a fierce cold which won most of the rounds on points. It took a huge effort in the 14th to score a knockdown and then to batter him into submission in the 16th under the 3-knockdown rule. Looked bad for the hometown guy for a bit. 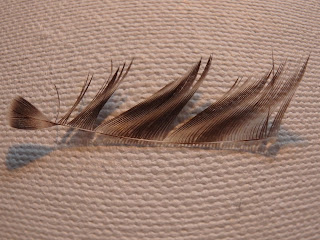 Here's a barred hen feather stripped and prepared for the tie-in. Two turns of this feather is just about the proper "sparse" to resist clumping the barbs in the stream. 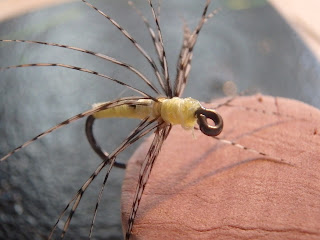 Our Partridge-and-yellow using a properly prepared partridge feather. I think this one I tied on an Orvis big-eye dry-fly hook in #16.

No, the big eye hooks aren't worth it. Gimmick. I bought three packs in Chicago at New Year's and won't do it again. 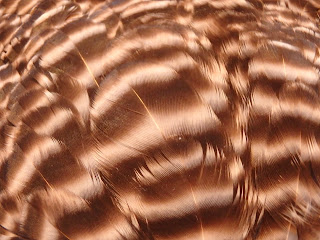 Here's a look at my barred hen skin. Cheap. Effective. You can spend more on a coffee than this skin ran. A partridge skin can be an investment. A hen can be change out of the truck cupholder. Both work. 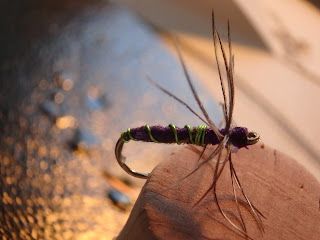 Here's a  Snipe-and-purple with not particularly good wire work on the aft segments. Still, note the sparse hackle from the well prepared feather. That's the barred hen from above. It's a lovely motive thing in the water.

It's not going to be a star in any pattern book but it'll catch fish. I swear I thought the wire wrap was nicer before I took the picture. 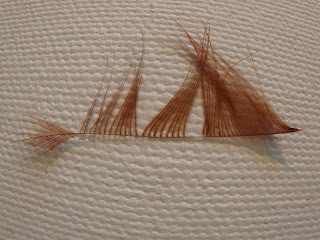 A ginger hen feather I've prepared. I love this ginger skin. The barbs are "like butter." 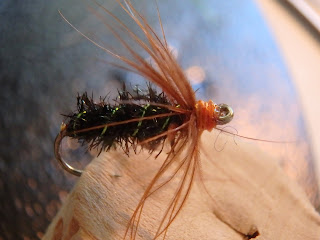 A little Herl-and-X fly I tie in yellow, orange, and scarlet.

This little beast is in the pattern books of the giants. Jim Leisenring tied a version of the Coch-y-Bonddu which is Welsh for "the red and black." My version is closer to that tied by Datus Proper [ referenced What the Trout Said, p.39 ] to imitate a beetle.

I'm something between a fat nymph and beetle on this u002 Umpqua dry fly hook in #18.

Notice that three turns of the prepared hackle makes for a "full" fly intentionally. I want lots of movement here. A drop of floatant on the nylon tippet all the way to the fly does well for morning midge surprises,

Degreased as a dropper, the fly takes its 50-50 share of early evening brookies. Wonderful fun.

Ten degrees here this morning. Snow due tomorrow into Tuesday. The Manistee and Au Sable are both in "drown-a-bear" mode right now. I wouldn't say blown-out; but, certainly they have too much cold water to risk wading.

Won't be long. Time to fill the boxes.