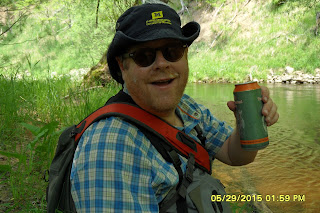 First, I want to wish The Senator a happy birthday. Here he is from  May '15 when we had a snack of Girl Scout cookies streamside ... before I tumbled into the stream.

I think he was actually predicting such an action in this scene.

If he manages to get on the stream in the next six months, it'll be a minor miracle.

I want to cover some seasonal hatches here in the north-central and maybe pass on just a few of things we all knew last spring but might have forgotten what with all the brain cells that died over the winter. [  Note to self: drink better scotch. ]

The Blue-Winged Olive is a mayfly.

It lives in almost every aquatic micro-environment from cobble to gravel to leaf detritus to woody debris. We'll speak here of the general Baetis related species though the genera encompasses members from the  baetis, diphetor, labiobaetis and acerpenna. There are many many sub-species and in this instance the fly anglers' lumping together the various members as BWO is quite convenient.

The general BWO is multivoltine which means it has many breeding cycles throughout the year. It's more bunny -- many yearly broods -- than  deer -- single fawning season.

All of this means the BWO is a year-round companion on most eastern streams. It is also highly likely to be the first true hatch a shoulder-season angler encounters.

Yes, stoneflies are also quite possible to be early-season encounters.

Unlike the BWO, the trout frequently ignore the stoneflies but for their nymphal larvae. I've watched the stoneflies emerge and crawl and fly and land be completely ignored by feeding trout in the mainstream. I've also seen trout pick stoneflies off root balls as they emerged.

Why the different behaviors? Ned the Trout won't tell me. Stubborn bastard.

The BWO do usually have the trout "looking up" and at least in my experience, I've not observed the same disinterest among our browns towards the BWO as they've shown me repeatedly on stoneflies.

Yes, I do carry something for the little black stoneflies in the spring in case they are hatching and the trout do notice. I'm not dogmatic enough to be an idiot.

Also, the BWO is frequently dislodged from his forage ground and cast into the flow during the usual spring high-water season where flows vary widely week-to-week. He's in the water column even when not actively hatching and the trout know this.

Hatches in the cool season of spring occur mid-day and slightly past.

On overcast afternoons, the hatch might continue sporadically until the shadows crawl back and cool the water. Following days where the nightly low is above freezing, you can bet on some afternoon BWO hatches starting. These can be individual localized sparse hatches or they can infrequently be mind-boggling blanket action. Best advice: be prepared.

The BWO emerges from the water film poorly.

Mortality of the hatch is high with a good number of cripples and stillborn drifting at or near the surface. Even successful duns might drift two or three cast lengths downstream from where they successfully crawled onto their shuck waiting in cool weather for their wings to harden and flight to be possible.

The trout love this. Look for very subtle bulging riseforms "sipping" flies with no bubble telltales of the take. The mayfly simply disappears. Sometime the bulge is under the emerged fly. Sometimes it is immediately before the dun crawls out on a subsurface take.

Because of the good quantity of subsurface action, I like to swing soft-hackles below the surface just when I see something emerging. I'm usually too excited when I see an early season hatch to even bother to identify what it is by chasing down duns with my hand.

I put on a hare's ear soft-hackle flymph in an unweighted version and fish directly below the film.

Don't let this imply I have some sort of remarkable catching prowess in this action. I'm usually so excited with early-season trout fever that my fish to hand are brookies and rainbows. I'm a complete wildman on the river until I get past that "first dozen" trout count in the spring. Yes, it's been June before that threshold has been crossed in some years.

As long as no one is nearby to observe me tossing an eight-inch brown a dozen feet through the air on a too-excited hookset, it's all good. Right? I mean it isn't like it really happened or anything?

If you don't know what I mean, your winters are too short. I'm an occasional angler. I'm not a commercial-grade angler.

Strategies when the BWO is suspected involve weighted hare's ear soft hackles in searching swings until a hatch is actively sighted, then unweighted hare's ears swung under the surface film or cast to active feeding lanes upstream.

Size 16 seems to hit the sweet spot of the BWO activity.

Note that the BWO females return to the water to lay their eggs and several species (all ?) land on obstructions and debris then crawl underwater. Naturally, many of these egg-layers are also washed into the current and are served well by soft-hackles in the upper 1/3 of the water column. 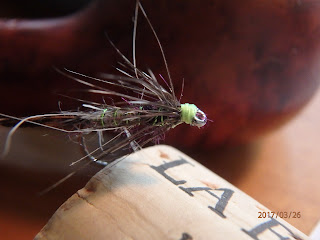 Abdomen: Hare's ear cut fine and touch-dubbed onto waxed thread. Chop the hare's ear if it isn't fine enough. You only need enough dubbing to change the color of your thread. If you are building mass into the fly, you're using too much dubbing.

Thorax: Herl - two strands wrapped with the microwire and twisted short onto the hook shank or something black -- like Wotton SLF in black -- again chopped fine and tied in a dubbing loop. I find too much of the material dissolves away when fishing if I just touch-dub the thorax. I like a dubbing loop here. The herl-and-wire will produce the most durable outcome and it should be favored.

Hackle: hen in rust brown or back. Sparse tie using the tip method. [ better picture here with my late-season variant when I use dun hackle. Same dubbing. ]

Head: liberal wraps of the thread as shown here (in chartreuse for no good reason). Finish with a varnished thread to keep any glue off the hackle. The weather is cold and so the bias towards a fly that has the greatest possible durability is a solid idea.

A free-body diagram of the fly (from a class hand-out I used once). I'm not sure how these diagrams show-up in photos so I thought I'd try it here. I am colorblind and so my illustrations favor the monochrome pen-and-ink style drawings. I'll have to hire an illustrator to color the things if I ever publish. 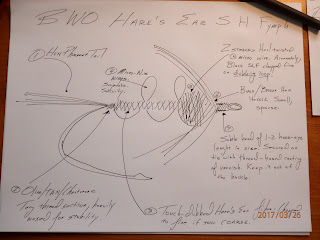 Next weekend: trout camping on the Au Sable with fishing on the North Branch.

It's only going to sleet a little. The trout won't mind at all.