Above, a panorama of the Boardman from the Forks Campground, Brown Bridge Road near Traverse City, MI.

The Forks Campground is an unremarkable series of eight small sites and pads. What is notable is that the campsites are steps from the Boardman River.

Here's a series of campsite snaps from Easter weekend. 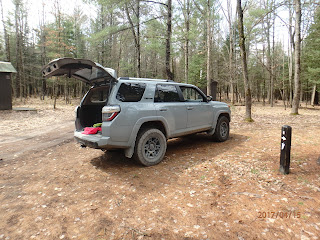 Campsite eight is at the end of the line. Here's the new trout car as I make camp. 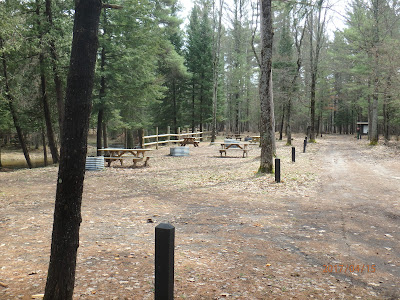 This is the line of campsites along the river. They're right out in the open without any barrier one to another, The river is just off frame to the left. 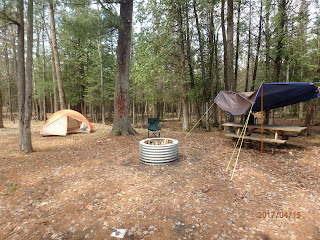 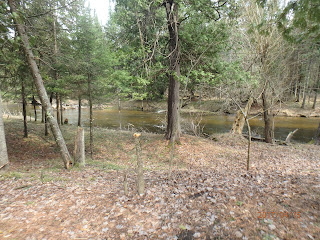 The river from campsite eight. 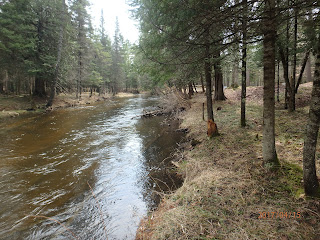 
The Boardman escaped the heavy rains of the last two weeks. Then, I arrived.

Saturday afternoon when the flows were moderate, the wind came up. It wasn't a horrible wind; but, it was a marginal five-weight wind. I fished some sinking flymphs and thought of throwing streamers on Sunday. I thought really hard about throwing steamers as thunderstorms started rumbling around five on Saturday afternoon.

The river is great here at normal flows. At the higher flows, the sweepers and submerged timber force the wading angler into current that just isn't fun. The bottom is mostly firm with some larger gravel that erodes under your feet in fast strong flows.

I only hooked two - neither to hand. Barbless hooks, downstream. Anxious playing and LDR (long distance release). Upstream fishing: I had no takes. I think maybe I should have used more weight on the line. I wasn't on the bottom or hung-up enough.

In retrospect, I wasn't consistently deep enough in the water column. I hate to add shot weight on my leader. I should have gone with a 3ips versileader. Maybe a 5ips. Had both of those. Probably would have helped.

Putting my faith in more serious fishing on "tomorrow" was a problem, too. I've been bit by unpredictable events before and this time, the river rising nearly another foot was my undoing on Sunday. I counted on access at a spot I'd not been before based on a book that is now out of date.

It's a little early up north. Great camping, though. It's a sure cure for the civilization disease (CD). There's still some of that around the edges.

More trip report later with a visual profile of access in the area. I hope it helps other anglers.