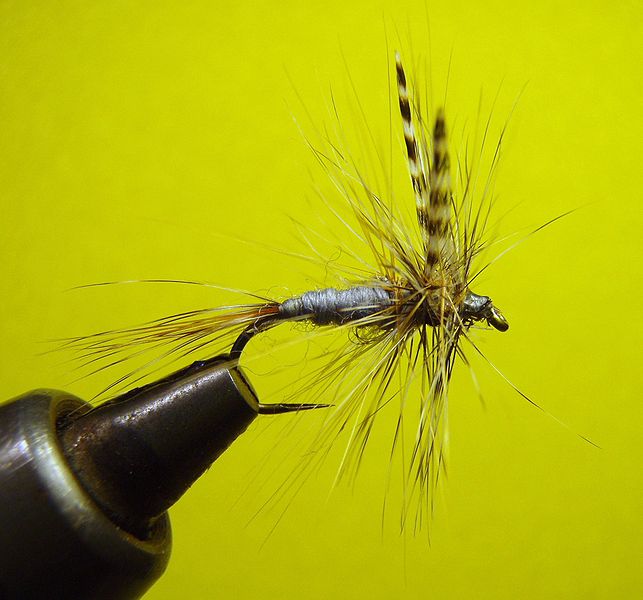 At left, the Adams Fly in a nice tie made possible by Mike Cline who granted this photograph copyright-free status as hosted on wikicommons. Thanks, Mike! (Oh, nice tie!).

At left, the Adams. It is in every box. I don't put wings on mine but am prone to include a tiny piece of white Antron as a centerpost so I can see them in the dusk.

The Boardman River in Michigan is where the fly first was developed. I'm going there this weekend on a trout camping outing.

It's spring. It will probably rain. The roads are crap this early before the commission has a chance to get out. No worries. I've a new heavy-duty trout car and no longer do I fear bad terrain. I'm fine with rain, too. Keeps the other anglers at bay.

Will not freeze on the Boardman this week since Monday night. That's a good sign.

I'm a little punchy. My wife says I've gone a bit off. It's the spring. I need to be in the woods. I'm going. You should too. 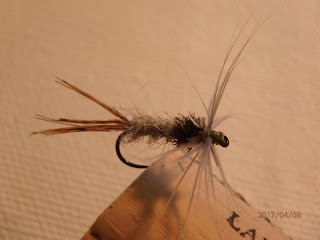 My fly photography drew some catcalls from a couple guys I ran into outside my flyshop. Here's a better image of the BWO Soft Hackle Hare's Ear. The hare is quite dark but I used better light for this photo and it shows up well.

Steel gray SLF and dark hare's mask dubbed together with a touch of possum in there too, Pheasant hen tails, waxed.. Herl. Dun hackle on this one. I use darker hackle early in spring but I grabbed this guy from my box of leftovers from last fall for this shot. 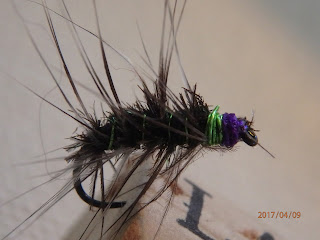 A fully plamered Herl-and-Hackle after Stewart's Spider. This fellow is a plump beast because he also does duty as beetle bait here in later spring. I do occasionally chase bluegills.

This is on a size 13 barbless TMC hook and I probably will end up drifting a few along the bank in brookie country this weekend.

I tied more than a dozen last year and have none left. They work. 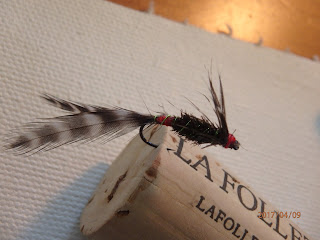 A hackled streamer using grizz feathers for tails. Small. I am tossing these next week in the morning on Mill Creek. I'm going to try and fish this sort of streamer by imparting my own action to it instead of the "dead drift."

I saw Jonathan Barnes do so and I want to give it a try. Small stream work with streamers has been pretty weak for me. I think the action of "dancing" the thing has merit. 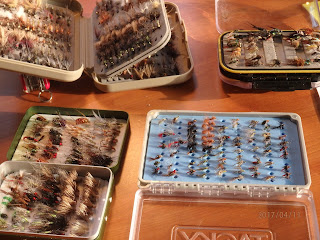 Outing boxes sorted and ready to go. I need a few more scud for the Driftless but I'm pretty good right now through early June.

I'm a lazy caddis and Partridge-and-Yellow sort of fellow for most of the summer turning to Partridge-and-Orange later towards fall.


I'm all excited in spring but come fall, I'm convinced a stray bit of cork can be presented well enough to catch trout. 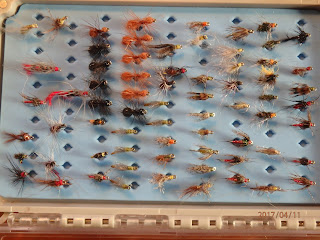 My concession to Ed Engle. I read his book last spring and tried to decide on pursuing the 20/20 club. I did so only halfheartedly.

This year I made the effort to tie some very small soft hackles. There are some PTN and some Hare's Ear in here too ... though the Hare's Ear are actually tied with beaver. I like its very smooth texture quality for flies in the film.

The ant patterns in this Tacky box are tied on #17 hooks.


I'm not Ed Engle but I have wanted for small flies on occasion. I'm going to try and use these extremely small flies this year. I've 7X and an arsenal of several 3 wt rods.