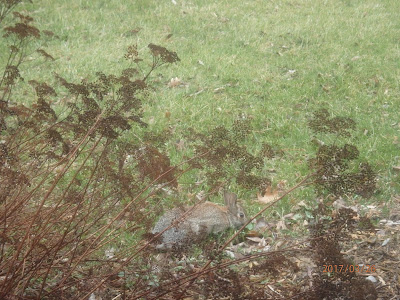 It's spring and Lou the foxhound is unhappy. He has the heartbreak of bunnies in his meadow, in his yard, in the woods. This must be a bunny year for us.

Alternately, the four brush piles that I didn't get burned last fall might have contributed to the heavy carry over.

My local fly shop had a talk on a restoration stream.  I got to see a bunch of folks I run into only once or twice a year. I fondled gear. I talked about the opener.

I complained that the rivers are in the trees and one or two of them seem to be actively plotting a drowning: mine.

*** Disclaimer *** I know Hendrickson's have three distinct tails. I assure you that the trout has no idea how many "three" might be. My wife's cat is a predatory mammal (predators have higher reasoning skills) and can barely handle the difference between "one" and "more than one." There is no way a trout is going to turn from your fly because it has two or five tails. No. Way. That. Happens.

Above: Hendrickson dun, male. Photograph by Judy Gallagher in 2013 as stored on wikicommons and available for use with the attribution we list here. Judy: nice picture. This one is listed as on the SFSU Field Campus in Bassetts, CA. Males have big red eyes and I thing those eyes are red. Color is lost on me. 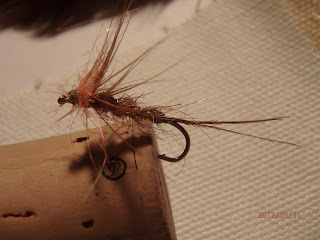 At left, a soft hackle flymph I've worked up based on the Hendrickson mayfly. It's buggy. It uses four to six turns of non-lead so has enough mass to work on a -- gasp -- jigging sort of action.

It's basically a rust-brown hare's ear (I use SLF in rust blended with gray) with added waxed tail from pheasant rooster, a rust hen hackle, and an orange UV seal-x dubbed collar.  Size 12.

I like to let these sorts of weighted flies "hover" downstream on the swing through troughs and across drop offs. Works for me. Probably not the only way to fish these sort of bottom column flymphs but is what I've done.

I've not made a species specific flymph before because I'm a presentationist and a representationist. I don't subscribe to "match the hatch" but it's spring and so in that spirit: a try. I usually fish "black", "brown", and "not black or brown" for flymphs.

These are designed to imitate the mayfly itself either dun or adult. I have had evidence of fish preferring the male to female or female to male. I think. I'm never quite sure why a fish takes a natural nearly like my fly but ignores my fly on repeated drifts. Does anyone really know?

If I fish the Michigan Opener and find any Hendricksons (snort of amusement), then I'll fish one of these two attempts.

I should add that the usual Michigan opener is a bug-free zone for me. I'm hoping for intermittent driving rain with occasional sleet this year. One, that'll really cut down on the number of other anglers hanging about and; two, Hendricksons love to hatch when the weather is absolute crap.

I've been skipping the opener weekend because I hate combat fishing. Might go this year if the forecast is ugly. 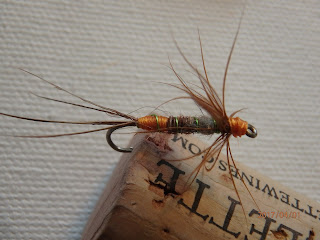 Collar: UV Seal-X orange dubbing or, as on this one, an exaggerated ball of Pearsall's orange thread.

The fly's shape is a relatively stout tube for a soft-hackle fly. I'd say it is three times the diameter of a customary thread-bodied fly.

It'll float as a dry in the surface layer with a drop of floatant else it'll behave like any soft hackle. It is a buoyant beast, however. There is an underlayer of waxed silk under all of it.

I tested these in the fly tier's usual method: I dropped it in my glass of water and saw how many I could tie before it sunk. I tied four more before the fly started to sink below the surface.

I've not fished it so no real voice of experience. Use at your own risk.

I was playing. I will fish them.

Maybe I'll give them away. 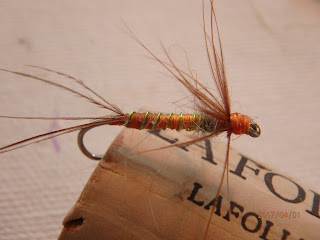 Collar: UV Seal-X orange dubbing or, as in this one, an exaggerated ball of Pearsall's orange thread.

This fly behaves as a normal soft hackle in the glass of water. I heavily wax my flies and this one will float in the film through three more ties. Maybe more but I needed fresh water. End of test.

I do fish a Partridge and Orange and find it a reliable pattern all through the season. Will this version do for Hendricksons?  A pure thread-bodied P-and-O does so sure, why wouldn't it?