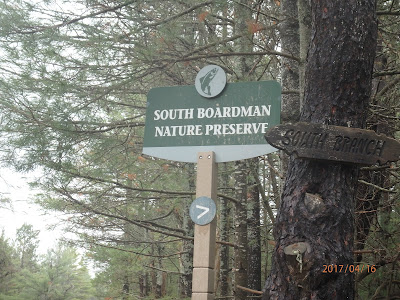 This little outpost of nearly fifty acres is a rugged managed conservatory right along the north side of the Boardman River's southern branch. The sign says South Boardman but the legal description says South Branch. Go figure.

Here's a panorama from atop the central plain at the back of the property looking just south of west.

It's a lovely short meadow out of which I chased both turkey and deer as I made my way across.

The meadow once extended to the river proper but now bramble and low alders inhabit the fringe. 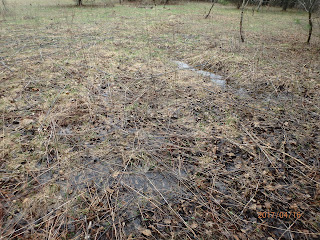 Marsh muck from the sudden weting that extended for forty yards from the river bank down on the meadow's lower plane.

Below is a typical image of this upstream portion of the Boardman where, for a small but pleasant hike in a near park-like setting, you an have relief from the vacation fisherman I've heard descend on the Boardman during the summer. Certainly new construction in the resort region is booming.  I'd expect congestion on the more accessible parts. 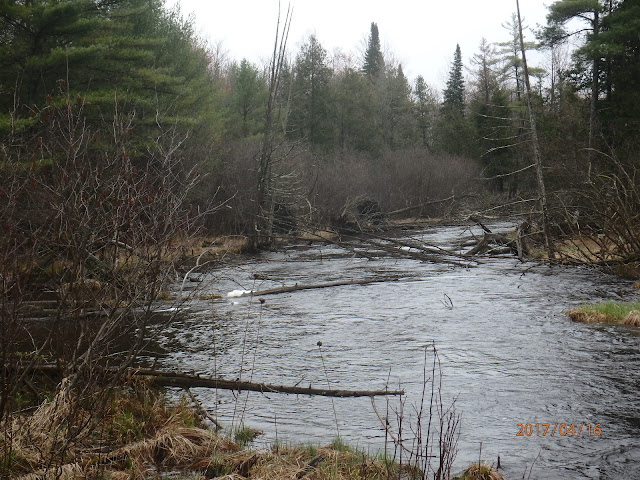 Yes, there are a lot of deadfalls right now. That's brookie habitat not unlike portions of the Jordan.

There are no canoes on this section and thus no efforts to clear the river's course.

Fishable? Certainly. The water was quite high at the time of the snapshot.

Summer pressure may well make on consider a more difficult wade to counter a flood of other anglers.

Off to write. There is work to do.

More to follow in this series on the Boardman.