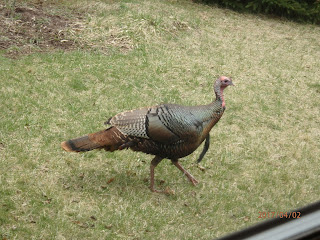 At left, one of my resident jakes. Not strictly fly fishing gear but I do collect the odd feather from the local turkey activity.

It's snowing sideways. Not even the Thursday fly shop reports could do much this week to put "flurry" spin on the weather. The Mason Tract on the South Branch of the Au Sable is 200% over "drown the bear" stage for my wading.

My local water -- the Huron River which indeed does flow into mighty Lake Huron -- is right at flood stage.  My restoration creek Mill Creek set a new high flow measurement for this date today. It's got a foot to go before "flood" so there's that.

It's spring. High water won't last forever and when it recedes and clears there are some very reachable opportunities for the fly fisherman. The clearer slower water will be close to the banks.

No reason to dredge the horrendous mid-channel flows which make contact nymphing especially tough at "roaring" velocity. Yes, there are fish under those flows in depressions. No, you will not be able to detect a strike unless the fish hooks himself.

Let me correct myself. If you can detect a strike while nymphing mid-stream at three times customary high-water flow, then you are at or near the level of commercial fisherman. You are an adept in the league of the fellows who catch the "usual" trout. I'm excited about any trout and that makes me an aspiring "occasional" angler. I'd like to reliably catch the occasional trout.

I still catch the "infrequent" trout.

Anyway: high water. The edges will harbor fish in surprisingly shallow water where you wouldn't otherwise find them. They'll be a little more spooky and you'll need to fish to habitat instead of fish. However, they'll be more fish in less water than is usual for early season and concentrated fish can be catchable fish.

I'm going to the stream next week early in the mornings. I'll be at the water at first light before the behavioral drift has fully stopped. I'll be fishing bank lines, breaks, and anyplace the current slows to a slow walk or clears to less than milkshake.

I haven't been out enough. Morning before the day gig allows that to happen. 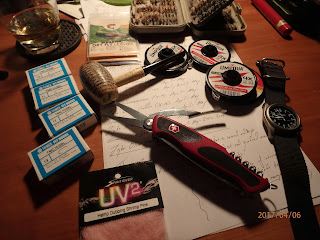 A year's supply of barbless hooks. Using the Tiemco this year. I liked the Hends but my local does business with Umpqua and Tiemco so I give them the business. Fine hooks.

They come packaged in paper slips just like unmounted diamonds. Yes, I've spent a lot of time looking at diamonds. I have a jeweler friend who is a rock hound and I've a thing for women I cannot afford. I know diamonds.

The size 13 TMC103BL are especially nice mid-season wet fly hooks. The wire is extra-fine so a dubbed spider can go from sub-surface to dry fly with a slight drop of floatant. That's a nice trick. It works, too.

Also, the hooks while small have an extra-wide gap that really help the hook-ups when your on-river habits involve "screwing with your gear."  When I'm comfortable and in-stride in mid-season, my attention can wander: the pipe; the odd bird on the sweeper branch; that odd looking nymph in the drift, a pattern in my box I should swap out for what is down on the dangle even now ...

UV dubbing in pink because I'm going to the Driftless and, well: Pink Squirrel.

I know I know. Look: pink squirrel. That's all I'm going to say. You can look it up.

I use the Spirit River for this because it says "Pink" in large print right on the package so I know what the color is when tying. You try sorting this stuff when you cannot see color. Labels are selling points.

A replacement  field watch . My Bertucci from last year had a problem with the second hand and they replaced it and gave me a new band. Great service.

A replacement Swiss Army pocket knife. This one is the "gardener" to replace my "picnicker" of a few years ago. This is a large heavy knife with sheers -- not scissors. I use a Solo bush stove for camp cooking so spend a lot of time processing sticks and such into small bits of wood. The sheers will make that more pleasant than breaking bits by hand for an hour. I tend to process a whole weekend's worth of wood on the first night.

A Missouri Meersham pipe for on-the-water use. Mark Twain smoked one. It's a great pipe for a very little folding money. It's a lot more reasonable to carry on the water than a lovely Peterson piece of brier let alone the more expensive Savinelli or Dunhill models. Save those for staged pictures and the campsite. I too shall return.

A Cuban cigar in a tube. A trout buddy brought that back for me after his three week outing to the island here in March.

A fly box filled with my own spring ties (but for the drakes ... mine aren't very good and so I was given a half-dozen by a better tier than myself here last Christmas.)  This is my early spring resource box. I'll carry it in a high pocket and use it as fallback. I like to carry a very small day box. Sometimes in spring I can be caught short if the day changes.

How about your day? Are you ready for the change? It can go from soup to sun in an afternoon here this time of year.

The most important fly fishing supplies for early spring? A full tank of gas and a spouse who won't mind if you miss a few meals.

An understanding boss helps, too.